Home Horse Riding and Training Natural Horsemanship Good Advice: Off Course in the Round Pen

Q: How can I get my horse to longe or go around the round pen in a complete circle? He keeps cutting in to the middle and making his circles too small.

A: Cutting in is a common occurrence in the round pen. Your horse is only obedient if he goes on the path that you choose. If he is veering off course, he isn’t paying attention to you, and he thinks he can go where he wants. 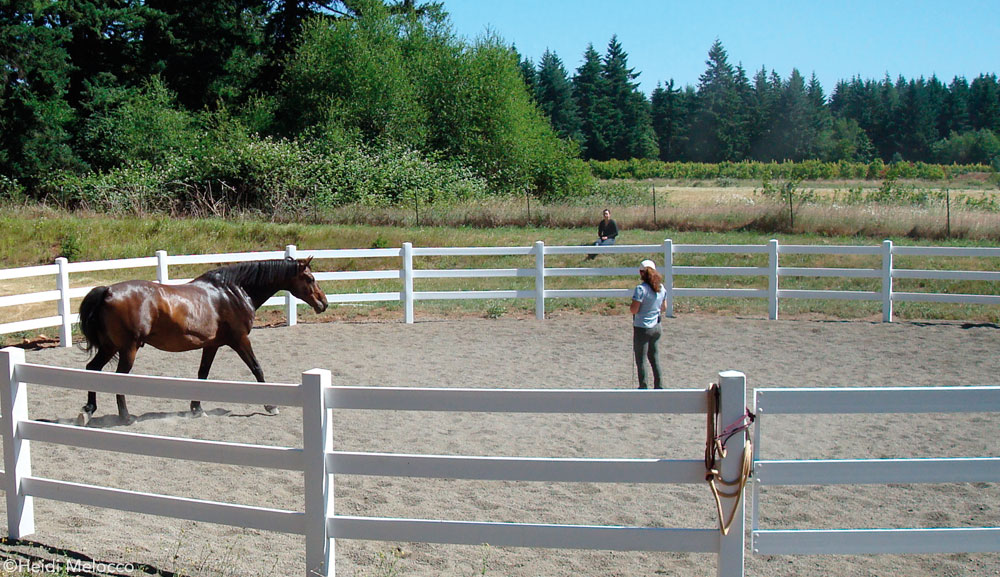 Working in a round pen can be intense for the horse, and it’s possible that he’ll have an emotional outburst. Because of that, make sure that your round pen is at least 5 feet tall and made of a solid material that won’t bend or shift if he moves toward it. Also make sure you have a tool (such as a stick and flag) to defend your space and direct your horse.

Ask your horse to trot in the round pen, and be aware of when and where he starts in to go into the middle. He knows that he’s cutting in, and he finds that he benefits in some way. Is he being lazy and wanting to make the circle smaller? Or is he chopping off one side of the circle so that he’s closer to the gate or to the herd? Watch his path closely. Whatever his reason, the fix is to take away the benefit for him and teach him that it will be easiest to follow the path you dictate. You need to change his direction to get him working harder at the moment he chooses to go off course.

As soon as he comes off of the track, take a step to cut him off (using your body language and position to change his direction while staying safely out of his way), and use your stick to cue him to turn toward the fence. Then let him continue in the opposite direction.

Watch again for his feet to come off the path, and at that point, turn him into the fence again. Turning is difficult for the horse—it’s not easy for him to stop, roll back on his hocks and turn toward the fence.

Soon, he’ll learn to take the path of least resistance and stay to the outside of the pen because it’s physically easier than cutting in. When he turns toward the fence, it’s the opposite direction from what he wanted. You are choosing the direction and he is not in charge.

If you’re working on a longeline, you can’t turn the horse away from you, but you can move more aggressively toward your horse’s shoulder and point your flag toward that point. You’ll drive him forward and make him speed up any time he steps in toward you.
He’ll no longer find it easy to cut in to the middle; in fact, he’ll have to work harder if he tries that again.

Julie Goodnight shares her lessons on her RFD-TV show, Horse Master (also online at tv.juliegoodnight.com), and through clinics and expos. Heidi Melocco (www.whole-picture.com) is a lifelong horsewoman, equine journalist, and photographer.