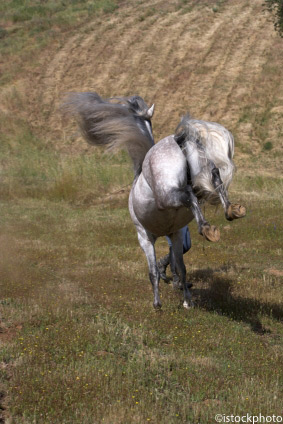 With Nicholas Evans’ best-selling novel The Horse Whisperer and Robert Redford’s movie adaptation, “rogue” horses like the fictitious Pilgrim got quite a bit of attention. Pilgrim was described as a horse with such overwhelming psychological problems that it was dangerous to approach him for fear of attack. While there aren’t many real horses with such “in-your-face” aggressive tendencies, a few such creatures do exist, although generally they’re not created by a run-in with a semi truck. The point is that rogue is a label typically used to describe a horse with significant and potentially dangerous behavior problems, such as deliberate and consistent charging, kicking and biting on the ground, or intractable bucking, rearing or bolting while under saddle. What this all boils down to is that a rogue horse is a serious threat to human safety. And unfortunately, these horses often end up with novices in search of affordable horses, who don’t yet know how to evaluate a horse’s training. What can you do if you find yourself faced with this kind of an equine nightmare?

The good news for us is that domestic horses have been bred for centuries to be tractable and trainable. So, while a few cases of pathologic behavior do occur naturally, the vast majority of these rogue horses are created, not born.

Just like in humans, there can be physiologic abnormalities associated with deranged behavior such as hormonal imbalances or brain and nervous system defects. Some of these problems tend to occur with greater frequency in horses that are the products of severely restricted gene pools (inbreeding), or in horses that develop tumors in hormone-producing tissues such as the ovaries.

High levels of naturally occurring reproduction hormones can make a few horses nearly impossible to deal with. This can be a particularly serious problem with certain stallions, since for them aggressive behavior serves many adaptive purposes in nature. Successful stallions utilize aggressive behavior to defend their harems against predators, to battle against other stallions for control of mares and to drive their juvenile offspring out of the harem (a natural defense against inbreeding). Likewise, hormonal signals can distract certain mares in heat to the point of aggressiveness and make others fiercely protective of their offspring.

But the vast majority of rogue behavior is not a consequence of nature. Instead, it results from severe mistreatment, the lack of human handling, or by realizing that bad behavior causes good things to happen—in other words, bad training. Abusive treatment brings out a horse’s fight-or-flight tendencies, so many horses cope by behaving desperately and often aggressively. Similarly, extreme fear in a “wild” horse unaccustomed to human handling can lead to desperate and dangerous behavior.

Finally, if a horse does something dangerous and finds it gets him out of an aversive situation (such as work), he may be inclined to try it again. As with people and in particular children, if inappropriate behavior has a rewarding outcome, it will stay in the animal’s behavioral repertoire. For example, as the director of the riding program at a children’s summer camp some time ago, I was responsible for the care and maintenance of the 50-horse riding string. Many of these horses were leased out to private homes over the winter, and I had to collect them and return them to the camp in preparation for the summer season. Frosty was one such horse who was being maintained by a family at a boarding stable a few miles away. There were beautiful riding trails connecting that boarding stable and the summer camp, so I had someone drop me off at the barn so I could ride the horse back to camp. Little did I know my charge had learned a few nasty tricks to avoid working for a living and was known as something of a terrorist around the barn.

Thinking I was dealing with a child’s horse who had been used in lessons all winter, I climbed on bareback and hit the trails. Ten or 15 minutes went by and all seemed well, when suddenly and without warning he spun out from under me and galloped back to the boarding stable. I hobbled back to the barn on foot and found him in his stall contentedly munching hay. I brought him out and climbed back on. Resenting this annoying interruption of the plan for the day, he pulled the old spinning trick and within 10 minutes had again returned to his meal. I hit the ground a little harder this time and ended up with a forehead that looked a bit like Gumby’s bump. Now I knew I was dealing with a horse who had learned to use nasty tricks to get his way, so I developed a plan to curb his self-rewarding behavior with some training. Unfortunately, his conditioned response had become ingrained and he proceeded to try his usual tricks the next time I rode him. This time, however, he did not achieve the desired effect of unloading me. He soon realized his reward was not forthcoming and stopped the inappropriate behavior.

Unless there’s an underlying physical problem, most rogue behavior can eventually be turned around with patience and cautious, consistent training at a pace determined by the horse’s comfort level. As John Lyons states, proper training should leave the horse calmer at the end of a lesson than he was at the beginning of it. Recognize that in certain cases, reforming a rogue may be a dangerous undertaking best left to a calm, experienced and patient professional.

So what is the best course of action to take if your horse’s behavior qualifies him as a rogue? The first step is to rule out any physical causes for the behavior. This can best be achieved through a thorough examination by a veterinarian. The cause of many behavior problems can be identified by careful palpation and blood screening tests. Once the source of the problem is found, there may be a medical solution that your veterinarian can bring to your attention. If the cause of the dangerous behavior is related to reproductive hormones, the solution may be as simple as castration for non-breeding stallions or hormone therapy for mares.

If you’ve ruled out physiologic problems and you’re still left with a dangerous horse, try to figure out the cause. Can you uncover a history of abuse in your horse’s past? Has the horse been neglected? Was he a victim of training shortcuts and brought along too fast? Understanding the nature of the problem can help you form a successful training program to solve it. Honestly assess your own capabilities. Do you have the patience, knowledge base, physical ability and time to solve the problem yourself? If not, seek out a reputable trainer with the experience your horse needs. Don’t sell the horse until the problem is resolved, unless the buyer is completely aware of the horse’s problems and has both the experience and the commitment to work them through. Remember, “problem” horses usually get passed from hand to hand without getting fixed, ending up mistreated, put down or worse—killing someone.

It may be too late to change the events of a horse’s past, but you can certainly influence his future. The behavior you see today does not have to continue. Bad habits can be changed, training mistakes can be resolved. Believe in the ability of your horse to adapt and reform. Horses, like humans, are never too old to learn, and generally, unlike some humans, horses seem more willing to forgive.