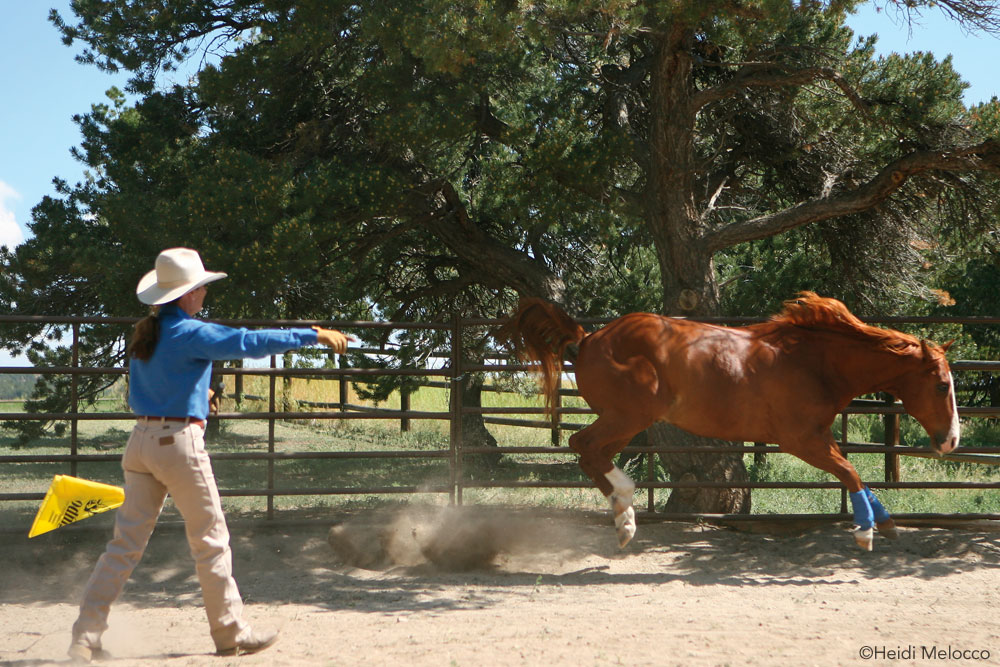 Q: I’d like to work my new gelding in the round pen and have him focused on me. Instead, when I turn him loose, he begins trotting or cantering around quickly before I even give a command. Why does he do this and how can I help him slow down and tune in?

A: When it comes to horses that are speedy or downright out of control in the round pen, there are two common reasons for the behavior. The first is that the horse doesn’t want to be there and is herd bound: he looks outside, kicks out and carries on to show you that he really wants to get back to his herd.

The other possible explanation is that before you got this horse, someone inadvertently trained him to run. Some people think round pen work is simply a time to run a horse around in circles—to wear him out before riding. But the truth is, there is a lot more to round pen work than that. In the second scenario, the horse may learn to run around in circles as soon as he’s turned loose. He thinks that’s what he’s supposed to do.

Either way, you have a horse that is not paying attention to you and probably has no regard for you. In the round pen, the first thing I want is to control the horse’s direction and speed. To control the horse’s movements, you need to understand the horse’s driveline. Imagine a plumb line down from the horse’s withers. If you look or step in front of that vertical line, you cue the horse to stop and/or turn around because you are blocking his path. If you aim your eyes or body behind that line, you’re pushing the horse forward. You use your position to either drive the horse forward or cut off his direction.

Use caution, as the round pen can be a pressure cooker for the horse. You have him confined, but you’re chasing him as if he was out in the open. That can cause a horse to be emotional, to kick out, to try to jump out of the pen, or to simply feel uncomfortable until he understands what you’re asking for and accepts your authority. Be careful; it’s easy get kicked or run over in a round pen.

Any time you’re in the round pen, make sure to have a flag or stick with you to help enhance your cues and defend your space. If you’re working a horse in the round pen, it’s probably because you need to get his attention and establish that you are in charge. The flag will help you get your horse’s attention, and if he disagrees with your leadership, it’s possible he could charge you; make sure you have a tool to defend your space if needed.

I like a flag so that I can wave it and I have a way to signal the horse visually without touching him. If the horse were to become aggressive, having the attached stick helps me defend my space. You can’t predict how a horse will react when he is learning to follow your round pen cues. Kicking and charging are normal horse behaviors and you need to be prepared.