Ever visit a building site before the walls go up? There’s plenty of activity as construction workers install plumbing and electric and pour the foundation, which are all essential—although hidden—aspects of a well-built house.

Once you’re in the completed home, you won’t even think about those early steps, unless they were done wrong or are missing altogether. If the walls are cracked and there’s a water leak, you’ll know someone didn’t do their job correctly in the beginning. You still have a house, but things will constantly be going wrong. 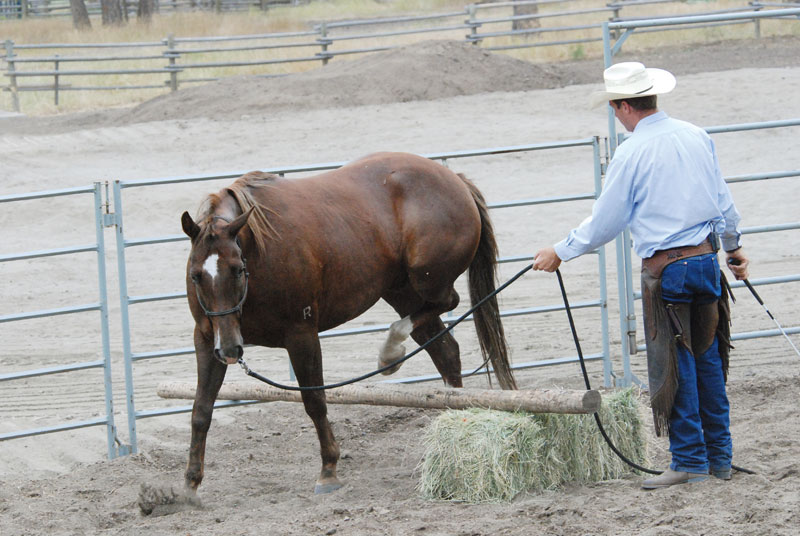 It’s much the same with starting a young horse. The crucial early stages of training don’t have the glitz and excitement that come as you prepare for a specific discipline, such as reining, pleasure or dressage. But if the initial foundation isn’t solid, you’re guaranteed to have problems later as you try to advance the horse.

“Foundation training is the most important training a horse receives in his life,” says horseman Jonathan Field, a trainer and clinician based in British Columbia, Canada. “This is what everything builds from. It is where he is taught how to take in information and adapt to being guided by a human. If the foundation is right, you’re going to have a horse that can cross disciplines and be used for many purposes for a long and productive life.”

So you have a 2- or 3-year-old you’ve either bred or bought, and are looking forward to starting his riding career. No matter how promising your young horse is, you must ask yourself two vital questions: Do I have the confidence, knowledge and experience to handle the foundation training? And, can I be the leader my horse needs?

If the answer is “no” or “I’m not sure,” you—and your horse—can eliminate much frustration and difficulty by having a trusted, proven professional start him.

Even if you have someone else do the initial training, you still need to have leadership ability once you begin riding your young horse. Otherwise, no matter how well-started he was, the horse will resort to his instincts if he finds he cannot trust you as his leader. You can’t blame him for this.

If you are prepared to start your young horse, you don’t necessarily need a round pen, but you must have a safe, confined area to work with him for the foundation training.

Some people start a young horse in a snaffle bit, while others swear by a bosal. Far more important than the tack you use is the knowledge you bring to the process and the awareness that training must progress in steps in order to be successful.

“Each step must be totally accepted by the horse before you go on to the next step,” says Field. “If you don’t go over the foundation backward and forward until the horse is totally accepting and confident, you will be dealing with the same issues down the road. You’ll have a 9-year-old who’s cold-backed and bucks when you saddle him.”

The first few times the horse is saddled are a perfect example of what Field means when he says the horse must accept each step. You can’t just say, “I’ve had the saddle on him a few times, so today I’m going to ride him.”

Your horse may or may not be ready for that all-important first ride. “The horse has to accept the ‘thing’ on his back, but also the constriction on his belly from the cinch,” Field points out. “When I saddle up a horse and the cinch is tight, I want him to move around at different gaits while on a long line or at liberty so I can see what he thinks of the saddle. I need to know he accepts the saddle and cinch before he’s asked to accept the rider.”

If the horse bucked or had an issue with the saddle, Field won’t proceed to ride that same day. The horse’s negative response indicates he hasn’t fully accepted the saddle, so it would be premature to ask him to accept the rider. Instead, Field would unsaddle, groom the horse and later come back, saddle up and let him move around more and then unsaddle him again.

“This is about creating a foundation where the horse accepts all elements,” he explains. “It’s not just pushing forward to ride ASAP. People have an agenda, and horses have their own agenda, which is about survival, safety and getting back to the herd. If we don’t teach him how to be OK with us, he will default to his instinctual agenda, which is about survival. He will act herd-bound, overly sensitive, and flighty, which are all instincts the horse has naturally. If I keep showing him what I want, patiently and persistently and on his timeline, then he will ‘get it.’ That’s why you don’t want to skip steps.”

The foundation must progress in stages, and includes several basic lessons. Here’s a quick look at each.

This stage helps the horse learn he must trust you and see you as an ally. But, there is an important balance between being friendly with the horse and gaining his respect. Without respect, the horse will think he can push you around or disregard you and not pay attention. When you gain his respect, you can get him to move and respond to your aids. 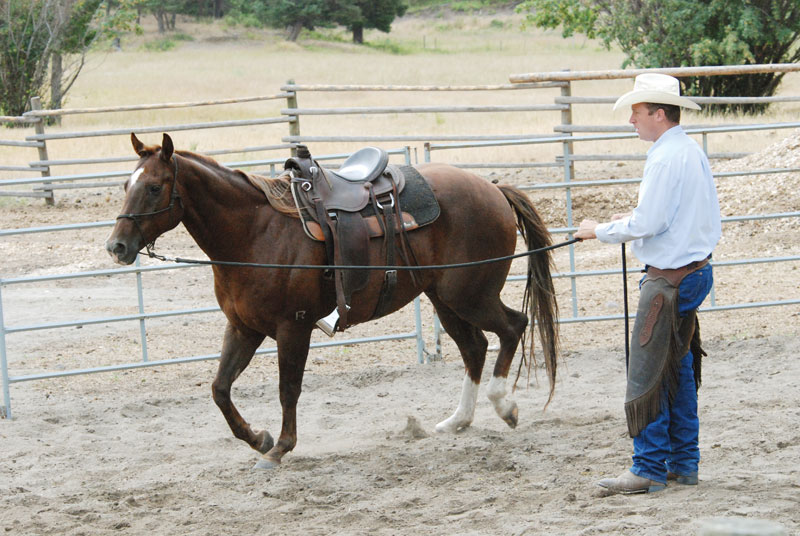 Stage 2: Teaching the Horse to Think

This stage is about engaging the horse’s thought process through very simple ground exercises.

You’ve just started riding him and you’re still in the corral (or other contained space), so you aren’t going to ask him for anything complicated. You may ask him to back through a doorway or over a rail on the ground. Or you ask him to stand on a platform, lower his head, bend to the left and right. All of these are basic things the horse can understand. His response allows you to see how he takes in information so you can tailor his training accordingly.

For example, some horses may need lots of physical activity, like trotting out, while others might need more time on little things, like coordinating their feet.

Stage 3: Get Out in the Open

Use this stage to expose the horse to as many different environments as possible. As soon as you can safely ride in the arena, get the horse out of it, even if the first few times you’re leading him. The whole idea in this stage of training is to develop forwardness and purity of the gaits. You do this primarily by putting miles on him going down the trail or just riding out in the open, away from the confines of an arena or corral. Much of this can be done at a trot.

Build on your existing foundation to introduce and gradually fine-tune the individual body control maneuvers your horse will need in the future. Whether he’s going to be used for western or English disciplines, he needs to be agile about moving his shoulders, ribs and hindquarters around, so focus on lateral movements, as well as control of the forehand and hindquarters. The idea is to keep him mentally keen; don’t drill on one specific move or body part. Ask the horse to move his body in many ways while doing different tasks.

“I go through these four stages over the course of about six months,” says Field. “Some horses take things in really quickly and others need more time.

“Only after the horse has mastered all four stages and is working well at a walk, trot and canter in many different environments will I start focusing on adding elements, like riding with contact for the English horse, or the quicker footwork required for many of the western disciplines,” he notes.

A common mistake many people make when starting a young horse is being too quiet and “sneaking” around him.

“I’d rather get the spook out of him and have him realize it’s OK,” says Field. “You don’t have to be boisterous and dramatic; just be natural. Make big movements. Don’t do everything softly and quietly. Go up and down many times when dismounting. Throw the saddle blanket on and off many times until he’s fine and accepting.”

Be very aware of your attitude and approach. “When you get frustrated with your horse—or worse, angry—this changes how you hold your reins or sit in the saddle; everything about your approach,” says Field. “The horse will read your intentions. Without question, he will feel your attitude when you’re on his back or standing near him, and he will have an equal and opposite response to that attitude.” 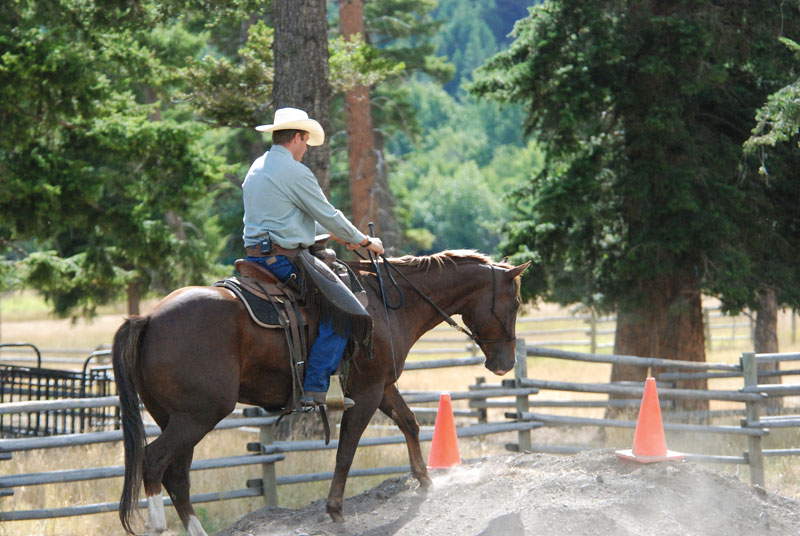 A horse with a strong foundation is comfortable in many environments, and he allows you to move and direct him where you want him to go. His view of people and learning is positive.

Never forget that the responsibility at this stage is on you, not the horse. You must be the leader he needs.

You should expect to spend more time if you are working with a horse that was already “trained” but exhibits problems.

“Some older horses have so many holes in their foundation that they need to be brought back and essentially restarted,” says Field. “This means going back to building blocks and not worrying about discipline-specific exercises, but rather doing what it takes to overcome whatever issues you’re dealing with, like bucking, bolting, or herd-bound behavior.

Jonathan Field named his horsemanship program Inspired by Horses™ because it was inspired with horses in mind at every step. The bulk of Field’s teaching is helping humans think the way horses think, with the goal of building a strong relationship.

He and his wife Angie and their sons Weston and Mason live in British Columbia, Canada. Field’s horsemanship centers are located in Abbotsford and Merritt, just east of Vancouver. www.jonathanfield.net 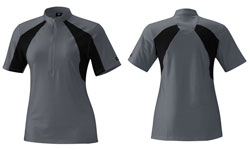