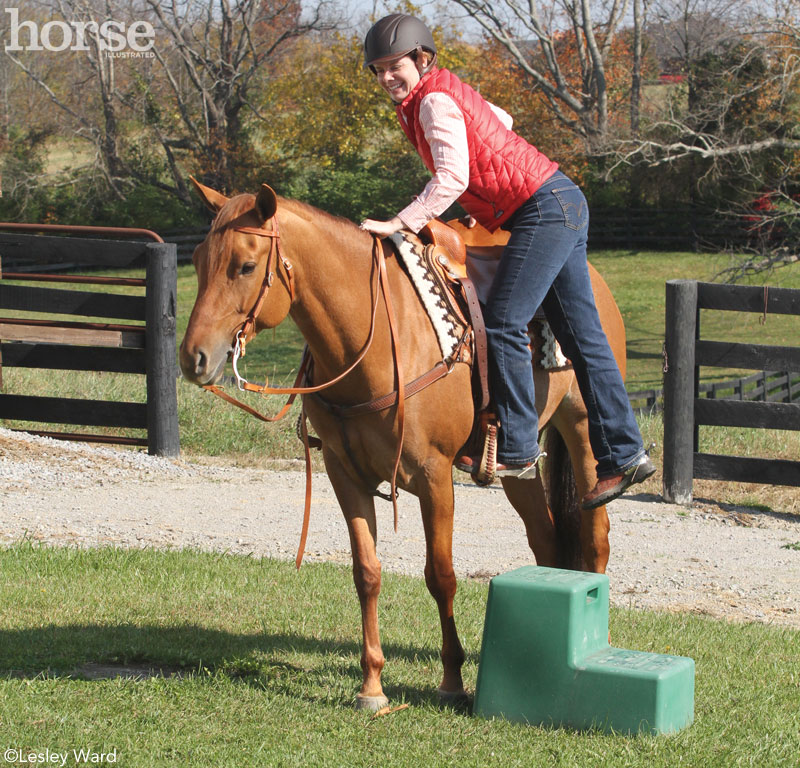 Q: I’ve heard that it’s better for my horse if I use a mounting block, but he moves away before I can get my foot in the stirrup. How can I teach him to stand still?

A: A horse that won’t stand still at the mounting block is either fearful or has figured out that he can sneak away. To fix this, outfit your horse in a halter and lead (you’re not getting on yet, so you don’t need a saddle).

Approach the mounting block with your horse behind you. Touch and slap the block with your hand to show him it’s not a threat. Then encourage him to investigate it—touching it with his nose, grabbing with his teeth, or pawing at it are signs he’s confident and ready to see the block alongside him. Tell him “whoa” and place the block next to his belly. If he becomes anxious with it there, then set it down next to his shoulder until he shows more confidence.

Ask him to stand quietly on a slack lead while the block is at his side. If he steps forward, move him back into place. If he swings his hips away, push his forehand away (turn on the hindquarters) for several steps. Then back him several more steps before bringing him back to the block. If he turns to look at the block (a symptom of worry), straighten his head. The length of time he stands still is based on his comfort level. Move him away from the block before he gets antsy. Expecting him to stand longer than he can handle will increase his anxiety and desire to wander.

Once he’s comfortably standing next to the block, step up and down the first riser. Do this quickly so he doesn’t have time to fret about your surprising ability to levitate. If he does move, calmly reposition him, say “whoa,” and try again. If you are reforming a shameless mounting block avoider, firmly back him straight for several steps until he responds willingly to soft pressure and lowers his head. Always correct your horse from the ground. Otherwise, you’ll end up pulling his head toward you, causing him to swing the rest of his body away. This can cause or reinforce evasiveness.

Repeat these techniques as you work your way up to the highest step while increasing the time you spend on the block. At the same time, praise your horse by rubbing his neck, back, and hindquarters. These rewards will also help him acclimate to movement and touch from above.

Now go through the process with your horse saddled. Continue to work with him in the halter or switch to the bridle. If you move him back with the reins, use even pressure and press your fingertips against his chest. Most horses are relatively solid about standing still at this point, but wise ones will know that the saddle means work is ahead and get wiggly. Gently rock the saddle by the horn and put your foot in the stirrup to see if your horse unsettles. If he moves, get down, reposition him, and repeat until he stands still. Eventually he will realize that all roads lead back to the block.

DALE RUDIN is a CHA-certified riding instructor and clinician with a mindful and balanced approach to horsemanship and riding.
www.un-naturalhorsemanship.com