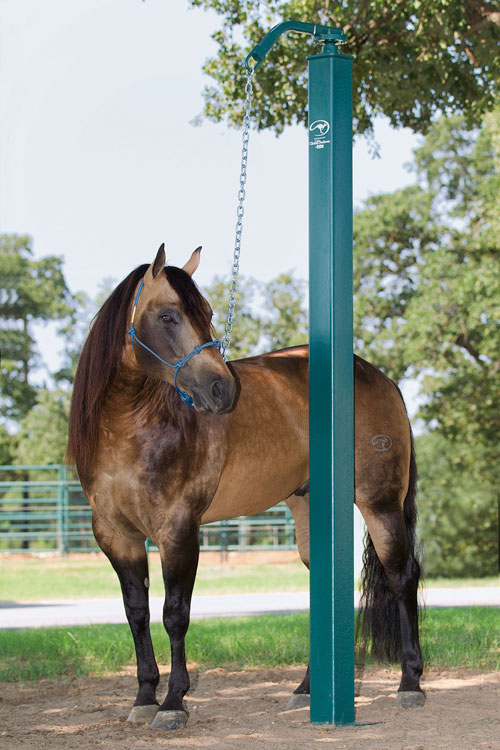 Q: My mare constantly paws at the ground as soon as I walk away from her. I have tried leaving her tied until she stops, but it never works. What can I do to stop her?

A: Pawing the ground is a clear sign of impatience and frustration on the horse’s part. Initially, horses paw because they want or need something: they don’t want to stand tied, or they want their grain faster. However, once a horse has been allowed to paw over a long period of time, it often becomes an ingrained habit that no longer has any specific cause.

The best way to teach a horse to tie well is through practice. You need to keep your horse tied up until she no longer paws. Believe me, she can’t paw forever, but she’ll do a good job of making you think she can. I tie my horses for at least four hours a day, every day. Many times, they stay tied all day long. It doesn’t matter if they’re good, bad or indifferent; they all get tied up.

Oftentimes, a horse that paws when tied up does so because he knows he’s going to get attention. What usually happens is that when the horse paws, someone comes out to stop him, or even untie him. He begins to think that he’s controlling their actions and getting what he wants by pawing. Think of your horse like a little kid throwing a fit for attention. Every time she’s rewarded for her behavior, the problem just gets worse. That’s why it’s best to just ignore her when she paws and teach her to stand tied with patience.

Tying a horse up for long periods of time accomplishes many important things in your training. I have a little saying: “End each training session by tying your horse up to the tree or post of knowledge.” When you tie your horse up after a training session, it teaches her respect and patience while giving her a chance to think about and absorb what you have just taught her.

The very last thing you want to do after a training session is get off your horse, take her back to the barn, unsaddle her, hose her off, and put her in her stall to eat. This puts your horse’s focus more on getting back to the barn and eating than on thinking about her job. If you get into the habit of tying your horse up for two to three hours after you ride, she won’t be in such a hurry to get back to the barn.

If you want your horse to tie well, you have to practice and teach her patience. If you practice it every day, it just becomes a natural part of your horse’s routine.

Clinician CLINTON ANDERSON owns and operates Downunder Horsemanship in Stephenville, Texas, where his method of horsemanship has helped to transform the relationships between thousands of horses and riders. He also hosts two training programs that air weekly on Fox Sports Net and RFD-TV. www.downunderhorsemanship.com