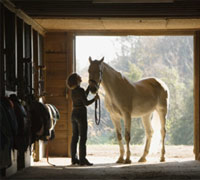 If you’ve been riding for awhile, chances are great that you’ve found yourself traveling down the wrong training path at some point in time. Perhaps you incorporated a training technique into your routine that resulted in horse behavior that wasn’t quite what you had in mind. Or maybe a few overzealous reprimands on your part resulted in some unforeseen, undesirable modes of misbehavior in your horse that you’d like to eliminate. If we hope to remedy the problems caused by our training misadventures, we need to learn the answers to a few key questions first: How lasting are the effects of our training mistakes on our horses? Can the damage ever truly be repaired?

I recently heard a profound statement that I think says it all: When treated unfairly, the horse will never forget the trespass, but it is within his capacity to forgive it. An Arabian gelding I once owned and started under saddle had a small problem with trailer loading; he’d simply plant his feet and refuse to get in for a long time. Sadly, since I seldom needed to haul him anywhere, I neglected this weakness in his training. He was eventually sold to an endurance rider, and the trouble started showing up during loading and hauling to and from their competitive meets. Some strong measures were employed to teach him to load, and he immediately developed a bucking problem he hadn’t had before. His owner decided to sell him, but sent him to me to resolve the behavior problems first. After a few months of patient and consistent under-saddle training, he was once again trustworthy to ride.

Two fundamentals of behavioral modification therapy, desensitization and counterconditioning, had been applied to retrain this horse with a successful outcome. Desensitization is the process of making an animal less reactive to a situation by accustoming him to the fearful stimulus. In this case, I habituated the horse to loading into the horse trailer by doing it so often that loading lost the power to upset him. This, coupled with counterconditioning, helped him to develop a positive association with the horse trailer. Counterconditioning is establishing a new response to a stimulus as a replacement for an undesirable behavior. In this case, the horse’s fear of the trailer was eventually replaced by anticipation of the food reward waiting within the manger. The bucking problem was resolved both as a consequence of alleviating the trailer-loading problems and as a result of employing the behavioral principles of positive reinforcement, negative reinforcement and punishment correctly in my under-saddle work. Praise and other reinforcers were delivered in abundance for appropriate behavior, while the potential for a swift correction kept inappropriate behavioral tendencies in check. Eventually, these two undesirable behaviors were dropped from the horse’s repertoire entirely.

The knowledge that consistent, appropriate training can eventually turn most of our mistakes around shouldn’t be taken as license to experiment with different training tactics. The fact is, it’s very difficult to undo a horse’s initial training, regardless of whether those early lessons were correct or incorrect. In a 1994 study, which was presented in the journal Applied Animal Behaviour Science, I taught 17 previously untrained yearlings and 2-year-old horses to discriminate between a black and a white feed bucket for a food reward. Once each horse had figured out which color was correct, I reversed the correct color to see if he could unlearn what he had been taught and replace it with something completely opposite. In other words, if black had always been correct for that horse, once he developed consistency at choosing the black bucket every time, I stopped giving food for choosing black and instead started giving food only for choosing the white bucket. Only about a third of the horses were able to unlearn theoriginal stimulus color and make the switch to the opposite color.

Think of the implications of the fact that most horses tested were not able to reverse their initial training. Therefore, the importance of getting the training right the first time cannot be overemphasized. In fact, in similar studies of other herbivorous species (such as cattle), similar results were obtained, lending support to the theory that first training experiences are of critical importance in the overall trainability of domestic prey species. Of course, in actual horse training the rider improves the potential for retraining by guiding the horse through the learning process, whereas in these studies the horses had to try to figure everything out by themselves.

The results of these studies are supported by the popular advice of many leading trainers. In her book The Problem Horse, Karen Bush suggests that training should follow a steady, logical progression, as attempting to teach more in a session than the horse is mentally capable of learning can lead to resistance and confusion-based behavioral problems, and ultimately to vices and evasions. The rider should achieve dominance through an intelligent approach, rather than through force, which breeds distrust and increases the potential for violent behavior. She further states that horses have excellent and long memories, particularly for unpleasant experiences, and that many behavior problems can be traced back to past events. She emphasizes that horses should be trained through repetition, association and reward, and reminds her readers that it is just as easy for a horse to learn bad behavior as it is to learn good behavior.

Trainers should never consider it too late to repair the damage of a misdirected training attempt. If the training problem has been going on long enough for undesirable habits to be ingrained, it will just take more time and patience to undo the damage. Sometimes the assistance of a professional trainer may be required to help turn around a long-term behavior problem. Many errors, however, if detected by the trainer and reevaluated before unwanted responses become habitual, can be resolved with somewhat less effort. For example, one of my horses is normally willing to cross water on the trails. When we moved to a new barn, my husband and I rode the horses out together to explore the trails in the area. We had been told ahead of time by the barn owners where the best place to cross a 4-foot deep, 20-foot wide creek would be, and as we approached the area, we discovered that the banks descending to the creek were quite steep. Since the horses had many previous experiences with water crossings, I took the mare I was riding immediately into and across the creek. The mare Steve was on balked at the steep bank and deep, murky water below. As Steve grew more insistent, she suddenly jumped from an absolute standstill halfway across the creek, and then scrambled out and up the opposite bank. Steve attempted another three crossings with similar results. I decided to climb on and give the water crossing a try myself, planning to get the mare into the creek and then to steer her upstream until she finally relaxed. When I did attempt to do it, the mare struggled so hard against my efforts to turn her head upstream that the rein broke, I lost my balance and toppled into the creek. I rode on home with tadpoles in my pockets, did some research and devised a new strategy with the intent of keeping her calm and willing throughout. The next time I went back, the mare was lightly tranquilized and I walked into the creek alongside her. This approach restored her confidence, and after several entries into and out of the water, I climbed onto her back in the creek.

The next time we went back (this time without any sedatives on board), I once again led the mare into the creek and then climbed back on and rode her into and out of the creek. The next lesson was approached entirely from the horse’s back, and when this went well I knew we had repaired the damage.

Why did the new technique work when the first one did not? The new approach resulted in success because we recognized the initial training problem early (and rather dramatically), before bad habits were set in stone, and thought out an alternate approach that alleviated our horse’s anxiety and cultivated her trust. It pays to step back and reassess training situations where the horse’s behavior indicates that something in your approach just isn’t working. It’s never too late to try to rectify your training mistakes—some just take longer to resolve than others.