Regardless of age or background, I begin all horses’ training in the round pen. As far as I’m concerned, the round pen is the safest area for you and your horse to initially build a relationship because you’re not connected to each other. Anytime you’re connected to a horse by a lead rope, you have to be relatively close to him. If he tried to do something disrespectful like kicking, biting or running over you, the chances of you getting hurt would be much higher. When you’re working with an unhandled older horse, this is an especially important safety factor to consider.

After a few sessions in the round pen, your horse will have a higher level of respect for you. When you do put the halter and lead rope on him, he’ll be in a better frame of mind to pay attention and learn. 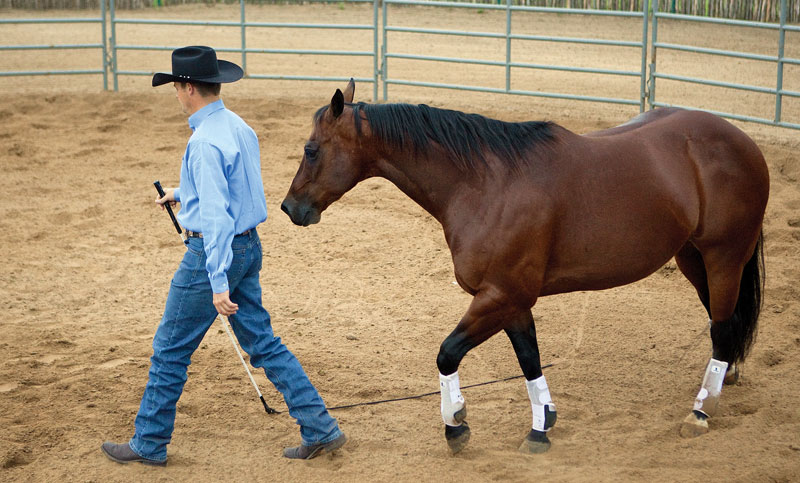 By working with your horse in the round pen, you’ll find out how athletic he is, how lazy or energetic he is, and how willing he is to move forward and follow your suggestions. These are all important factors to take into consideration as his training progresses.

Five Steps to Forming a Foundation

When round-penning a horse, your ultimate goal should be to teach him to move forward, backward, left and right in the direction you point. You also want him to “catch” you, rather than you having to catch him, by teaching him that the center of the round pen—being with you—is the most comfortable place to be. You’ll accomplish that goal by working on the five steps described here.

Rescues in the Round Pen

Don’t treat a rescued horse differently in the round pen. Making excuses and special allowances for an abused horse’s bad behavior will only limit him, while treating him the same as any other horse will actually accelerate his progress. All horses are looking for a leader to keep them safe; however, while horses are natural followers, they only want to follow a leader they respect and trust. Every day your horse will test you to see if you deserve to lead him, which means that you have to be worthy of your leadership role. You have to prove to him that you can move his feet forward, backward, left and right and are always willing to reward the slightest try. Although abuse is a terrible thing, once a horse is brought back to health, treating him just the same as you would treat any other horse breaks the cycle of abuse-related behavior and sets you on the track to enjoying a great partnership. It’s absolutely amazing to see how quickly a rescue horse will start to trust and respect you if you treat him like any other horse.

Clinician Clinton Anderson owns and operates Downunder Horsemanship in Stephenville, Texas, where his method of horsemanship has helped to transform the relationships between thousands of horses and riders. He also hosts two training programs that air weekly on Fox Sports Net and RFD-TV. www.downunderhorsemanship.com.