Lloyds Bank, a British establishment, is celebrating its 250th anniversary. In honor of the momentous occasion, they created a television commercial depicting the last 250 years. Instead of showcasing life in a bank over that period, Lloyds chose instead to feature the iconic black horse, which is also the bank’s logo, as a symbol of a reliable, trusted presence. I don’t think they could have chosen a better image to represent them; do you?

Check out the commercial and let us know what you think.

Video: How to Evaluate Hay Quality 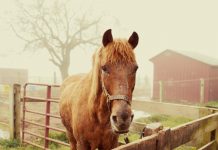 Featured Video: The Equestrians of Compton