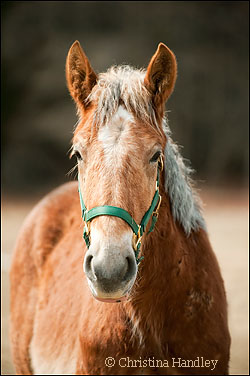 I would like to introduce you to Shamrock, he is the newest member of my horsey family. Shamrock was given to me by my same great friends, Randy and Nancy Robertson who gave me Harry back in late November. The great part about Harry and Shamrock is that they are the same age, only two weeks apart and they grew up together. When Shamrock got off the trailer, Harry was right there to greet him and they immediately started rough housing and playing. My two older girls, Kelly and Rachel stood by and watched. I could hear them thinking, thank goodness, now Harry has someone his own age to pester, lol. They accepted Shamrock just like they accepted Harry, with no drama at all. They all quickly taught Shamrock where the water bowl was, where their barn was and where all the other great hangout spots were. You gotta love Belgian horses; they are so sweet and gentle. 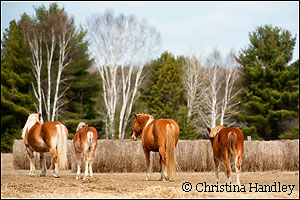 So now I have yet another cutie to take pictures of and I would love to share some of the first ones with all of you. It’s been so long since I’ve had a young horse around here, let alone two of them. All the rest of my horses have been born right here on the farm and the youngest is 15 (Kelly). So having two young boys around is quite a change, they go from hard playing to flat out sleeping in the sunshine. I caught Shamrock napping the other day so I worked on getting some cute shots of him. My first shots were what I like to call my “insurance” shots. This is where I take my first bunch of shots without too much thought or preparation or getting too close in case he stands up and leaves. Of course, those shots are usually snap shot type photos but they are great for the photo album and I always take them. Then if my subject who is Shamrock in this case, stays lying down, I get more serious about my photos. I start planning and looking for the best angles that will give me the cleanest backgrounds. I move around slowly while changing my camera settings so I can focus on him and make my background nice and soft to make him pop out of the frame. I do this by shooting on Aperture Priority with a wide aperture of around f/2.8 to f/5.6 coupled with a long focal length. I use my Nikon 70-200mm f/2.8 lens all the time mostly at the long end which is 200mm. Another thing that really adds impact to these photos is I got down on the ground, on his level instead of shooting down on him and this meant lying on my belly in the dirt. 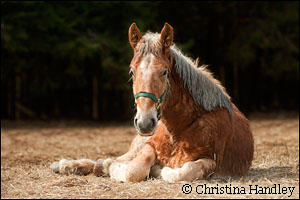 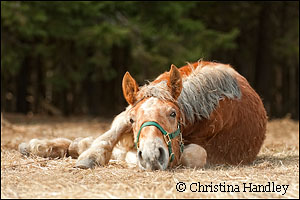 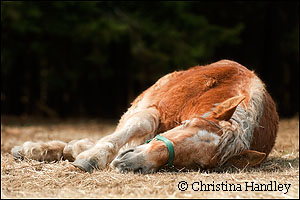 Here is Shamrock meeting one of our cows for the first time over the gate. The cow was trying to stick her nose through the gate and lick Shamrock but she finally convinced Shamrock to put his head over the gate when she sniffed him and then promptly butted him in the nose trying to play with him. It was hilarious! 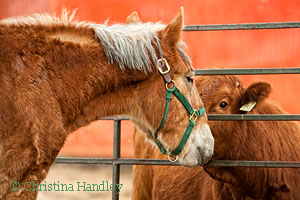 Harry and Shamrock bellied up to their round bale of hay, they both have very good appetites. 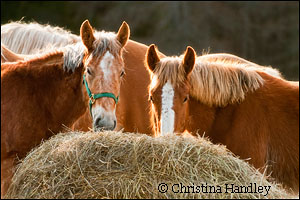 Shamrock peeking at me over Harry’s back. I am always on the lookout for cute candid photos while I am hanging out with the horses. There isn’t anything better than “pasture sitting” with your animals, it is the best stress therapy there is 🙂 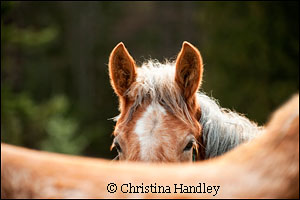 Back to Horses in Focus