Here are some ways that anyone can learn horse behavior by developing their own horse sense and how their horse’s behavior can be caused by humans.

An upbeat, warm-hearted man—I’ll call him Dave—had trailered a horse to my clinic. His Mustang, who I’ll call Timmy, found it hard to settle down. I watched Dave’s cheery face as he chuckled uncomfortably, shaking his head and mumbling, “There goes my Timmy. He just does that!” He explained that if he didn’t “get Timmy’s bucks out,” the horse was often nippy and too uptight to ride. He wouldn’t even bother to ride Timmy some days because it seemed like he would never settle down; he was baffled that Timmy was still, after so many years, acting out in this way. 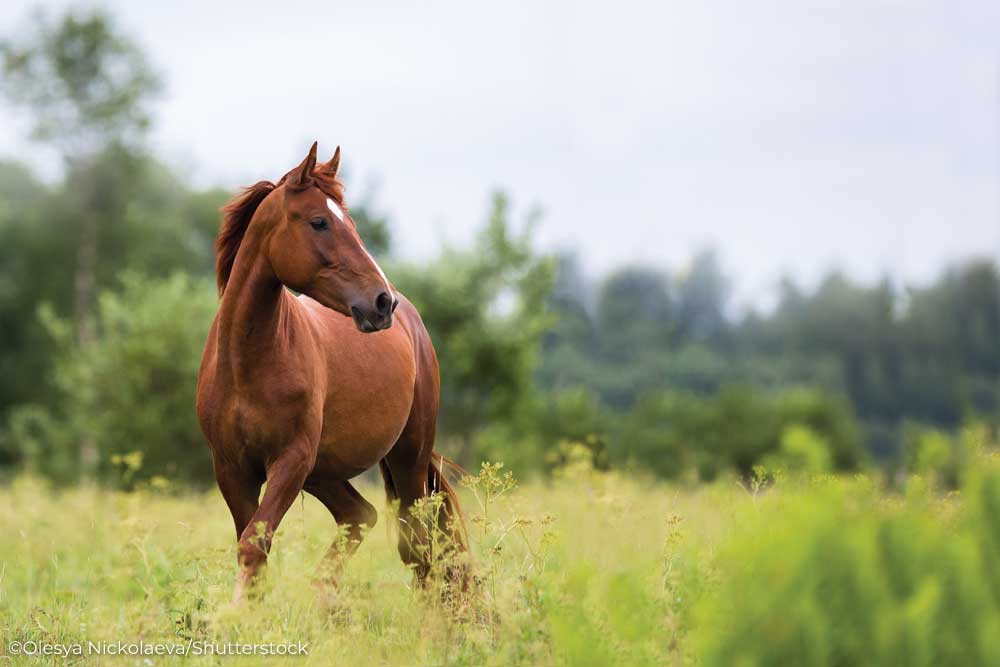 On the surface, this situation would seem to most people to be the case of an unruly horse that was “just that way.” Dave obviously adored his horse, and the trainer they went to was well known for his thoughtful approach to horsemanship. No one was beating the Mustang or rushing him or trying to scare him into submission. It sounded like even the mare that lived with him back home was very patient and kind. I needed to see if I could diagnose what Timmy’s issues really were.

The first way to know how a horse’s behavior is caused by human is learning the X’s and O’s. By adopting an “O” posture—rounded shoulders and arms, hands lightly touching, head and neck relaxed, and softened jaw and lips—your brain and nervous system get the signal, “All’s clear, you’re safe.” This posture urges your inner state in the direction of what I call Zero—the state of being present in the moment, being aware and calm—causing you to breathe deeply. It is universally recognized as welcoming, beckoning, and softening.

The opposite of this is the “X” posture: high, tense shoulders, tight lips, hard eyes, breath held, tense legs. All of this signals the brain to be on alert and hyper-vigilant—away from a state of Zero. This posture sends adrenaline throughout our bodies and prepares us to fight, flee, or freeze.

Horses do, at times, require an “X” posture. In an “X,” our arms and legs move out firmly and our intensity becomes higher. We make an “X” to create motivation to move, to block against movement, or to simply signal intention.

The second way to know how a horse’s behavior is caused by human is learning the many levels of intensity. Many people find it difficult to modulate their own intensity, and what should simply be assertive often becomes aggressive. In an effort to help make this clear, I usually teach people to think of levels of intensity in five layers:

The third way to know how a horse’s behavior is caused by human is learning how to become assertive. The mistake people most often make is that we can perpetuate a horse’s fear by reacting with aggression rather than assertiveness. I have specific exercises to help students learn the difference, because in our culture, the two are often confused. (In the horse world, assertive can be at a high intensity, but as soon as it’s over, it’s over … and everyone takes a nap!)

Most people do not want to live aggressively with their horses, and so in the effort to avoid this complication, they undercut their “X” energy. In other words, a person may be saying “go” or “stop” and making the right noises or motions, yet underneath it all she doesn’t really want the horse to feel offended, or she is afraid to accidentally ruin the connection she feels she has with her horse.

“Boundary” is not a four-letter word. It does not imply punishment, restriction of authenticity, or rigidity. Horses need sane, healthy boundaries, much like the two sides of a river. If the shores of a river are too muddy, the river merges with the land and it all becomes swamp. Horses thrive on clear boundaries amongst themselves. The cohesiveness of their life together depends upon their ability to move their large bodies deftly around each other. In the case of a crisis, this ability means all the horses can run at top speed and not trip each other up.

Healthy horses thrive on tidy assertiveness that does not take much time or energy: Keeping their head lowered, ears sideways, eyes soft, lips and chin relaxed, they are using the horse version of “O” posture and maintaining a Zero inner energy. By having the foundation be Zero, it is easier and easier for smaller and smaller versions of “X” to serve as boundaries. Horses are actually masters at the lowest level “X” messages. Most of us have seen a lead horse that rarely even lifts his head—his eyes alone are his “X.”

Because humans tend to merge their X’s and O’s unconsciously, horses learn to tune us out. Then we find ourselves having to amplify our “X” energy to a ridiculous level to be heard.

This was, unfortunately, Timmy’s problem.

The Two Sides of the River

The final way to know how a horse’s behavior is caused by human is learning the two different sides. After watching Dave catch, halter, and lead Timmy, I could see that he was a cheery, light-hearted guy who loved his horse but became stiff and defensive around him. This was understandable, because the moment Dave began leading the Mustang, Timmy began to attempt to chew on Dave. The horse wasn’t being completely offensive or dangerous in his behavior—instead it came across like a game that went kind of like this:

Timmy then pouted with wrinkled eyes and a tense mouth for about a minute, before sneaking in another attempt to chew on Dave.
What I could see was that while Dave certainly didn’t want his horse nibbling on him, he didn’t entirely mind that his horse wanted to play. His “X” and “O” were blurred.

“Dave, you don’t really like having to constantly tell him to cut it out, do you?” I asked bluntly.

“No,” he admitted. And then, “But I don’t want to hurt his feelings.

I have had this guy since he was a few months old, and sometimes when I put him in his place, it seems like then he won’t even come to me afterward. I want him to trust me. I need him to know that I would never hurt him. My trainer tells me I must get tougher with him—but not angry. Honestly, I don’t see the difference between ‘tough’ and ‘angry.’”

I said to Dave, “Do you think Timmy’s mother would have allowed him to chew on her whenever he wanted?”

Dave’s eyes brightened as he replied, “I got to see him with his mom for a few days at the auction. She was cool as a cucumber with him, and he did not chew on her. Come to think of it, it always made me feel sad that he was taken away from her.”

It was now pretty darn clear to me as to how and why this relationship got so muddy.

I made different levels of “X” postures and gestures toward Dave, and he told me which ones were aggressive and which ones were polite but assertive. I explained that since he was offering to be his horse’s leader, he needed to be the model of behavior he would like the horse to copy. If we are flailing and inconsistent, then that is what we tell the horse to be, too. If we are rigid and inflexible, then that is the message.

Dave needed to solve the riddle of how to stay firm on one hand, but loving and open on the other. His worst fear was that by setting limits, he would lose Timmy’s affection, and possibly betray his trust. However, the consequences of not setting clean, low-intensity boundaries had been to make Timmy feel frantic, overwhelmed, and nippy. Helping Dave find ways to set boundaries using Horse Speak gave him tools to try that were within reason, and safe, for both of them.

Adapted from the book Horses in Translation by Sharon Wilsie and reprinted with permission from Trafalgar Square Books (www.horseandriderbooks.com).