The reins sting your hands as your horse’s head dives like a falling rock for the tall mound of grass. One second ago, you were on a quiet ride through a pretty meadow. Now you’re mad, and pulling hard to get your horse’s head back up.

“That is not OK, and you know it!” you say with more than a tinge of annoyance.

Does your horse do this or any of the following things that annoy you or put you in danger?

If these things happen to you, you’re not alone.

Training All the Time

Are these examples of your horse being disrespectful, and willfully doing things he knows you don’t like?

With some horses, maybe.

But here’s another way to look at it. What if you reframed these events this way: your horse is doing exactly what you’ve asked for—even though you didn’t know you asked for these results.

You may not realize it, but “training” takes place every moment you’re with your horse, not just when you’re in the saddle. You are training your horse each time you lead, feed, groom, load, or stand at the mounting block. You just might not be aware of what you’re teaching him.

Whenever your horse asks a question—may I graze on the trail?—and you don’t respond, you have said “yes.” Unintentional training has begun.

Of course, the challenge is hearing your horse’s question in the split second he asks so you can redirect the outcome before the action has started.

Horses are creatures of subtlety. The flick of an ear, the change of an eye, the position of the head—all of these subtle changes mean something.

Horses are creatures of subtlety. The flick of an ear, the change of an eye, the position of the head—all of these subtle changes mean something.

Before your horse dives for the grass, he may have put his nose down just a bit, or changed his focus to the side of the trail. When you can catch the question right at that moment and answer it, you have a good chance of giving him the answer you prefer. This changes the result and builds a consistent habit: “No grazing on the trail, please.”

In that moment, it seems easier to give in and avoid a complete meltdown in the cereal aisle. But the next time, the child has learned that the outcome might change for the better if they just keep at it.

Horses are much the same way. When the answer to eating grass on the trail is always no, they’ll generally go along with that expectation and keep walking. (Of course, some days the grass is just too yummy and they still ask if they can have a snack.)

Inconsistency is confusing to your horse. One day, you’ll say it’s OK to snatch grass because you’re preoccupied with other thoughts and didn’t catch your horse’s question. The next day, you get angry when he snatches the grass. However, he’s just doing what you told him was acceptable the day before.

The good news about unintentional training is that it’s really more about training yourself than your horse.

It’s about paying attention when you’re with your horse—looking for the questions and answering them quickly and consistently.

This may be a new concept for many riders. To take the first steps, just start with curiosity. At the beginning, start noticing things.

If your horse has a particular behavior you’d like to change, what happens before that behavior? Does the softness of his eye change? Does he raise or lower his head? Flick an ear? Hold his mouth tightly? Flare his nostrils?

The goal is to catch the signs of a question before the idea turns into action.

If an action causes pain, your horse will do what he can to avoid or minimize the pain.

Some common behaviors that can be pain-related include not standing still for mounting; bucking or rearing; raising his head during bridling; pinning his ears during saddling; or not standing well for the farrier.

If your horse has any of these behaviors, explore if he has pain in his back, mouth, feet, or joints as a possible contributor.

When you’re consistent every time you do a certain thing, your horse comes to quickly understand this is what you’re looking for. These are the rules, and horses are generally just fine with following them. However, the rules you’ve set may not be the rules you wanted or intended.

If your horse does a certain thing that you prefer he didn’t, especially for safety reasons, it’s time to change the rules.

Once you make the decision to change, your response and expectation needs to be the same—every day, in every location. And no matter what else is going on.

You need to carefully decide what changes to make, and choose those you can enforce consistently. Once you make the decision to change, your response and expectation needs to be the same—every day, in every location. And no matter what else is going on.

When you look at behaviors as actions you’ve inadvertently trained your horse to do, instead of thinking your horse is being willfully disobedient, it helps you make corrections without anger or frustration.

Still, when you first change the rules, your horse may raise his eyebrows, figuratively speaking. A cartoon question mark might float above his head.

“What?” he asks. “I’m just doing what we’ve always done. I ask if I can graze on the trail, and you always say yes! What’s going on? Why is today different?”

Your horse may act confused or even seem angry. He may try the old behavior again and again. After all, he’s just trying to do what he knows has been right and what you’ve said was OK in the past.

Once again, you present the new expectation: “We don’t graze on the trail, thank you.”

It may take a few tries, along with being super vigilant in noticing the question and responding before the action takes place. For example, if you respond after his head has started diving for the grass, it’s too late.

With awareness, you can shift inadvertent training into intentional training. With consistency, this can become your new way of being.

Like any habit, once it’s installed, it will take less effort to maintain. Instead of putting a lot of energy into correcting unwanted behaviors, you can use that energy to practice new abilities and create a deeper partnership with your horse along the way. 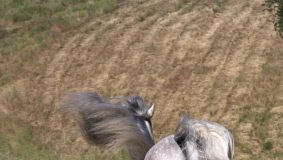