What can you do to bond with your new horse? After horse shopping for months, you found him—the perfectly seasoned horse who checked off all the boxes on your must-have list. You asked all the important questions, visited more than once, had the approval of your vet and trainer, then brought your new partner home. But as soon as he stepped off the trailer, your new horse didn’t seem as calm as at his previous home. Even after a few days, you didn’t feel connected. You don’t suspect that he was medicated, but he seems stressed in his new home.

“We cannot imagine how hard it is for some horses when they leave one area and go to live somewhere new,” says trainer and TTouch founder Linda Tellington-Jones. “We don’t realize the emotional lives that horses have. The great thing is that we have discovered tools to shorten the amount of time it takes for a horse to adjust.”

Tellington-Jones created Tellington TTouch Training to help horses and all animals relax and move toward building trust and bonding with your new horse.

For the signature TTouch move, lightly move your horse’s skin (or your own) in a circular motion. Imagine a clock face with the 6 o’clock toward the ground. Place your fingers at 6 o’clock and move the skin clockwise around the circle until you pass 6 again and end at 9 o’clock. Then, slide your fingers to a new place on the skin and circle again. Tellington-Jones recommends doing TTouch circles all along your horse’s body from poll to tail, as well as around the horse’s forelock and ears.

Tellington-Jones says the circles have been shown to cause a calming effect, stimulating the horse’s nervous system. Moving in a new way helps activate unused neural pathways in the brain; the calm and intentional movements and being mindful with your horse also have an effect.

Tellington-Jones’ training incorporates more than Tellington TTouch. The bodywork and Tellington groundwork (called the Playground for Higher Learning) can help new horses and owners learn to trust one another. Tellington-Jones recalls a horse who was depressed after being imported from Europe to a youth riding school.

“He wouldn’t eat,” she says. “It took a long time for him to settle down. What we discovered was that when you bring the horse’s head down and stroke the forelock and the ears, something happens with the trust of the person and the horse. The horse finally started to connect.”

Another client rode at Tellington-Jones’ six-day training. She was an endurance rider and her competition horse needed to be retired. She attended the clinic with a new horse that she didn’t think trusted or liked her.

“You think that if you trade horses, horses would be fine with anybody,” Tellington-Jones says. “But this horse wasn’t. We did the work on the horse’s body during the training. When she got home and turned the horse out to pasture, the rider said the horse came running up to her as she had always dreamed—just like her other horse.”

To bond with your new horse, Tellington-Jones shares the exercises she recommends to owners of a new horse—and to anyone who wants to develop trust with their horse. Instead of moving straight into traditional training, take the time to do exercises that are designed to help you and your horse connect.

“There’s a relationship that develops when the horse trusts and is safe,” Tellington-Jones says. “When you do a combination of the Tellington groundwork that brings them into mental, physical, and emotional balance and the TTouch bodywork that develops trust, you’ll often see a different horse in a surprisingly short time.”

A labyrinth is a winding path that changes direction. They have often been credited for their meditative, peaceful effects on people. They can also be made for horses using ground poles.

“We have found that if you take a horse who is nervous and put him between the poles, the horse comes into a different, focused state,” Tellington-Jones says. “We have done brainwave studies of the horses in the labyrinth and found that when they round the corners, there is a level of focus and an activation of beta brainwaves that are activated for logical thinking in humans.”

How To Do It: Gather six 10-foot poles. Arrange the first three poles into a rectangle with one open side. Then place the other three poles in another open rectangle around one leg of the first set of poles. You’ll leave an opening at the top right and lower left corners of the labyrinth to create an entrance and exit.

With your horse outfitted in a flat halter, lead him while staying level with his nose so he’s not following behind you or ahead of you when you are at the shoulder, as is expected in horsemanship classes. Lead him into the labyrinth and have him turn around the poles. Walk slowly. Repeat the labyrinth two or three times and stop and pause your horse often.

If your horse is fearful, widen the poles so that he doesn’t feel trapped. Over time, you can bring the poles to the ideal 4-foot width.

Gently sliding your hand from the base of the horse’s forelock to the end is relaxing and creates a bond.

How To Do It: With your horse outfitted in his flat halter and lead, ask your horse to lower his head by gently sliding a few inches down the lead rope. When your horse lowers his head, stabilize it with one hand on the halter. With the other, reach for his forelock, and holding it at the base close to his head, slowly and lightly slide from top to bottom of the forelock three or four times. Pay attention to your breathing. Breathing in quietly through your nose and out gently and slowly through pursed lips will often get a deep breath from your horse.

Stroking with the Wand

Tellington-Jones uses a stiff, white 4-foot dressage whip she calls a “wand” to stroke the horse from neck to shoulder, continuing down to the hooves. The calming touch with the stick helps her to extend her arm as she outlines the horse’s body.

“The horses can see the white more easily, and the color helps differentiate it from a whip they may have seen before,” she says.

How To Do It: Hold the lead rope in one hand. Stand facing your horse and off slightly to his side by the shoulder. Gently stroke your horse’s neck, then chest, and down each front leg, and calm him with quiet, calming words.

If your horse moves, allow him to move around you, holding on to the lead. He’ll soon realize that the work is meant to be relaxing. When you talk to your horse as you work, you’ll calm him. Make sure that you’re breathing deeply and in a relaxed state.

“Your horse will pick up on that,” Tellington-Jones says.

Linda Tellington-Jones is the author of 21 books translated into 16 languages. Her newest book, Training & Retraining the Tellington Way, provides in-depth instructions and more exercises to help bond with your horse. www.ttouch.com

This article about how to bond with your new horse appeared in the March 2021 issue of Horse Illustrated magazine. Click here to subscribe! 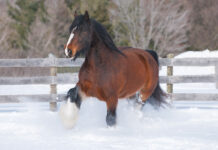 When Is It Time to Retire Your Horse?