Home Riding and Training Western Riding How to Ride the Rollback

The rollback is a distinctive reining maneuver designed to showcase the performance horse’s athletic ability and willingness to be guided. A fast approach, showy sliding stop, snappy 180-degree turn on the haunches and an explosive takeoff are all important elements to a good rollback, but to achieve these moves you’ll need to master your timing and cues. Read on to find out how to ride the reining rollback.

The Ideal Way to Ride the Reining Rollback

To execute a rollback that can earn a + ½ or higher score requires the horse to engage his hindquarters in a move similar to turning back a cow in cattle events.

“I want the horse to get back on his hocks and be able to lift his front end around to turn 180 degrees, picking his shoulders up, moving them around and landing back on his sliding [stop] tracks, loping out of the rollback with force, and at the same time, be relaxed,” says reining trainer Nathan Piper.

Watch the video below on how to ride the reining rollback:

While competing, you’ll do this maneuver one-handed, and no matter the pattern, it all begins with a rundown from one end of the arena to the other.

“I go into the rundown in gears,” says Piper. “When I sit back and move my inside leg forward and ask the horse to speed up, I’m in a different position. If I was in a horsemanship position—straight up and down—the horse is not supposed to go fast. But as soon as I sit deeper in my saddle and sit back, my horse knows to move into the second gear and start running for that stop.”

You’ll ask your horse to build speed from a lope gradually up to a gallop during the run down, and then ask for a sliding stop.

“When I sit down on my pockets and say ‘whoa,’ I want a nice sliding stop,” says Piper. “Whether I pick up my hand slightly to balance the horse or not, at the end of the stop, I’ll push my hand forward and press his neck with my hand to get a ‘fresh mouth.’“

Piper explains a “fresh mouth” as completely releasing any contact you have with the mouth before picking up contact for the rollback.

Once the horse has finished stopping, start your rollback by looking over your shoulder in the direction you’re going to be turning.

“As I look over my shoulder, my pelvis and back twist, just like if someone was calling my name,” says Piper. “This makes my hand move a couple of inches, which is my cue for asking for the rollback. Once I feel my horse’s inside [of the turn] foot pick up in response to that cue, I will follow through with my rein hand, coming across my pocket, and I point that hand 180 degrees from the way we stopped, ideally going right over my slide tracks.”

When your horse has turned 90 degrees of that rollback, you can begin cueing for a lead departure by adding your outside leg and kissing. If you are turning left, you’ll want the horse to lope off on the left lead most times. But look ahead in your pattern. If you’re doing a rollback into a circle, you’ll ask for the lead for the direction you’ll be circling.

Piper says riders often rush their hand cue in an effort to attain a snappy rollback. But he explains this is counterproductive.

“You can’t move your hand too quickly in a rollback, because if you pull on your horse’s head while his feet are flat on the ground, you’re going to pull on his chin and the outside rein is going to pull on the outside part of his mouth,” says Piper. “He’s going to flip his head and you’ll have an ugly rollback.”

It’s better to teach the horse that your slight movement from looking in the direction of the rollback is the cue to start the turn. Don’t follow up with your hand until your horse begins to respond with his feet.

“Always let him have that second to know that it’s coming,” Piper says. “It will actually speed up your rollback.”

Improper timing can also mess up your rollback, says Piper. Make sure to separate the rollback into three parts.

“The first is the asking by looking over my shoulder, moving my hand just a touch,” Piper says. “The minute they initiate the rollback, then you draw them through it [with your reins and outside leg] and then you lope out of the turn. Sometimes people lope out too early, and then you’ll end up with a ‘U’ rollback. That’s why you want to wait until they’re almost past the 90-degree point before you ask for the lope.”

Asking for a lope too late can result in over-turning, which is also a penalty from the judges. Practice the sequence at home until you know exactly when to cue your horse for a precise 180-degree turn and departure.

“The timing of the draw of your reins through the rollback and loping out of the rollback are key elements to getting that rollback to be a plus maneuver,” says Piper.

At home, you can practice on how to ride the reining rollback with two hands. Piper will stop, ask the horse to back a few steps to get him on his hind end, and then ask for a rollback using a slight direct rein on the inside and neck rein on the outside, following up with his outside leg. Other times, he’ll ask the horse for a complete 360-degree turn—or more—before loping back out.

“Once they really load their hocks and understand the neck rein cue from the turn, I can start sending them out of the rollback pretty hard,” says Piper. “At the beginning, I will lope the horse out soft, but when he figures it out, you can ask for more effort. That will make him crack back a little quicker and get a little cattier in the rollback.” 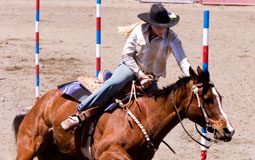