Imagine galloping across an open field on an energetic horse, taking your hands off the reins and guiding him with just a shift of your leg and bodyweight. Next, imagine taking your bow and arrow, and—still at a full gallop—taking aim at a target. Now you have some idea of what it’s like to participate in mounted archery.

Gracie Waymer is a mounted archer based in Texas. She and her horse, Diana, a 5-year-old Egyptian Arabian, train and compete in the sport, and now Gracie is getting ready to compete in the world championships in South Korea!

The Sport of Mounted Archery

Gracie explains that there are two different types of mounted archery that she typically trains in: sports track and field archery.

“The sports track has barriers, so the horse runs in a straight line,” she says. “The focus is on training [for] speed and accuracy.

“Field archery has no barriers and is typically in an open field, so the horse must be guided around the course using bodyweight and leg pressure because your hands are full with a bow and arrow,” Gracie continues. “The focus is on training, good horsemanship, and accuracy.”

Learning From the Ground Up

Gracie practices with her bow and arrow on the ground, too, to improve her accuracy. She started out at an indoor archery range a few years ago, before she’d heard of mounted archery, but she found she had to re-learn some of her skills once she started on horseback.

“I heard about A Company Mounted Archery in my town of New Braunfels, Texas, that taught mounted archery,” she says. “At my first lesson, my coach, Trey Schlichting, had to re-teach me how to shoot because mounted archery is a martial art and requires a martial form of shooting.”

It only took one lesson for Gracie to get addicted to the sport. Now she trains every day and travels across the country for competitions. She says she spends more time at A Company than she does at her own house.

Gracie started in the sport less than two years ago, but she’s been riding horses her whole life.

“My family moved a lot when I was younger, so I was not able to own my own horse until just recently,” she says. “I would often ride friends’ and neighbors’ horses and took lessons at my local barn.” 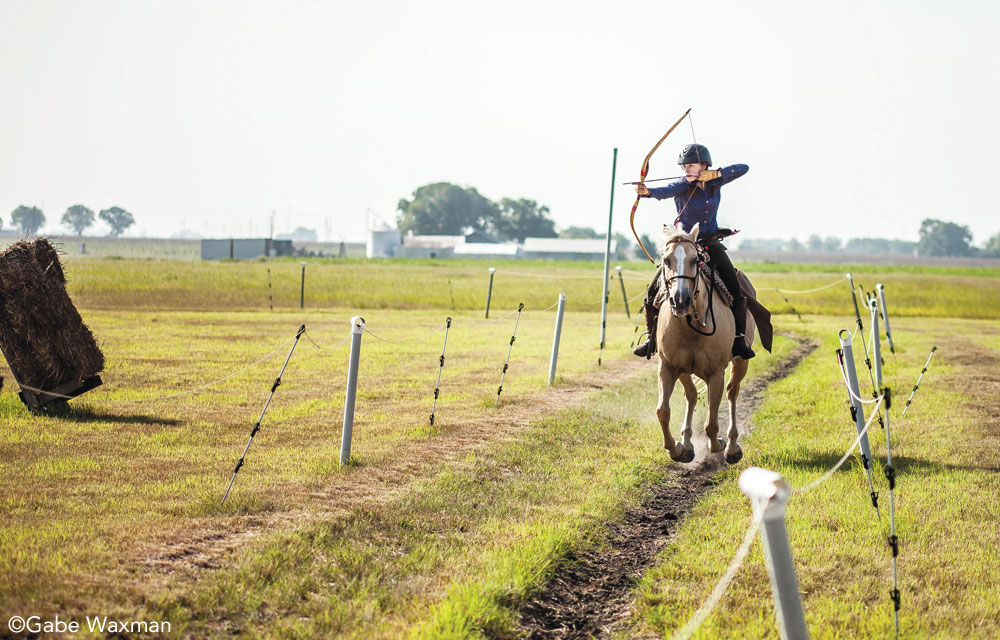 In 2018, Gracie is training and competing with the U.S. Cultural Heritage Team for Mounted Archery, and they’re headed to South Korea for the World Horseback Archery Federation Championships in October. It’s a huge undertaking that Gracie and the team are training hard for, but Diana will be sitting this one out.

“In the culture of mounted archery, we all share our horses with out-of-state or international competitors,” Gracie says, explaining that she’ll ride borrowed horses at the competition.

“To prepare for the championships, I have been doing much more training on the sports track,” she says. “We’ll have six different events, each representing a different form of battle or hunting through history. Each country is to represent its own early history. I will be representing a Native American style of shooting.”

Give It a Try

Gracie says that if the sport of mounted archery interests you, and you have a little bit of riding experience, you should give it a try!

“After years of riding both English and western, I found that mounted archery is one of the most empowering things you can do,” says Gracie. “Dropping the reins to pull back a bow is a level of trust unique to horseback archery.”

There are mounted archery clubs across the United States, along with instructors and clinicians who will travel to different barns to teach up-and-coming horseback archers.

To find out more about mounted archery in your area, visit www.horsearchery.us.