Along the short end of the arena sits an enclosed play area filled with toys, a small trampoline, Tonka tractors and trucks. For any parent who rides horses, it’s a dream space to let kids play while still being supervised. It’s one of the many ways Jackie Crawford makes room in her life to continue roping.

And when Crawford won the inaugural Wrangler National Finals of Breakaway Roping world title in 2020 while six months pregnant with her second child, women rejoiced. Being a female roper is challenging enough, and to compete while pregnant was next-level.

Motherhood aside, Crawford’s roping career has been defined by optimism, hard work and perseverance. It’s how she’s earned 20 world titles in breakaway, team roping and all-around, and at the time of publication, ranked first in breakaway in the Women’s Professional Rodeo Association with more than $520,000 in career earnings.

There’s a reason why Crawford’s social media posts go viral. She’s proof that with sweat equity and determination, you can rise to the top.

A self-proclaimed tomboy, Crawford grew up in Illinois playing basketball and riding in speed events like poles and barrels. She didn’t have an arena, so she either rode in the pasture or hauled her horse to local trainers for lessons and advice.

“Riding and being around horses was our way of life,” says Crawford. “When I was little, my mom, Annette, cut a hole in a piece of Styrofoam and set it over her saddle horn, and that’s where I rode. I was always in tow.

“We trained barrel horses, and my mom would haul me to a bunch of barrel races. She was also an outrider at the racetrack in St. Louis, so I grew up on the track. As I got older, team penning was big in Illinois, and I started to do that. It’s what my mom did, and she’s well known for being a horsewoman up there.”

Crawford didn’t start roping until her family moved to Oklahoma when she was 11 years old.

“When I moved to Oklahoma, they had junior rodeos—a lot more than what they had in Illinois,” she says. “As I started going to those, running barrels and poles, I saw girls roping in a ‘guys’ event,’ and I was like, ‘I want to do that! It looks so cool and fun.’ That’s where I fell in love with the roping.”

At the time, Crawford was riding a “ratty little barrel horse” named Cowgirl.

“She was really gritty and a cute mare,” Crawford recalls. “She was little, so she wasn’t a barn burner in the barrels, but she tried her heart out. When I turned her into a roping horse, I remember riding laps and laps trying to get her to let me swing a rope on her. It took forever. She was scared of it and prancing and champing on the bit. But once she figured out what it was, she was the most phenomenal horse ever. She never took my throw away, ever.”

A Career is Born

Crawford remembers entering her first roping event, despite her horse never being ridden through the barrier.

“By pure accident I caught and actually won,” she says. “After that, my mom said that when rodeo season starts, if I roped the dummy enough and worked at it enough, she would let me enter all the rodeos.”

Natural ability only gets you so far, and Crawford’s mom recognized the importance of a good work ethic. When rodeo season came back around, Crawford’s mom said she didn’t practice enough on roping the dummy and wouldn’t let her enter.

“It made me so mad, and I said I would never let it happen again,” says Crawford. “From then on, I worked so hard. I would rope a bale of hay plumb in two.”

She competed in rodeo her sophomore year of high school, which is when she started tracking the National Finals rodeo and seeing people like JJ Hampton and Lari Dee Guy achieve lofty goals.

In 2000, her junior year of high school, Crawford was the Oklahoma State Breakaway Champion, and she won second place her senior year. She chose to attend Vernon College in Wichita Falls, Texas, for its college rodeo opportunities.

“Once I got to Vernon, I got my butt kicked. I mean, I got it trampled,” says Crawford. “I don’t think I was in the top 10 that year. It was so disappointing. I learned from that year and got better. I learned the different situations and studied. My sophomore year I actually won the region and won the nation for Vernon [in breakaway].”

After earning two associate degrees from Vernon, she transferred to Tarleton State University in Stephenville, Texas. While studying for her business degree, she won three National Intercollegiate Rodeo Association individual titles and two team titles, earning her a place in the college’s hall of fame.

And although Crawford was becoming a well-known name in the roping world, she was uncertain about her future. She loved the horses and the sport, but she was lost as to what her future held.

Crawford went to work for professional roper Lari Dee Guy following college. She trained rope horses for Guy and other pro-rodeo athletes. It was there she met what would become her all-time favorite horse, DS Sassy Shiner, fondly known as “T-Boy.”

T-Boy was a “silly horse” that stood out to Crawford and that she “just had to have.” She finally called him her own after trading out riding and some money for the colt. He would end up carrying Crawford to win her first National Finals Breakaway Roping (NFBR) championship and her 20th world title in 2020.

Crawford eventually struck out on her own to train rope horses. She started hosting roping clinics and gaining a strong following.

In 2012, Jackie Crawford started dating a longtime acquaintance and professional team roper Charly Crawford. Their first date was at the National Finals Rodeo in Las Vegas, Nev., and they were married a year later. Now, they live in Stephenville with their son Creed, 4, and Charly’s daughter Kaydence, 16. The family welcomed their baby girl, Journey, in March 2021.

Rodeo life functions differently with kids, but it’s not to say it can’t be done. Juggling the responsibilities of kids, horses and a business is nonstop.

“There’s no balancing it—it’s pure chaos,” says Crawford. “You can’t have a schedule, you just roll with it. You better be someone who can laugh in the chaos of it, because if you can’t, it ain’t for you.”

As she’s done before, Crawford not only rises but thrives given the challenge.

“There are some days when I’ve been tired and the weather is bad and it crosses my mind to skip a day of riding,” she says. “And Charly will say, ‘Oh it’s fine, but I bet so-and-so is out there getting better.’ And I’m like, ‘Oh, hell no.’ I’m so competitive.

The Goal That Stands Out

Giving it her all has landed Crawford countless silver buckles for breakaway roping, team roping, and all-around titles. The one that stands out to her most is her most recent victory at the NFBR.

“There’s so much packed into that one little buckle; so much emotion,” says Jackie Crawford. “It’s years and years of work. That buckle represents dreams. It represents hard work. It represents perseverance. It represents going against the grain and doing what you love. It was surreal. Now my biggest goal for the breakaway is for [that event] to be in the NFR in the Thomas & Mack Center. And I’d love to be there.”

Still, she stresses that she’s not in the business to win, and no one involved with horses or roping should have it as their sole goal. 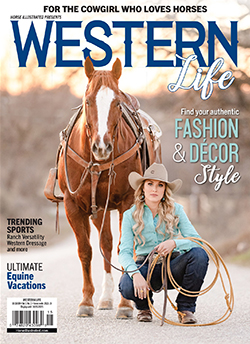 “Any time you’re fulfilling your passion, you’re not losing,” she says. “Here’s the thing I’ve learned: You can’t just enjoy the end product or reward. That’s not what this business is about. You can’t just find happiness in the end result. If you don’t enjoy putting the puzzle together and working the horse, then you’re in the wrong business. I see a lot of people who don’t have the skill, but their will is a lot stronger. It’s not all about natural ability.”

The Making of a Cow Horse