This Thursday in April is always a special day for the horse industry…it’s normally the beginning of the Land Rover Kentucky Three-Day Event. However, this year is different since the event had to be cancelled due to COVID-19. However, with the disappointment is the understanding that everyone’s safety comes first. Our competitors will be back in the ring and on the cross-country course soon enough for us to cheer them on. The Horse Illustrated/Young Rider team would have been covering this iconic event, just as we have done for many years. This year, we’ve made some fun alternate plans, and we’d like to announce a weekend of celebrating the history behind this exciting event with special Facebook posts and posts here on HorseIllustrated.com that will feature some of our favorite riders and horses over the years. So stay tuned for more! But right now, we’re kicking it off with this look at why the Land Rover Kentucky Three-Day Event is such a special competition.

The Land Rover Kentucky Three-Day Event is actually a four-day event due to the number of world-class competitors. The first two days, Thursday and Friday, involve the dressage phase. This video showcases Boyd Martin and Shamwari 4 during the 2016 event during their dressage phase.

Boyd Martin has represented the U.S. at two Olympic Games, three FEI World Equestrian Games and two Pan-American Games. Since leaving his native Australia in 2007, he has consistently been in the top 10 world rankings and has been on every U.S. championship team since changing his citizenship in 2010. He is a fan favorite every year at the Kentucky Three-Day Event.

Shamwari 4 is a 2003 dark bay Hanoverian gelding. Boyd Martin and Shammie were the top-placed U.S. horse-and-rider combination in eventing at the 2014 FEI World Equestrian Games. Shamwari is one of the few horses named to the USEF High Performance “World Class” list. 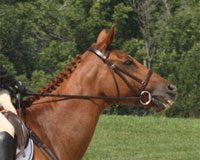