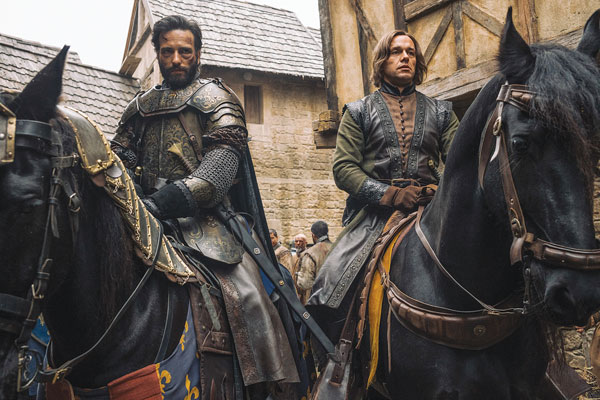 Galloping horses, their riders bound with mail and armor, pour onto the battlefield. As swords clank together and warriors shout, hooves pound the dirt, and horses squeal in fear.

This scene is one of many where horses play a big part in the History Channel’s epic Medieval epic series Knightfall, starring Mark Hamill of Star Wars fame. Based on the legends of the Knights Templar, the order of warriors created early in the 12th century by the Catholic Church to protect Christian pilgrims headed to the Holy Land, Knightfall has all the ingredients needed for a successful historical drama series: violence, deceit, intrigue, romance, and—of course—horses. 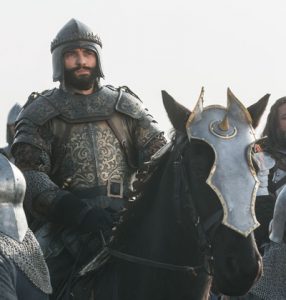 The Knightfall horses features a variety of breeds, but Friesians stand out dramatically. Most often seen as mounts of the Knights Templar, the Friesians in the production likely resemble the horses ridden by knights during Medieval times. Just as with the Friesians in Knightfall, these heavier warhorses were strong enough to carry their own metal protection (in the form of head and neck armor) in addition to the weight of their armored rider.

The Noises of Knightfall Horses

Aside from the expert riding and historically accurate turnout of the Crusader horses in Knightfall, sound effects are crucial in helping viewers feel like they have been transported back in time to Medieval Europe.

Dan Gamache of King Soundworks is the supervising sound designer on Knightfall, and a big part of his job is providing realistic sounds to go with the dynamic action scenes featuring the Knightfall’s horses. Although it may sound like the whinnies and hoof beats heard during the show are happening at the time the scene was shot, these are actually added later, according to Gamache.

“Most of the horse sounds recorded during production are not featured in the final mix,” he says. “The production recordist’s primary focus is the actors’ dialog, so the horse hooves tend to be off-mic, echoey, or lacking good sonic definition. There are also occasions where multiple horses are in a scene and it can be unclear as to which horse is doing what.”

Sound effects are later added for the different noises a horse might make, from the clatter of hooves to whinnies and breaths, bridle and saddle movement, or the swish of a tail on a close-up.

Capturing the horse sounds to be added later can be a challenge, according to Gamache.

“Recording any animal is a challenge, and horses are no exception,” he says. “It can be difficult to get a horse to vocalize when and how a recordist wants. A lot of times whinnies, neighs, blows, and snorts are captured by luck.” 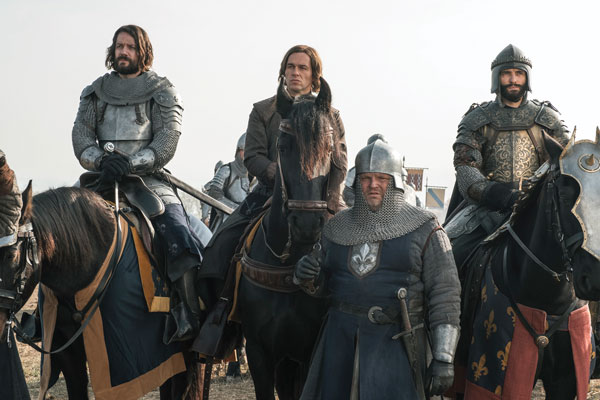 Gamache sometimes visits a small ranch in Massachusetts where his sister works as a hippotherapist and tries to capture horse sounds here.

“Whenever I visit, I end up spending some time at the barn, helping her feed and care for the horses,” he says. “I bring along a small recorder, just in case. Most times I walk away with some good carrot chomping recordings, but not much else. One day, a couple of the horses were extremely vocal. I hurriedly pulled out my recorder to take advantage, but as you’d expect, they promptly stopped. That’s when Amigo, their miniature-donkey, let out a very long and expressive bray. I was lucky on that visit.”

Capturing sounds like galloping requires more precise work. Microphones are attached to a horse’s saddle, bridle, or body, or worn by the rider to capture the horse performing necessary maneuvers like walking, trotting and galloping. “A rider will perform those same moves riding toward, away from, and past a recordist aiming a microphone,” says Gamache. “These recordings are done on a variety of surfaces such as grass, dirt, cobblestone and water.” 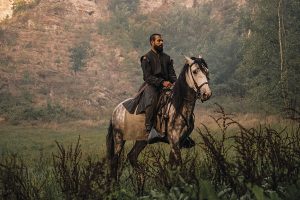 Experienced horse people sometimes wonder why so many horse sounds appear in the background of television shows and fi lms, when in reality horses don’t usually talk so much. Gamache explains that adding horse vocalizations, along with pounding hoof beats, can do a lot to create mood and help tell a story.

“Our No. 1 priority in sound design is storytelling,” he says. “Whenever we add or take away an element, it should be propelling the story forward. How loud or heavy the hooves sound can convey a sense of urgency or power.

Playing them quietly and allowing music to take over a moment can make it more dramatic or ethereal.”

Likewise, different vocalizations can tell the audience that a horse is out of breath after a long sprint or spooked by something in the forest without having to show it on camera.

Recording any animal is a challenge, and horses are no exception. It can be difficult to get a horse to vocalize when and how a recordist wants. A lot of times whinnies, neighs, blows, and snorts are captured by luck.

“You can add a lot to the emotion of what is happening on screen with the horse vocalizations,” Gamache says. “For instance, imagine a battle with knights fighting each other with swords and spears. You would have the sounds of swords clanging and men yelling, but now add the sounds of horses vocalizing in distress and panic, and the sounds of aggressive snorts. This makes the sound of the battle much more intense and adds extreme tension.”

Gamache points out that it’s natural for viewers to react to the sounds of distress of another human or animal.

“It strikes us emotionally when we hear them,” he says. “Conversely, you can have the reverse effect by playing relaxed and soothing horse vocalizations and breathing in a touching scene between a girl and her horse.” 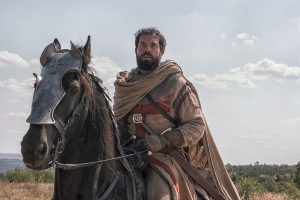 While many viewers believe that a production’s musical soundtrack is what creates a desired mood in a scene, Gamache points out that sound effects can be much more effective.

“As living beings, we react to a situation based on the sounds we hear from other people and living things,” he says. “We can accentuate the emotion the filmmaker is trying to convey with our horse sounds, often more effectively than music can.”

This article on Knightfall horses originally appeared in the August 2019 issue of Horse Illustrated magazine. Click here to subscribe!