Home Equestrian Lifestyle Will You be my Friend?

I’ve learned a lot from my horses. They’ve taught me the value of a good sense of humor. When things go wrong around the barn, I can’t help but laugh at my own follies. I’ve also learned to be patient and kind. Long ago I realized that you can’t make much progress with a young horse if you get frustrated and lose your cool. But most recently I’ve gained some insight on friendship and cooperation from an unlikely couple: Wally and Cowboy.

We all know that horses enjoy being part of a herd, and they go to great lengths to figure out just where they fit within the hierarchy. Whenever a couple of unfamiliar horses meet, you can almost hear one saying to the other, “Look, let’s just get this over with and decide who among us is going to be the boss, and then we can go eat lunch.”

For the time being, Wally is still residing at my parents’ place a few blocks away. And while he seems to have settled in—thus far he’s been perfectly sound and comfortable on the soft footing over there—he and my sister’s Thoroughbred, Topper, are having a cantankerous relationship. Jill and I have ridden our geldings together without incident. But until now we never asked them to live harmoniously on the same plot of land. Unfortunately, flamboyant Topper never avoids an opportunity to annoy Wally. Yet Cowboy, my mother’s palomino yearling colt, gets along famously with Wally. I have to believe that’s because Cowboy acquiesces to every one of Wally’s overtures. In fact, whenever Wally so much as looks in his direction, Cowboy displays the behavior known as “snapping”: He repeatedly opens and closes his mouth, as if he’s biting the air. It’s the instinctive way a young horse demonstrates submission to an older horse. 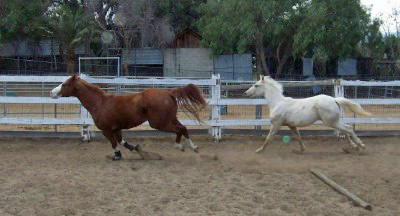 So the other day, in an effort to foster goodwill and brotherhood, I turned Wally and Cowboy out together. And what fun they had! Because Cowboy accepted Wally as his leader, there wasn’t any animosity between them. Instead, Wally led the way and the two of them galloped around my parents’ arena, their tails aloft and their nostrils flared. Cowboy was like Wally’s shadow. Wherever my big red Paint went, the yellow colt followed a few strides behind. Once they’d finished cavorting, the two of them hung out along the fence line with the neighbor’s horses. Though Wally was still pumped up (I think he was savoring his moment as King of the Herd), Cowboy seemed utterly exhausted. When I went with their halters to catch them, I found Cowboy snuggled up to Wally’s side. The two of them had become buddies. 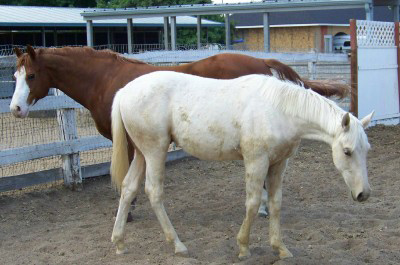 Why can’t humans be more like horses when it comes to our interpersonal relationships? Life would be so much easier if we acknowledged our leaders and respected their authority. That doesn’t mean we’re less valuable as individuals. But is it so demeaning to admit that maybe, in some situations, someone else is better equipped to be the head honcho? By just making a little bit of an effort, we could all get along peacefully, and that would be wonderful. After all, what could be better than having a friend who allows you to rest your head on their butt? 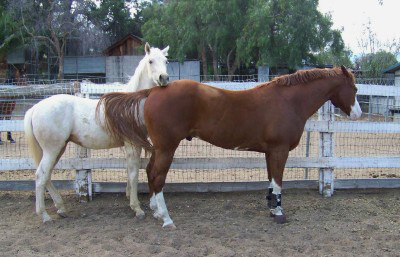