I’m always looking for ways to combine horses with holidays. At Christmas I decorate my tree with equine-themed ornaments. During past Halloweens I’ve won prizes for the costumes I’ve created for cooperative ponies. So when Easter rolled around this year, and I realized that my town was hosting a sunrise service at the community equestrian park, I figured, “Why not?” Horse owners were encouraged to attend by riding straight into the massive covered arena, while pedestrians sat in the grandstand. It sounded like just the thing for Joey and me. I called my friend Natalie on the phone and coerced—I mean cajoled—her into riding with me. The sunrise service was slated to begin at 7:00 a.m., which is technically after sun-up. But hey, if you want horse people to attend you have to give them a chance to feed their horses first. 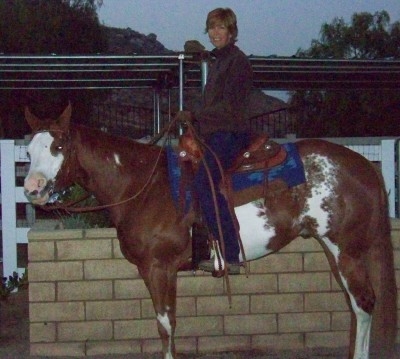 When I saddled up Joey at 6:00, he must’ve thought he was going to a horse show. It was so nippy that I zipped the collar of my fleece jacket up to my ears. I rustled Ron out of bed to make him snap a photo. He was shivering while I was commanding, “Just take the picture! I don’t care if Joey’s ears aren’t up!” 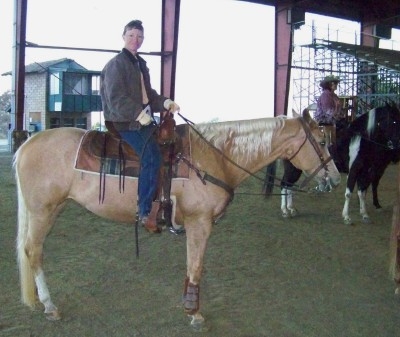 I rendezvoused with Natalie at the end of my street. It took us about 20 minutes to get to Ingalls Park, the site of the service. Natalie rode her mare, Goldie. The palomino is a veteran of parades: she’s participated in the Tournament of Roses Parade numerous times. We both determined she could act like a mentor to Joey. 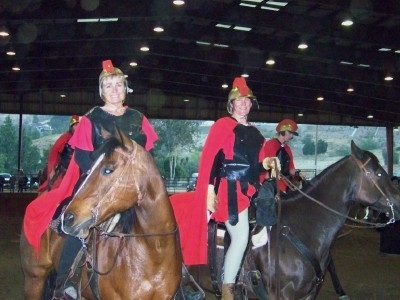 My town, Norco, has officially adopted the motto, “Horsetown USA.” Though it’s a snippet of a California suburb outside Los Angeles and Orange County, it’s quite unique. I mean, seriously, where else on Easter morning would you find a troop of Roman centurions mounted on horseback? (Disregard the fact that most of the centurions are female and that many of them are wearing Ariat boots underneath their tunics). 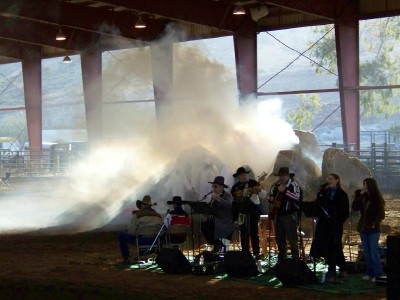 We had a talented live band. We had a homey country pastor. We had numerous citizens acting out the traditional roles. We even had huge boulders, bigger than my Dodge truck, dragged into the arena and constructed to look like a tomb. But not even a cloud of dense smoke—released as a special effect at the climatic moment—could camouflage that this was all taking place in our town’s rodeo arena. Thank goodness the herd of Brahmas and Herefords had been removed from the holding pens behind the chutes.

After the festivities, Natalie and I rode home the long way, enjoying the sunshine and the scenery. I was quite proud of Joey. Though there were times that he behaved like any three-year-old in church, fidgeting occasionally and displaying his boredom with yet one more verse of a hymn, he was otherwise a young gentleman. Now I have to figure out what to do with my horses to help celebrate Fourth of July.