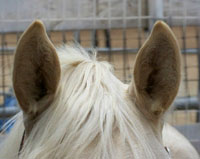 I’ve always been amazed at a horse’s acute sense of hearing. I have to tiptoe out my back door so that Joey won’t hear the creak of the hinges. If he does, he gallops to the end of his paddock in hopes that I’ll toss him a carrot.

I’m not the only one who’s noticed that a horse can distinguish the sound of crinkling cellophane from a cacophony of noises elsewhere in the environment. For example, I taught Wally to stand patiently at the corner of the main thoroughfare in town and wait for the signal light to change. I did so by reaching into my pocket, unwrapping a peppermint, and then handing it down to his waiting lips. The trucks, motorcycles and school buses didn’t seem so scary if he was pacified by crunching on a goodie. Now if he hears what might be the unveiling of a candy wrapper his ears prick forward in attention, just in case he might be on the receiving end of a bon-bon.

Unfortunately, my hearing has begun to falter, at least in my right ear. Ron was the first one to notice. He kept telling me that I cranked up the volume on the TV too loud. But I was also getting annoyed by the fact that my right ear felt perpetually plugged up. It got worse during the summer months, especially on trail rides. I’d be loping along, the sun on my shoulders, and my right ear would seem to squeeze shut like an airtight vault. When it would occasionally pop open the sensation was startling.

In other words, over the last year or so I haven’t been able to hear the rattling of peppermint wrappers.

After a trip to our region’s Grand Poobah of Eardom, it was concluded that my hearing loss is due to the smoldering remnants of sinus disease, a chronic illness I suffered with for a couple of decades. So I’ll be getting treatment for that. At least I’m only having problems with one ear. Fortunately I can hear perfectly fine with the other one. And isn’t that why God gave us two of them? 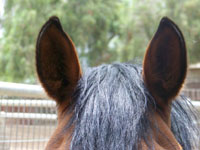 This whole ear escapade has given me even greater respect for a horse’s sense of hearing. I’m sure you’ve noticed how your favorite horse has his or her favorite sounds. My horses, for example, can differentiate the sound of my truck’s engine from any other vehicle. There’s little consequence if Ron arrives home. But the sound of my truck engenders a Pavlovian response of nickers and prancing feet. Even better, the electronic key alarm that beeps on when I climb out of my truck elicits an equine Ode to Joy.

“Huzzah! Cindy is home to stay! That must mean it’s getting close to dinner time!”

Then there’s the name recognition. I used to think that horses responded merely to the tone of my voice rather than the actual sound of their name. Now I know that isn’t always the case. Wally can be dozing in oblivion, but if he hears me call his name he whirls in his stall like Hollywood Dun It and races to the door.

It’s comforting to know that horses hear so well. We can whisper our secrets to them and they listen intently. We can laugh with glee when we gallop across a meadow or splash across a stream and they seem to agree with the sentiment. And when they’re particularly good, we can lean over their necks and scratch them beneath their manes and sing, “What a good boy you are.”

How wonderful that they can hear how much we love them.