On Sunday I judged the last of my scheduled shows for the year. I may yet get called by a show manager if they’re suddenly short a judge, but for the most part I can stow away my lucky clipboard and my collection of sun visors until next spring.

Like the other shows I judge, this one was a county-level rated hunter show. The location was in Rolling Hills, a horse-keeping section of Palo Verdes, an upscale community just inland from Los Angeles. There are lots of pepper trees and oaks, and the showgrounds are on the same site as a neighborhood soccer and baseball field and several nice tennis courts. I judge at this place every year. Because it’s right off the coast, it’s always cool, even during the dead of summer, so I’ve learned that there’s no need for me to dress in prim and proper judge’s attire. Why bother? I spend the entire time bundled up like an Eskimo. That’s because at this venue the judges’ booth is an open lookout tower, set well above the arena. The daily ocean breeze comes wafting inside, chilling me to the bone. That’s despite the rather cozy confines of the booth. I always share it with the other judge who is looking out her side of the booth at the arena she is judging. Once in a while we’ll bump into each other, knock each other in the back of the head with an elbow or lock the wooden legs of our chairs together. If it’s late in the day this awkward Dance of the Judges can elicit outbreaks of chuckles as we try our best to judge without kabonging each other. 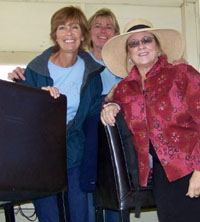 This time around I shared the booth with Regina Antonioli. She’s a well known USEF judge, and while she probably has the reputation among exhibitors as being all business and rather unmovable in her opinions, she’s actually a very fun, friendly person. Plus, she’s incredibly knowledgeable, so I get a chance to pick her brain a little and learn from her while I’m sitting behind her in the booth. What made this judging assignment even more fun was that one of my best friends, Andrea Meek, managed the show circuit this year. (That’s her in the middle of the photograph, while Regina is in the red jacket). Andrea not only manages shows, she’s also a USEF judge. So while all three of us were windswept and cold—as you can see, the show photographer didn’t exactly catch us at our best—we still worked together to put on a good show for the exhibitors. 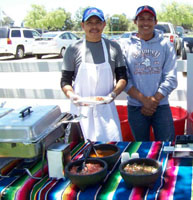 Adding to my pleasant day was the buffet of Mexican food served up by a really nice group of caterers. For once I could actually partake of the free lunch offered as a perk to the judges! This was far more than your typical taco bar. No boatloads of greasy nachos were scooped onto flimsy paper plates, and there weren’t any tortillas that were as tough as stirrup leathers. Instead, the steamy stainless steel chafing dishes held seasoned skirt steak, marinated chicken, yummy rice and frijoles. And, just for people like me who have stomachs that wince at the mere mention of jalapenos, they offered two versions of fresh salsa: “Hot as Hell” and “Is This Really Salsa or Merely Chopped Tomatoes with Onions and Cilantro?” Needless to say, I opted for the latter.

Because I had such a fun day, I’m almost sorry to see my judging duties end for the year. Although in retrospect I’ve had some very challenging experiences the last few months. For example, there was the one San Diego show that ran until it was halted due to a lack of lighting. It was long past dark, there weren’t sufficient arena lights, and I was so tired that I was beginning to feel like a zombie. The little boxes on my scorecards were beginning to merge into one big blob of squiggling lines. I don’t envision myself signing up for that duty ever again, unless the class list is modified to accommodate the number of exhibitors with the hours of daylight. In comparison, this show in Rolling Hills was a very nice experience. The exhibitors were properly prepared for their classes, their horses and ponies were impeccably groomed and presented in appropriate tack, and the level of riding was in accordance with the skill level necessary to be safe and successful.

Now it’s time for me to hunker down with Joey and Wally for the long, hot summer. Enough of the hunter show world until next year. I’m back to being the trail riding cowgirl. Yee-haw!