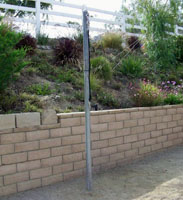 Have you ever heard the term “precognition”? It refers to those Twilight Zone moments when you get a hunch that something momentous is about to happen. Perhaps I’m psychically gifted, because just last week I was crowing about my large paycheck—figuring I could stock up on hay—when I suddenly got an ugly jolt of precognition. I literally said aloud, “Just watch me get hit with a huge vet bill.”

But let me back up a little. You see, it all began innocently enough. And in retrospect, the irony of it all is quite humorous. There’s a play on words coming up (precognition at work?). See if you can spot it.

I was having trouble getting Joey to tie up. He came from a barn where he was always tied to a patience pole (a tall, sturdy post where the tie is secured above the horse’s head) or the hot walker. While he was in training he was secured in the crossties. But when he arrived at my house, he was introduced to a horizontal hitching rail. That resulted in several 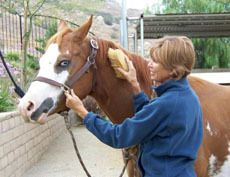 near-accidents that only a three-year-old horse can instigate. The most memorable one was where he began scratching his nose, only to get the half-circle loop of metal that his lead rope was actually tied to wedged under the noseband of his halter. He panicked and sat back, but he couldn’t really go anywhere because his nose was tethered to the hitching post. Fortunately, no one was harmed except me, as I stood there surmising that Joey needed a tall tie post. And that would cost some money.

Luckily I already had a very secure tie metal tie post. All it needed was a three-foot extension welded on to the top in order to re-create what Joey was used to. I paid the neighborhood welder guy $100 and Joey tied up like a champ.

And then he tied up again, but in a totally different manner.

Again, it all started innocently enough. I had ridden Wally for several days in a row, so I didn’t have the time or the energy to ride Joey for a couple of days. However, because I have this compulsive urge to continually shovel food into my horses’ mouths, I admit that I did not reduce Joey’s feed intake. He still got his sweet feed-based mix and his pellets and his horse cookies.

After these days off, Joey and I headed off down to the arena to work. After he was warmed up, we worked on some lateral movements. I suppled him up at the jog in both directions, and was preparing to lope when he came to an abrupt stop. Joey can be lazy, but this was uncharacteristic for him. I urged him forward with my spurs, and he went back to work. We loped some more, and then he stopped again. Being a conscientious horsewoman, I hopped off and inspected my horse. He looked fine. His gums were a normal color. He wasn’t breathing rapidly. He didn’t paw. In fact, he seemed perfectly happy.

Figuring he was just being an inattentive three-year-old, I climbed back in the saddle and jogged him in a giant circle. He felt great. But when I glanced down at his neck, I saw that he had broken out in a furious sweat. Now I knew something was wrong! I jumped off and began leading him down the short path home. With each step I could tell he was getting stiff. As soon as we reached my backyard I yanked off his tack and hosed him off with cool water and put him in his stall. I have ridden horses for forty years. I knew what was wrong. Joey was tying up. And this had nothing to do with the hefty steel post.

This is where that big vet bill comes into the story.

After a full examination and some banamine and steroids, my vet, Jennifer, pulled blood as a diagnostic tool to confirm if Joey had indeed tied up. An increase in certain muscle enzymes would differentiate from other possible causes, like an atypical bout of colic or a horrible muscle strain.

For those of you unfamiliar with tying up, think of it as muscle spasms that suddenly overwhelm a horse, rendering them unable to walk in the worst cases. It comes on during exercise, usually within the first 10 to 20 minutes. In the past, it was euphemistically known as Monday Morning Sickness because horses kept on their regular grain ration on Sunday, when they were resting, would exhibit symptoms of tying up when they went back to work on Monday.

Sure enough, Joey’s blood work indicated he had indeed suffered from some sort of tying up episode. But was it a once-in-a-lifetime occurrence, due to having several days of rest with too much high-energy feed? Or was this the first sign of a hereditary disease called polysaccharide storage myopathy, or the hereditary disease PSSM? In PSSM, horses store too much glycogen (sugar) in their muscles. They are super sensitive to the insulin that’s produced by eating a diet full of carbohydrates and starches, which raise blood sugar levels. That causes chronic cases of tying up. Many PSSM horses never demonstrate symptoms simply because they’re worked continuously and naturally fed diets low in carbohydrates and sugar. Their owners never know their horses even have PSSM.

I’m not quite ready to have a muscle tissue biopsy done on Joey to confirm if he has PSSM. That’s because the treatment for PSSM is basically the same as preventing another occurrence of plain ol’ tying up syndrome in non-PSSM horses. Here’s the plan: The horse is kept in optimal condition. All grains and molasses are eliminated from the diet. Fat replaces carbs as the energy source, so the horse is placed on a high fat diet, which includes rice bran drizzled with vegetable oil. The only other addition for Joey—since I decided to just assume he has PSSM—was that he needs to be on a daily supplement of Vitamin E. I also took the extra step of adding a trace mineral and vitamin supplement, just in case he wasn’t getting enough in his diet.

That meant no more corn and molasses-based horse cookies. No more oat hay pellets. And no more sweet feed. EVER.

When I continued to read up on PSSM, I discovered that research has shown that as many as 6% of all Quarter horses and Quarter horse-type horses (like Paints) may have PSSM. That got me to thinking about how Wally periodically had bouts of vague hind end lamenesses that my vet could never really diagnose. It would come and go, always after a hard trail ride, and disappear completely within a day. Wally was on the same fattening program—I mean feeding program—as Joey. Yet since he’s been living at my parents’ house, and on a diet, he has never had the problem again. I read some more and learned that mild symptoms of PSSM include episodes of stiffness in the hind end, occasional hind end lamenesses and a reluctance to collect or shorten the stride. That’s Wally! Or at least it was. Now that he’s off the Cindy Hale Fat Farm Diet, he’s fine.

See how even after all of my years spent around horses, I am still learning something new? I grew up around Thoroughbreds and dull, lumbering warmbloods. None of them had any problem being plumped up with goodies or living an occasional life of leisure. This change in feed management and will take some adjustment. I can no longer delight in grabbing armful of horse goodie bags at the feed store. Carrots will be fine. And on those days when I am physically unable to ride, like when my arm is really hurting or I’m feeling icky from my medicine, I’ll just have to stick Joey on the longe line for a few minutes. You’d think that with my gift of precognition I could’ve foreseen that my life with horses would have a major upheaval like this.