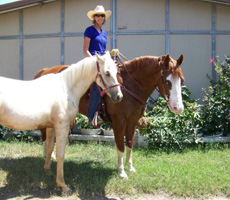 It’ll take a little longer for Joey to be fully back to riding condition following his episode of tying up, so I’m spending more time with Wally. I’m not entirely sure the blaze-faced lug appreciates it, because from his perspective the extra attention translates into more work. So I decided to make a 90-minute trail ride a little more fun for Wally by bringing along his new best friend, Cowboy. The mere idea that Wally would ever be a reliable pony horse would’ve seemed impossible a few months ago, however, he’s taken quite a liking to the lanky palomino yearling. Cowboy is utterly intimidated by Wally, yet at the same time he seems to worship at Wally’s feet. The mutual adoration makes them a perfect pair for ponying along the streets and up through the hills.

Keep in mind that I never know what sorts of animals are lurking in the backyards and open fields that border the bridle paths. Pot-bellied pigs, emus, miniature donkeys, turkeys and even a couple of camels—yes, I said camels—live within the city limits. Honestly, I try to avoid a lot of these creatures. I really don’t see the need to de-sensitize my horse to all the inhabitants of Noah’s ark. But unfortunately, llamas are becoming unavoidable, which makes me wonder if there’s some kind of llama mania at work in our society. Are they the new designer pet? Or are there a lot of people getting in to spinning exotic wool at home?

To be honest, I kind of like the furry creatures. When they’re gentle and tamed, they move elegantly, like long-necked models on a fashion runway. When they’re well-groomed, I look at their glossy coats and imagine a closet full of squishy hand knit sweaters. But when they’re half-wild, they tend to snarl their lips, wrinkle their brows and charge the fence line. And that’s what happened yesterday when Wally, Cowboy and I found ourselves face to face with a small herd of not so friendly llamas.

I think what surprised Wally the most was that he’s been past this very same corner lot at least twenty times. On a couple of occasions there were longhorn cattle in the field. They made Wally curious, but after some hesitation and snorting, he went passed them. Then, miraculously, they disappeared and the field sat vacant for months. Now here we come, gleefully jogging along, Cowboy matching Wally’s hoofbeats stride for stride, when what do we all discover on the hillside but a bunch of llamas!

These were not nice llamas. As I allowed Wally and Cowboy to inspect the scene, the exceptionally large brown llama rose from the ground and sashayed up to the fence with a look that said, “Oh yeah? Wanna fight?” 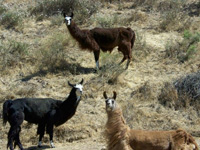 There must be some intra-species dialect or body language that allowed Wally and Cowboy to understand that they were equines non grata, because I was suddenly facing the opposite direction as Wally and Cowboy decided they wanted the heck out of Llama City. Now, not being one to back down, I decided that we were all going past the llamas, one way or the other, in order to continue our trail ride. I recalled my friend Natalie’s advice about what to do when encountering insurmountable obstacles on a ride: “When in doubt, dismount and lead your horse past it.” After all, she added, “You have don’t have anything to prove to anyone. It’s better to just be safe.”

So that’s what I did. I hopped off and led my two horses across the otherwise very quiet street, and we poked along with two lanes of asphalt between us and the pack of shaggy suspects. Then I hopped back on Wally and we continued, passing a house surrounded by leafy pepper trees. A lady on the porch called out, “Are your horses afraid of the llamas?”

“That’s funny. Because earlier another couple of riders came by and they had to get off and lead their horses across the street, too.”

Well, I didn’t particularly find it funny. But it was comforting to know that my horses weren’t the only ones afflicted with llamaphobia.

The rest of our ponying ride was uneventful and quite enjoyable. As we turned for home, Wally began to anticipate going past the llamas. Yet I wasn’t about to take the long route back to my parents’ place. He was just going to have to man up a little. Though I did choose the opposite side of the street from the llamas—who were eyeing us with disdain the whole time—I did stay in the saddle this time. And we made it!

Maybe next time, Wally will make it past the llamas. But I’m not going to press the issue. I just pray that if and when the llamas leave, they won’t be replaced by yet another unusual animal. Giraffes, anyone?