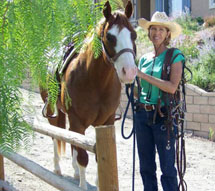 There’s a lot of coming and going in the world of horses. It seems like I’m always leading a horse in or out of its stall or snapping on a lead rope and leading it to the hitching post. No wonder my feet are killing me at the end of the day.

This past Sunday I led Wally out of my backyard and stood on the street corner in front of my house and waited for my sister. She was hauling her horse, Topper, from where she keeps him at our parents’ place, and was going to pause just long enough for me to drop the ramp and scoot Wally inside. We had planned all week for this sisterly ride at the river park.

Again, you see, I was experiencing more coming and going.

Fortunately, because we bred and showed warmbloods for years, our family has an over-sized trailer. That means I can save some time and hassle by saddling up Wally beforehand and then hauling him with his western saddle in place. It’s only about an 8-minute drive to the river park, and there’s plenty of room for a plus-sized Paint gelding and his saddle.

I stood on the corner for much longer than the ten minutes it takes to cruise several blocks from our parents’ ranch to my house. Though Wally seemed perfectly happy to stand there, as if he were patiently waiting for the next tour bus, I was getting annoyed. Where was my sister? We were trying to beat the summer heat, and it was already over 80 degrees at 9:00 a.m.

I flipped open my cell phone and called my mom. “Has Jill even left yet?”

“Well, Jill was grooming Topper before she put him in the trailer. He was just standing there in his halter, eating grass, and she let go of the lead rope to pick up his feet and put his bell boots on.”

“Uh-huh.” I could see where this was going.

“The front gate was open and…”

“All the way to the street?” I asked. My voice had begun to take on a shrill quality.

Now, before you panic, you need to understand that my parents live on a very quiet, sleepy country road. Sure, it’s paved. And there’s a faint white line striped down the center. But there’s very little traffic since it’s not a thoroughfare. Yet it is a street, nonetheless, and every street ultimately leads somewhere.

My mother continued. “Thank goodness the guys who live across the street—the big guys with the ponytails—heard us yelling, ‘Topper!’ and they came running out of their front yard and waved their arms and Topper stopped. That gave us enough time to catch up to him and grab him.”

My mother’s descriptions of the rescuers notwithstanding, I got the whole picture. Topper has done this sort of disappearing act before. Just when you think he’s fully ensconced in gorging on grass, he’ll sneak away. It’s starts out with him tip-toeing a few inches. Then he takes a big, lanky step, leaving you to grab first for the lead rope and then, in desperation, for the end of his long brown tail. And then, whoosh! He’s gone. He is, after all, a Thoroughbred ex-race horse.

As evidence, one of the pony-tailed men remarked, “Wow, that horse is really fast!”

And thus you can see why I was left standing on my street corner with Wally for much longer than I had anticipated. But eventually my sister did arrive, and Wally jumped into the trailer with all the gusto of a dog going gleefully for a ride in a car.

Jill and I had a wonderful ride at the river. I always enjoy riding with her. She is, after all, my sister. The two of us share a history with horses that stretches way, way back, beginning when we were forced to share our first pony. Then we traveled the show circuit together on so many different horses that recalling their names and dispositions could be a parlor game.

Topper and Wally enjoyed each other’s company as well, although Wally continuously had to remind Topper that he could get close, but not too close. By the end of our ride, the four of us were happy but tired. And as always, as soon as our horses had scampered into the trailer for the drive home, Jill and I began planning some more comings and goings with our horses.