Isn’t it amazing how, just when you think you have things all planned out, life comes along and messes everything up? That’s especially true when you’re living your life with horses.

For about 20 years my mother, sister and I bred and raised some very fancy warmbloods. We crossed carefully selected Thoroughbred mares with branded warmblood stallions. Our goal was to produce show hunters, and indeed we brought forth quite a few lovely horses that went on to successful careers with their new owners. Such an endeavor required quite a bit of energy and dedication. Each spring we deliberated over keuring results and USEF standings. We hauled our youngsters to sport horse classics and showed them in-hand so they got used to strutting their stuff in front of a crowd. Nearly every weekend we lived the life of nomads, venturing to anonymous showgrounds where our greenies could trot around their first courses without the stress of competing for a ribbon. It was a glorious era, but eventually the physical challenges of maintaining such an equine enterprise took their toll. About the time I was contemplating hanging up my spurs I ended up being injured so badly that riding greenies and competing on the circuit was impossible. We were suddenly left with several homebred horses that needed to be sold. One Dutch gelding went on to be a dressage horse, a job I think he actually enjoyed more than jumping. An Oldenburg mare that’d been both a wonderful hunter and a brave jumper lucked into a role as a professional broodmare. My equitation horse, a part-Trakehner mare, segued into a three-day eventing star. Who knew she had any talent for splashing across ponds and jumping stacks of logs? The one horse that we couldn’t quite find a place for was April. 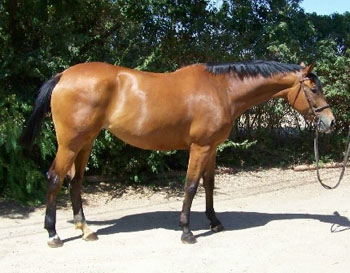 April was bred to be a hunter champion. Her sire was Alla Czar, a consistent winner in the tough amateur-owner hunter division on the A-circuit. He was not only gorgeous, he was also blessed with almost freakish jumping style and an unflappable disposition. April’s dam was our mom’s Trakehner mare that had won green conformation hunter classes until she got irretrievably cast in her stall one night and fractured her sesamoid. Beyond her sire and dam, April had numerous noteworthy half-siblings and “cousins” that had won classes and championships at major shows. Genetically, she was poised for stardom.

So why didn’t April mature into a champion? Well, for starters, her dam died tragically soon after she was born, and we weren’t able to locate a suitable nurse mare. If you’ve ever handled orphan horses, then you already know that they often grow up with “unusual” personalities. That goes double if, like April, they are bottle fed. April never quite comprehended that she was a horse and not a human. That made for some interesting schooling sessions once she began training. Unfortunately, she also developed an almost obsessive oral fixation. To this day she has moments where she’s anxious or nervous about… something. We simply learned to ignore it because under saddle, with a bit in her mouth, she’s calm and tranquil. But it wasn’t the sort of behavior the average person would tolerate.

On top of these considerable idiosyncrasies, April sustained an injury while she was away in professional training. Just as she was perfecting her flying lead changes and cantering courses with a rhythmic stride, she bowed a tendon. That coincided with my illustrious injury, so the two of us faced the end of our equine sports career almost simultaneously. I had dreamed of campaigning her in the baby green hunter division and sweeping up every blue ribbon in the under saddle classes. But that was not to be. Fate cancelled those plans for both of us.

Though April healed sound and virtually blemish-free, our vet considered it a gamble to thrust her back into full training. But after a couple of years of being a certified lawn ornament, we decided to make use of April’s genetics. We bred her to an all-around AQHA sire and ended up with Cowboy: a palomino yearling that moves like a Trakehner and is built uphill like a warmblood, but who has yet to display talent for any purpose other than Recreational Vehicle. Though contemplating what April might produce if bred to a more athletic individual is tantalizing, neither my sister nor I are in any position to wrangle with foals and greenies. So I don’t foresee April churning out a herd of foals. Besides, in today’s over-populated horse market that would be irresponsible.

Thus the pretty, 16.2-hand bay mare hangs out at my parents’ little ranch. She has a large paddock shaded by a leafy pepper tree. Nearly every day she’s turned out for several hours in the arena: a large, fenced, angular space that was once crammed full of schooling jumps like oxers, stone panels and flower boxes. April’s nine years old now and the bright potential she once held is gone. Now she’s not much more than a pet without a purpose other than to enjoy her life—the one she struggled to grasp when only a few hours old. Yet isn’t that perfectly alright? There must be something admirable about caretaking a quirky homebred horse for the rest of its days. After all, April is, more or less, the last memento of a distinctively wonderful life my family and I once spent with horses.