Nearly every photograph I see depicting a trail rider is set in a lush backdrop like a verdant meadow, a forested glen or a southwestern panorama. Being a journalist myself, I understand that editors seek lovely photos that illustrate the ideal. But most of my trail rides are more like real life obstacle courses. Unless I’ve trailered Wally or Joey someplace for the day, like to the river park or the lake, I’m stuck cruising the bridle paths of my neighborhood. And that, my friends, can be challenging. There’s quite literally a surprise around every turn.

As I’ve mentioned before, I live in Norco, California, which has adopted the moniker of, “Horsetown USA.” It’s a befitting motto, since the horses boarded at the town’s stables or sequestered in private backyards outnumber the humans by a substantial margin. Yet there are also all kinds of other critters that dot the landscape. Previously I’ve written about the llamas, the emus and even the two camels that reside in town and intermittently raise havoc among the horses that happen upon them. That’s why there’s a saying around here: “There are trail broke horses and then there are Norco trail broke horses.” In other words, not every trail horse, regardless of its training, disposition or past trail experience, is capable of handling the local scenery. Tales abound of people who’ve purchased so-called bombproof trail horses from out of the region only to have them come unglued and suffer a meltdown after a few weeks in Norco. 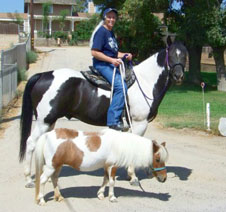 The typical weekend on Norco trails is like a parade of equines. It’s not unusual to share some space with well-equipped mules, Clydesdales pulling carts, ponies packing children and prancing Andalusian stallions. The other day I met up with one of my neighbors, Marti, who was riding her Paint gelding, Billy, while ponying her mini-pinto mare, Dolly. That’s a curious pairing in the mind of nearly every horse. Further down the same street was The Pig House, so named because its front yard is a haven to an extended family of pot-bellied pigs. The big fat daddy of them all is named Kramer. The porcine patriarch is thirteen-years-old, the owner told me. I’m not sure of the mommy pig’s name, but she is quite plump and matronly.

The pigs’ owner shared, “If I’m outside and I see riders approaching, I’ll tell them, ‘Hey, just so you know, I have pigs in my front yard!’ Some of the horses get really freaked out by them.”

Such neighborliness is admirable, don’t you think?

Fortunately, both Wally and Joey have acclimated to the trails around here. I think that’s because Wally was relieved to just get the heck out of the show pen at any cost. Plus he’s a rather macho dude. Although he would just as soon avoid another confrontation with the emu that lives across the street from the high school, he rarely backs down from anything else we encounter. Instead, he arches his neck, puffs himself up and struts on by, as if he’s daring the suspicious entity to provoke him. Joey, on the hand, is benignly oblivious to potential dangers. You know those thought bubbles that cartoonists draw above their characters’ heads? Joey’s thought bubble while on the trail would be filled with mental images of grassy pastures, fluffy bunnies, fawns and birdies. He simply doesn’t notice what’s lurking in a front yard or tucked behind a tree. Joey is the four-legged embodiment of Oscar Wilde’s saying that, “’Tis folly to be wise where ignorance is bliss.”

So if your typical trail ride has you meandering past woodland streams or cruising leisurely across a clover field, keep in mind that not everyone is so blessed. Perhaps I can enliven your trail riding experience and ship a pig your way.