Apparently there’s still one thing my husband Ron can’t quite accept when it comes to having horses in our backyard: They come along with a lot of dust and dirt. That is indeed his greatest frustration because my husband hates grime on the floor, sandy grit on countertops and tiny little pebbles of decomposed granite that bite into his bare feet. Imagine that!

Thus our biggest battles are over cleanliness… or the lack thereof. If Ron could enforce his dream rules of domesticity, I would climb out of the saddle, sprint to the tackroom, shirk off my jeans (because they’re sopped with horse sweat and encrusted with arena dirt) and hop into a robe fit for entering the house. Of course, that’s not going to happen. But I do make an effort. I make use of the whisk broom he stashed by the back door and brush off the cuffs of my jeans before entering. Oh. And I also remove my boots. 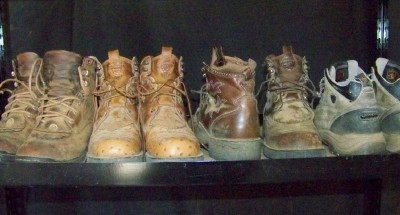 The whole Boot Removal Edict is an absolute deal breaker when it comes to marital bliss. And I can’t honestly say I blame Ron for issuing such an order. Half the time the soles of my boots are embedded with flattened crusts of manure. Or worse, they’ve absorbed some kind of caustic hoof elixir or topical antiseptic brew that makes them smell as if I’ve just left the county morgue. Yes, despite the passion I feel for my horses and the lifestyle that comes along with them, I must admit that there are many odors associated with barn activities that offend the average person’s nose and palate. It probably is a good idea to step out of my boots before waltzing into the kitchen. I mean, it’s not like my kitchen is a saloon. Last time I looked there weren’t swinging doors at the entrance and Wally wasn’t tethered to a rustic hitching post just outside the window.

And so, to keep the peace around here, I have learned to simply stow my boots. Ron was both delighted and eager to round up a sturdy stack of shelves where I could stash my boots, pair by pair, and leave them where they belonged when not in use: in the garage. However, I ultimately have the final say (as most wives do). Don’t tell him, but there have been many times when I’ve kept my boots on while I’ve scampered inside to grab the keys to the gate or guzzle a drink of water before heading out on a trail ride. If Ron’s not home I linger for a few moments, wrinkling my toes inside my boots, relishing the sense of freedom and independence that comes from wearing my boots inside the house. And then, when he ends up by discovering a bit of grit here or a chunk of dirt there, and asks me about its origin, I just smile and say, “Oh, I think the dog probably brought that in.”