It’s customary for the winner of a horse show class to receive some sort of award along with their blue ribbon. In years past it used to be a memento that was stamped or etched with the name of the show and the date: a silver plate, a crystal bud vase or a porcelain trinket box. Nowadays you’re lucky if you receive a bundle of crisp carrots or a hoof pick.

One entire season at a prominent hunter-jumper show site in Southern California (which shall remain nameless) the winners of every class were handed a tiny box along with their blue ribbon. I won three of these elegantly wrapped presents. Oh, the giddy anticipation of what treasure would be revealed! When I got back to the show barn I hopped off my horse and hurriedly ripped open the gift box. Beneath the wrapping paper was a little itty bitty carrying case. Did it hold a pair of earrings? A cloisonné pin? A silver locket?

No. Inside the tiny case was an assortment of tiny tools. Yes, that’s right. Miniature tools. There was a little hammer, a little screw driver, a little wrench and a microscopic set of pliers. A moment of stunned silence was then followed by rounds of shrieking laughter. Had I been duped? Was this a joke?

Then we could hear the rumblings of amazement and ripples of laughter rising up from row after row of stalls, as the winners of subsequent classes unwrapped their miniature tool sets. Were we all mistaken for Santa’s elves? What on earth were we supposed to do with these itsy bitsy articles of woodworking and garage repair?

My sister tried to make the best of the situation and grabbed the diminutive screw driver out of my packet and tried to jangle the lop-sided handle of my tack trunk into compliance. Nope. The impotent screw driver was incapable of even that task.

The miniature tool sets became a running joke throughout the three days of the show. The announcer claimed he was trapped inside his booth and needed someone to chink open the window pane with their tiny hammer so he could escape. Things like that. Complaints to the horse show office were pointless. No one there seemed impressed by the fact that each exhibitor had spent $20 or more on each class, only to receive a totally worthless award. Truly, at least our horses could’ve eaten a bunch of carrots. But useless miniature tools? Please. We’d all rather have a plastic sweat scraper.

The next time the circuit began at that showground, we were treated to a different set of awards. This time we had a choice: a brass key fob emblazoned with the site’s logo or a handheld, battery-operated plastic fan that had power equivalent to someone blowing you a kiss from a yard away. Was the show management trying to irk us? Or just trying to save money? That’s the problem when you’re competing for points and year end awards. As an exhibitor, you’re locked into participating at a show, regardless of how chintzy the prizes are. You just have to keep your eyes on the possibility of nabbing some glorious award at the completion of the year, like a horse blanket. In the meantime you suck it up and just accept the really chintzy handouts.

And yes, I fully realize that showing should provide its own intrinsic rewards: personal accomplishments, achieving a long sought-after goal, and finally working as a team with your horse. But at a certain point, fair is fair. Shouldn’t the first place prize be worth at least the cost of one entry fee? Shouldn’t a class that costs $20 to enter provide a prize worth $20 to the winner?

This downward trend in awards has seeped into other shows, at least here on the west coast. My friends competed at a major AA-rated show last year that cost them hundreds of dollars for one week of participation. For each first place ribbon they won… a crystal shot glass. What’s the implication there? Are they supposed to celebrate by downing a gulp of Jack Daniels? Another pal of mine won a large jumper class and was presented with a set of barbecue utensils. Huh?

Since I don’t compete any more, I guess I really shouldn’t complain. Yet the other day I participated in a photo shoot for an article I wrote for Horse Illustrated. I’d interviewed a prominent western trainer, and she modeled for the photographs. When she slid out of the saddle, I exclaimed, “Hey, that’s not fair!” 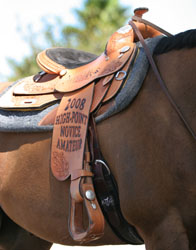 She’d been riding in a nicely crafted, everyday work saddle that was obviously an award from a horse show. The stirrup fender was boldly stamped with the title of a recent championship.

“Oh, one of my clients won this,” was the trainer’s casual response.

You see, on the western and breed circuits, many of the shows offer tangible, useful, quality awards to first place winners and year end champions. They get things like leather jackets, silver headstalls and saddles. A few even win horse trailers! I look back over my show career which, by most estimates was a highly successful one, and I have only a few mementos that remain: a musical snow globe, a small oak jewelry box, a china plate and a monogrammed nylon jacket. My horsemanship medals are encased in a shadowbox hanging on my office wall. But other than that, everything else has disappeared or been tossed aside. What’s the life expectancy, after all, of a plastic handheld fan?

Honestly, in my next life I’m coming back as a cowgirl and competing on the western circuit. Someone, somewhere, owes me a trophy saddle.