I really love my husband Ron. Who else would put up with a horse crazy woman like me? But sometimes he goes a little too far with projects that involve the horses. A case in point is the stall. I purposely had it built extra large so that if Wally or Joey had to be shut inside for a couple of days due to inclement weather they would still have room to roam around. Plus I wanted it to be open and airy. I did not want a fully enclosed box stall. Both of my horses like a room with a view, especially because there’s so much to see from atop our little bluff. Observing the comings and goings on the street and bridle path below is like Horse TV to them.

Yet with the threat of an upcoming storm, Ron suddenly decided that after nearly three years of living here we needed to enclose the upper half of the stall. I have learned that it’s best not to argue with a Horse Husband Possessed. Once a horse husband decides that they are going to create something wonderful for the horse their wife loves, you simply cannot stand in their way. Besides, they’re generally wielding power tools, so standing in their way would be foolhardy.

Anyway, the original plan was to just partition off the backside of the stall, all the way to the roof. That would prevent the wind from blowing rain into the stall. That seemed like a rational idea to me. But alas, that concept morphed into enclosing nearly all three sides of the stall, with only the front section being left open.

Of course, I was recruited into serving as Construction Site Apprentice. Keep in mind that I have a partially paralyzed right arm. I am unable to lift my right hand above my waist unless I contort my body like a gymnast. Yet my official job description was to help heft huge planks of OSB board (don’t ask me what OSB stands for) and hold them in place while Ron (who was inside the stall) would drill through the boards and insert a bolt. Then I was supposed to place a thin washer and a corresponding nut (my, isn’t that an appropriate term!) onto the aforementioned bolt. Then I’d place a wrench on the nut while Ron tightened the clamp from the inside. Voila! The OSB board would remain in place.

Ron told me this would be a simple job, completed in one afternoon. But that turned out to be a vicious rumor meant only to lure me into being a junior contractor. We worked for two solid days until dark, plus another half day, turning the stall into a room addition. I thought we were retrofitting a stall and what we ended up with was a project befitting Habitat for Humanity.

What finally halted this Extreme Horse Home Makeover was when Ron was hurriedly trying to add one more clamp onto a plank of OSB board and he drilled all the way through and into the palm of my hand. No, I am not kidding. And yes, it hurt.

Once I had become bloodied, by my own husband, mind you, I decided that the project was officially finished. 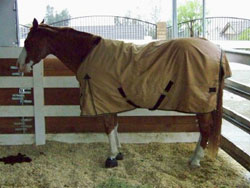 Yesterday evening, just as the rain began, I led Wally into the stall. It was indeed very cozy and he slept quite comfortably, even as the wind picked up and the first cold front moved through. This morning I got up shortly after dawn, shimmied into my rain gear, and mucked his stall and dumped in a bunch of fresh shavings. After all that, I have to share this photo that I took this afternoon. It’s pouring rain but Wally—being a typical horse—has not only pooped in the newly cleaned, refurbished stall, but he has also chosen to stand alongside the last remaining open section of the stall. He is outside the OSB Zone. He probably figured that this area served as his window on the world, where he can still see the panorama of the neighborhood. So, you see, after all of Ron’s efforts and my pierced hand, my horse remains partially out in the weather, where the raindrops can plink down on his butt, anyway! Ain’t life with horses grand?