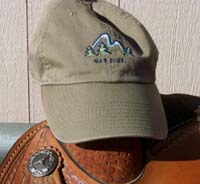 It’s no small coincidence that the ball cap I grab most often when I go for a trail ride bears the caption “Get Lost” over the brim. It’s meant to be a play on words: to blissfully get lost in the beauty of nature whilst hiking or backpacking. But for me it’s an inside joke. It refers to my infamous lack of navigational skills.

I could literally lose my way driving around town. Don’t believe me? Many years ago my family was headed for a weeklong horse show in Northern California. I decided to start out early in my own car, ahead of my father who was pulling the horse trailer. About an hour later I returned home, disgusted with myself because I’d left without a map. It wasn’t that I couldn’t find my way to San Francisco. It’s that I couldn’t even find my way onto the freeway.

Now you can probably understand why my sister, Jill, wasn’t especially thrilled when I offered to take her on a trail ride to a large park in a neighboring county. She was even less thrilled when she noticed I’d brought along my notorious ball cap.

As soon as we’d loaded Joey and her horse, Topper, into the trailer she asked, “You do know where we’re going… right?”

“Sure,” I said confidently. 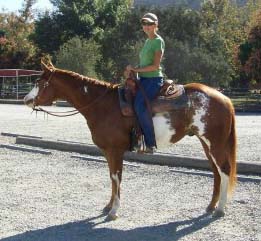 We arrived at the Orange County park and unloaded our horses in the gravel-covered parking lot. Joey and Topper are each other’s best pal, so the two sorrel and white geldings stood quietly while we tacked up. It was a perfect autumn day in Southern California and I was confident we’d have a pleasant ride through the oak trees and mesquite. Once we were mounted, I motioned for Jill to follow me.

Regardless of where I aimed Joey, it turned out to be a false start. Were we never going to leave the parking lot? I began to get a complex, feeling as if the rangers were sitting inside their log cabin, watching us through the window, and laughing.

We’d made an abortive attempt to cross a dry creek bed, only to discover that neither of our horses fancied wading knee-deep into a basin full of parched sycamore leaves that crunched under their feet. Imagine that. Then I rode Joey through a maze of paths that meandered past a naturalized butterfly sanctuary. When I saw the observation deck and realized I was beneath a low-slung arbor, I pulled Joey to a stop. From behind me I could hear my sister call out, “Uhm, Cindy, I don’t think this is a horse trail.”

It wasn’t. In fact, the trail became narrower and narrower until we were forced to crouch down onto our horses’ necks like jockeys in a starting gate. Thankfully our geldings are used to such foibles and they didn’t panic. Ultimately I got us extricated and we went back to Ground Zero. From our original starting place—the parking lot—we gazed around until I finally spied the trail head for the bridle path. And off we went. 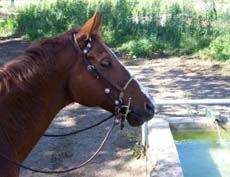 It actually turned out to be a nice ride, even though there were a couple of times where I had to stop and reconnoiter our location for fear we’d end up wandering the undeveloped wilds of suburbia for eternity. My trail guide skills caused us to weave in and out of the park, roaming from paths clearly marked for equestrians to thoroughfares definitely not meant for horses. For example, I’m pretty sure we weren’t supposed to end up crossing the tracks for the park’s miniature railroad. However, I did stumble upon a lovely water trough. Both Joey and Topper drank from the cool, clean tank like parched camels. It couldn’t have been because they were hot. They’d hardly broken a sweat. I think it was more because they’d calculated their chances of being lost in the wilderness and decided they’d better drink up while the opportunity presented itself.

Eventually I re-discovered the horse trailer, even if it meant that Jill and I had to ride through a grassy picnic area to reach it. (Again, probably not the ideal route for horses). I swear, on our next trip to that park I’ll be better prepared. I’ll know right where the trail head is and we can head straight to the bridle path. Of course, first I’ll have to remember how to get to the park. 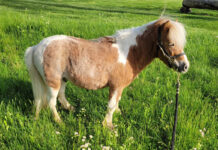