In case you haven’t heard the dire reports on the national news, it’s typhoon season here in Southern California. Or so it seems. We’ve endured a drought for years and now we’re making up the deficit with a series of heavy storms. It’s been raining for five days straight. Occasionally the sun will tease us, peeking through the clouds just long enough to charm us with a rainbow, but then the rains begin again. Caring for horses adds a heightened sense of concern to the current battle against Mother Nature.

The weatherman had forewarned us for at least a week. Every evening on the network news he’d prance around in front of the Super Whopper Doppler 9000 Weather Map and proclaim, “It’s going to pour! For days! Really, I’m not kidding!”

Not being one to ignore a well-coiffed man in a pinstriped suit, I went into Storm Mode. Both Wally and Joey had been living at my house for a few days, enjoying a Paint gelding slumber party. I’d swap them around so each horse spent half a day inside the big box stall and half outside in the paddock. But with The Storm of the Century approaching, I didn’t have the facilities to keep both horses cozy and dry. One had to be sent to my parents’ place, where there were several empty stalls. Since Joey is smaller and has the more benign disposition, making him easier to contain inside for several days in a row, I sent Wally packing.

It took me about 40 minutes to ride Wally across town to my parents’ house. I tidied up a stall in the barn that once housed our string of show horses. Then I put Wally to bed. Because he spent several years touring the show circuit, he was perfectly happy in his motel room.

Then I went home and prepared Joey’s stall. I plumped it up with fresh pine shavings and built a levee of pelleted bedding along the inside of the walls. The stall doesn’t leak, but with the doom and gloom forecast I figured some water was bound to find its way inside. The pelleted bedding soaks up any moisture and then… Poof! It expands into dense drifts of absorbent sawdust. Kudos to the chef who concocted that recipe!

Of course, Joey was totally oblivious to my frenzied machinations. He just grubbled around for any leftover fragments of his breakfast and ignored me.

And yet I could see the army of thunderheads approaching. It was marching in from the coast in battalions of plum and indigo clouds. 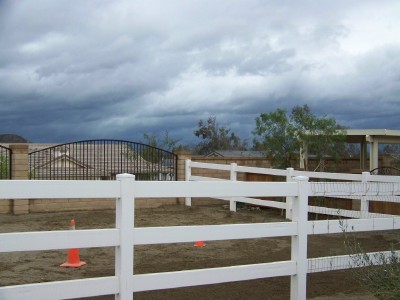 Last Sunday night the showers began. They built to a mean crescendo by Thursday afternoon, complete with brassy jolts of lightning and wallops of thunder. Hunkered down in my craft room, I worked on a mosaic—a galloping horse fittingly brought to life with small glass tiles of stormy blue—and listened to the radio. In the midst of a song the National Weather Service interrupted with an emergency announcement. Between the harsh blurts of the alarm I could hear the words clearly: There was a tornado headed toward the cities of Corona and Norco.

My horses and I live in Norco.

I tried to console myself with the knowledge that this would not be the type of tornado Dorothy faced in the Wizard of Oz. But combine 90mph winds with horizontal rain and you get the idea.

Like a fireman rousted to a call, I shimmied into my rain gear and squished my feet into my muck boots. I had one last bag of shavings I could put in Joey’s stall and I made the decision to do it before the apocalyptic weather arrived. The way the wind was blowing, I figured I had just a few minutes.

I had just scattered the shavings into the center of Joey’s stall when it hit. I have never, ever experienced such rain in my life! The noise was deafening. The cold blast of wind rattled the metal roof and paisley shaped drops of water let go from the steel frame and plunked onto the hood of my parka. Water was driven like icy nails between the wooden planks of the stall. Handfuls of tiny red berries were shook loose from the pepper trees on the hill and flung through the air like buckshot. Instinctively, Joey moved to the center of the stall, his tail into the wind. And then he stood there, very, very quietly. I put my arms around his neck and hugged him, pinching his quilted blanket with my fingertips. I could feel his warm breath on my neck as he sniffed my face and then pressed his muzzle into my back. The two of us comforted each other, beast and human, as the angry outburst swirled about us. And then, as abruptly as it arrived, it ended.

The wind settled into long, heaving sighs and the rain retreated into a subdued yet confident rhythm.

I opened the stall door and crept out into the rain, resigned to getting drenched. I sloshed to the feed shed and plucked a flake of orchard grass out from under the tarp and took it back to Joey. As I approached in the darkness, my figure shrouded with layers of Gore-Tex and rubber, he pricked his ears and studied me. But when I called out to him, “Easy little man, it’s just me,” he softened his stance and greeted me with a nicker. I tossed the grass hay over the stall railing, so that it landed at his feet. He began munching away, his sweet face calm with the knowledge that he was safe and dry. 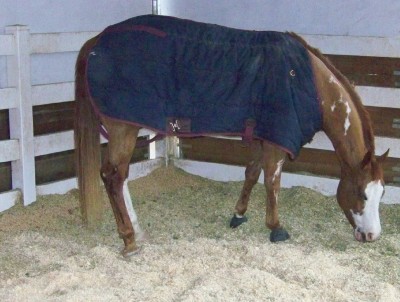 And I headed to my backdoor, unsnapping my parka as I went, starting the process of unpeeling one soggy layer after another. With more rain in the forecast, I was ready for a meal and a nap in a clean, dry bed myself.

Back to Life with Hxorses