I’m almost afraid to jinx myself, but it hasn’t rained in the last 48 hours. This morning I made a bold statement of optimism: I folded up the tarp that had been shrouding the exposed ends of my hay bales. If the weatherman is correct, we should enjoy some cloudy—yet dry—weather for at least a week. That ought to be long enough for my boots to drip dry.

I realize that much of the country endures frigid weather from late autumn until spring. One of my horse loving friends from high school, Wendy, moved to Idaho. Each Christmas she sends me a photo documenting how much snow has collected around (and on top of) her barn. She once told me that during winter she has to muck stalls in a snow suit. I keep that in mind when I whine about our recent record rainfalls. But speaking for my fellow Southern Californians, we’re simply not used to real, honest winter weather.

This aversion to wicked winter weather affects the west coast horse world. As an example, for many years wool coolers were traditionally handed out as championship awards at hunter and jumper shows throughout the country. (Coolers are sort of like a snuggly bath robe that drapes over a horse from head to tail). The prized coolers were embroidered with the date and name of the show and the title of the championship. Theoretically, during inclement weather, the honored horse would parade around the showgrounds shielded from raindrops and chilly temperatures thanks to its fancy, emblazoned wool cooler. Only problem is, there isn’t much rotten weather during show season out here. What the heck were we going to do with wool coolers? Horse show managers eventually began giving more appropriate championship awards. But those of us who did accumulate wool coolers had to find uses for them. Some became decorative items displayed on metal hangers outside tack rooms. Others, like mine, were snipped and sewn into throws and blankets and tossed over sofas and bedspreads. My dog, Betsy, is particularly fond of my vintage green wool cooler. 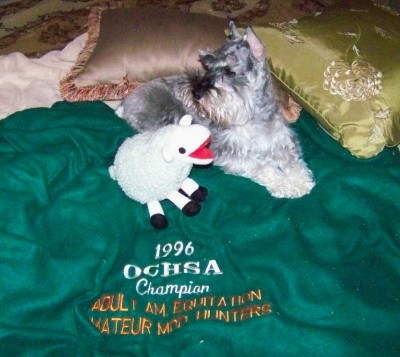 When rampant rainfall does occur, west coast horse people have to work furiously to prevent disaster. During this latest deluge, sand bags became ubiquitous in my horse keeping neighborhood. They were used to prevent barns from flooding. They were stacked like makeshift levees around corrals and arenas. Driving to the feed store meant navigating an obstacle course of sandbags that diverted run-off around sheds filled with pellets and grain. But the sandbags also came in handy on my own street, which is a small cul de sac that creeps up a steep, short hill. When it rains hard, severe erosion threatens the horse trail that meanders past our house and up the street. Huge ruts and crevices open up, poised to strain a suspensory or chip a fetlock joint. The only solution is to place rows of sandbags across the horse trail. Interspersed with straw wattles (which look like sausages made of straw and stuffed into casings of plastic netting), the sandbags contain erosion and prevent an avalanche of horse trail soil from sliding into the street below us. 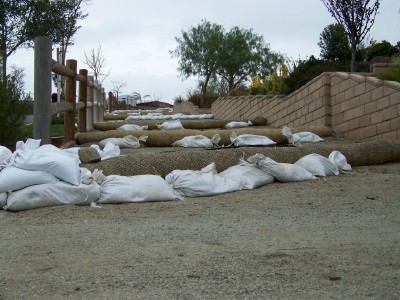 But because the city workers were overwhelmed, my husband, along with our next door neighbor, shoveled sand and filled over 90 sandbags. They were the ones who placed them across the horse trail. It was quite an engineering feat, and it ended up looking like the infrastructure for some kind of elaborate, manmade waterfall. Just to make sure that riders who happened by didn’t find the challenge of negotiating the sandbags and wattles appealing, the city placed an official sign at the trail head, right in front of our house. It’s not like the decree is impeding anyone’s trail riding aspirations. Because our street is a dead-end, the trail is, also. Riding up the hill merely leads to one of the resident’s driveways. Besides, the last thing anyone out here needs to do is attempt to gallop up a steep hill, jumping rows of sandbags that are assembled like army bunkers. 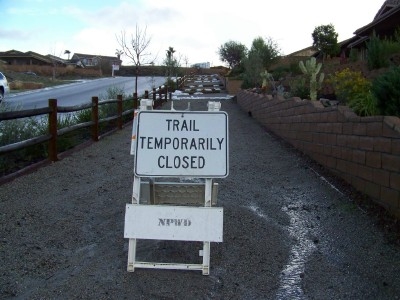 Instead, it’s better to just settle in for the wet winter that’s predicted out here and simply endure. Eventually, spring will arrive with its 80-degree afternoons, cloudless skies and dusty trails. We can handle that kind of weather.