I’m beginning to realize that there are two types of horse owners: Those that adhere to a code of conduct based on both experience and common sense, and those who do not. Observing the goings on in my horsey neighborhood has led me to this conclusion. 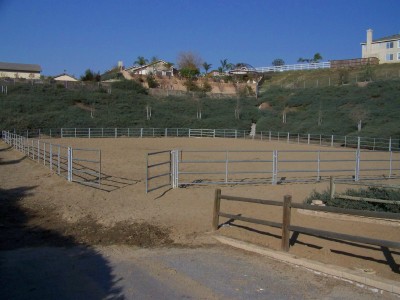 Our horsekeeping town maintains several arenas for public use. One of them is located a few doors down from my house. It’s nestled in a shady basin at the base of a hillside, surrounded by young saplings and native scrub brush. It’s a great place to exercise a fresh horse before hitting the trails, or to school a horse on flatwork between lessons. A couple of times a month I take Joey down there, early in the morning while bunnies are nibbling greenery and quail are hobnobbing through the chaparral. I turn Joey loose to roll and run. Then I tack him up and ride at my leisure. Sometimes I’m down there by myself for an hour, jogging serpentines and loping figure-eights. Other times I might share the arena with a dressage rider, a group of western riders practicing horsemanship patterns, or cowgirls from the high school rodeo team. 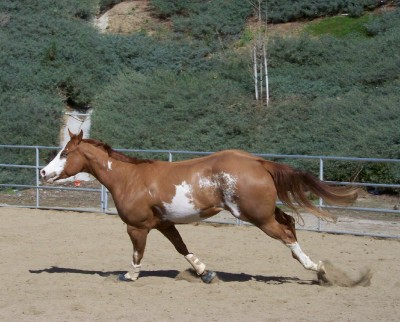 I consider the arena to be a little gem that warrants some respect. It’s constructed of pipe panels that are held together by clasps and bolts. Unfortunately, the posts are not set in cement, so it’s not quite as sturdy as it looks. The snap that holds the gate closed is a little rusty, too, and not fit to bear much stress. How do I know? Because I’m the one who put the snap there two years ago.

Eventually, over time, the arena railing and the immediate surroundings are beginning to show some wear and tear. And in this Spartan economy, there isn’t a slush fund sitting idle, just waiting to be spent on sprucing up a riding arena. Thus I joined with a group of concerned horse owners in my neighborhood. Together we contacted the folks at city hall and explained that something needed to be done before a horse, a human or the public arena itself became permanently damaged. 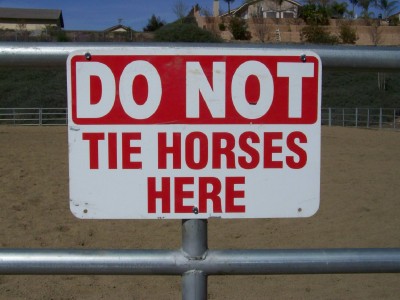 Much to my surprise (was it due to my polished skills of diplomatically pleading?) within days the arena was decked out with numerous signs, a hefty trash can (locked and chained in place) and an authentic hitching post. Next up? The head of the Parks and Recreation Department promised there’d be a sign posted at the in-gate, listing several commonsense rules for behavior. That’s necessary because, as I mentioned at the top of this blog post, there are some horse owners who don’t seem to adhere to a certain code of appropriate conduct. I’m not sure what the rules will actually be, but if I were allowed to stand behind my town’s Official Arena Rules Writer and whisper a few suggestions, here’s what I’d come up with:

Rules for the Neighborhood Arena

I’m anxious to see just what rules do get posted at the arena. Of course, no one is on-site to supervise, which means that the rules are not all that enforceable. And trust me, I’m not a sworn member of the Secret Horse Police. I’m not going to flash a badge and cite someone for an infraction. But at least I can point to a rule and nicely explain that perhaps they should reconsider their actions. Or better, maybe a list of commonsense rules will help educate a horse owner who just simply didn’t know any better.