Where there are horses, there are dogs. You can quote me on that. Most of the time the two species co-exist just fine (who doesn’t love a trusty barn dog?), but then there are times when trouble arises. For example, I’ve had loose dogs chase my horse while I’m trotting down the trail. I’ve also had exuberant terriers provide a noisy play-by-play of my jumping rounds at horse shows. That’s more than a little distracting. So I’m happy to do anything I can to help indoctrinate doggies to horses on good terms.

Wally got to function in this capacity recently. Who’d have thought a big ol’ Paint gelding that once had a reputation for being demonically possessed—at least in the show pen—would end up doing a good deed. But he did!

Our next door neighbors, John and Crystal, are puppy raisers for Guide Dogs for the Blind. Confirmed animal lovers, they got involved with the program to both help out people with disabilities and put to use their considerable dog training skills. Their assignment is to nurture a lovely, sweet-tempered Labrador retriever puppy named Stanford. Hopefully he’ll graduate from a regimented 10-step program and go on to assist a blind person in his or her daily activities.

Although he’s just over a year old, Stanford has already participated in numerous outings that exposed him to all kinds of environments. Each activity helps make him a reliable helpmate and companion for a blind person. Stanford has ridden the Metrolink (the high speed commuter train), taken a ride on a boat, visited restaurants and shopping malls, and toured amusement parks. Yet to bolster his impressive resume, John and Crystal thought it’d be a great idea for Stanford to become comfortable around horses. After all, who knows? There might be a blind person who owns horses, lives on a ranch, or who has a child or grandchild who takes riding lessons. Being used to horses would certainly come in handy. 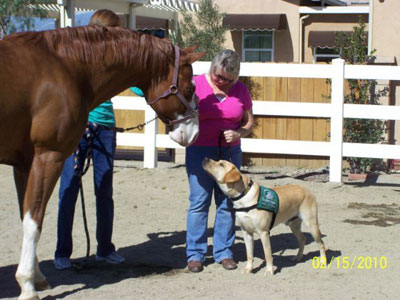 Both of my horses are used to dogs, but I figured Wally was older than Joey and therefore a little more predictable for the Dog Meets Horse outing. So Crystal led Stanford into Wally’s spacious paddock, and I held Wally by the lead rope. First we allowed them to inspect each other. Stanford was curious, because he’d never seen a horse muzzle to muzzle. Wally, though, was less fascinated with Stanford and more intrigued with the yellow dog’s fancy green blanket that proclaimed “Guide Dog in Training.” I think Wally was amazed that horse blankets came in that small of size.

Since neither animal seemed rattled, we then walked them side by side. We circled and made turns, so Stanford could get a true sense of Wally’s size. Then, the final test was when I unsnapped Wally’s lead rope and clucked to him. I explained to Crystal that sometimes a dog’s herding or hunting instinct takes over when they see a horse trotting past them. Yet as Wally jogged around us in a circle, all Stanford did was prick up his ears, as if he were bemused by the rhythmic thud-thud-thud of Wally’s hooves. Other than that, the caramel-colored Lab stayed obediently at Crystal’s side. 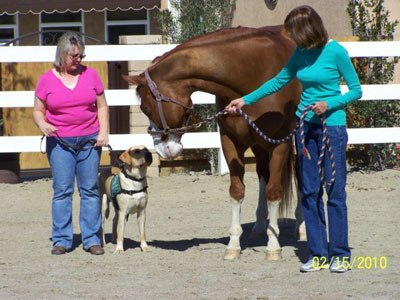 I told Wally, “Whoa,” and then snapped the lead back on to his halter and gave him a pat. He earned a carrot that day for being such a cooperative volunteer. He did some community service and helped out a future guide dog. And sweet little Stanford gets to say (or bark?) that he now knows how to behave like a gentleman around horses.