A little black mare named May has a new home. She almost ended up in my backyard, but thanks to a simple twist of fate she now resides across the street from me. And while I had contemplated adopting her (perhaps spending too much time in contemplation), what’s important is that she found a wonderful home.

What I know of May’s story began late last summer. I had driven to the animal control office to follow up on a welfare complaint I’d filed on an underfed horse. Fortunately, I learned that case was resolved. But I was given a tour of the facility and introduced to the dozen horses stabled there. Each one had either been confiscated by animal control due to neglect or abandoned by their owners. Yes, I said “abandoned.” As in turned loose. Apparently when some folks in our area no longer want their horse they simply ride it to the wilderness area at the riverbed, hop off and walk away, leaving the horse behind. Eventually the horse is discovered by other riders or it wanders onto the city streets. Then animal control becomes the custodian of another unwanted horse. Such was the case with May. Though sweet, sleek and serviceably sound, she was a cast off. Since she was discovered during the month of May that became her official name.

I thought she was darling. She had a soft, kind eye and good basic conformation. She looked like an old foundation Quarter horse with strong hooves and a slightly dished, baby doll face. Her adoption fee was $500. I gave her a pat on the nose and went home, thinking about May for days. I figured I could keep her at my parents’ place and occasionally hop on her bareback and plod around the arena there. Maybe once in a while I’d haul her over to my house and let her commune with Wally for a few days. But winter came and I got busy with other tasks, plus an unexpected vet bill quickly devoured the extra cash I had socked away. May would have to wait.

Then my new neighbors across the street moved in. They’re the quintessential cute family: a mom, dad, and three little kids who all love animals. I knew they planned on getting a horse or two, and that they’d been taking riding lessons, but it surprised me nonetheless when I saw them leading a horse down the street, toward their house, a few weeks ago. I walked toward them, smiling and congratulating them on their four-legged acquisition. As I began to pat the little dark horse they were leading, something seemed familiar. The sweet face, the petite velvet nose, the ebony coat were all reminiscent of a horse I’d patted before.

“Hey, I know this horse!” I exclaimed.

“We adopted her from animal control,” the wife and mom, Allyn, said. “She was a rescue. She’d been abandoned.”

I began to laugh. My relationship with May bubbled forth and I shared how I had spotted her months ago and thought, out of all the unwanted horses at animal control, she was the one I favored most. And now she had a new home, right across the street from me! 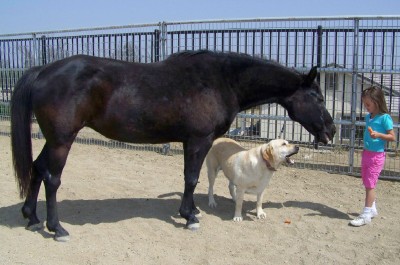 May has a great life where her only concern seems to be competing for carrots with Scout, the family’s Labrador retriever.

Allyn did everything right. She had her riding instructor evaluate May, a wise decision since any horse—even a sweet-faced 20-something senior horse—can have bad habits that make them unsuitable for novices. Once May proved sensible and safe, a vet gave her a health exam and related any issues he discovered. Nothing was serious enough to prevent her from being a backyard pet and babysitter for the kids.

So now little May is living across the street from me. Each day she placidly carries the young daughter, Emily, around town, with Allyn leading the way. May is well fed, has a shady shelter in her large paddock, and gets quality hay and several scoops of senior feed each day. She even has a goat for a companion.

Each time I ride past her aboard Wally I think how wonderful it is that there’s one less unwanted horse in this world. But I’m also considerably peeved at owners who would discard a horse like her. Was she deemed too old? Could she no longer run fast enough to hot rod along the trails? Did the owners simply tire of having a horse to feed? Shame on them. Abandoning a senior mare to fend for herself at the river bottom is a deplorable decision. My only consolation is that May has exacted some sort of revenge. I have faith that she is enjoying a far better life than those who ceased loving her.