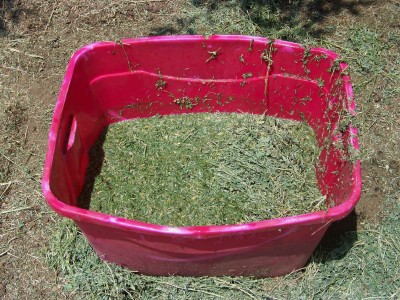 Summertime weather is here and the horses in my life are mocking me. While I’m guzzling water like a camel preparing for a 30-day sojourn across the Sahara, they’re fiddling with their water like kids at a theme park. They splash, they play, they make a mess out of what’s supposed to be their drinking water. I’m worrying about the horses staying hydrated and they’re inventing recipes and creating pool games.

The worst of the bunch is my sister’s horse, Topper. He came from the race track with a mealtime obsession: He dunks his hay into his water tub. Then he happily munches away on the soggy stuff like a hippo eating its way through a swamp. Even if we toss the hay to the far, far corner of his stall he’ll pick it up, one mouthful at a time, stroll over to his water tub, and submerge it. The result is a god-awful alfalfa stew. If the gucky water isn’t dumped after every meal, it ferments and becomes undrinkable. Our only other option is to remove the water tub and replace it with several buckets, hung from the wall. Topper still dunks his hay, but it’s not so much of a mess. Yet when the temps reach triple digits we hate to think he might run low on water. So we surrender to the routine and just deal with it. Regrettably.

The next water wizard is Wally. He’s not a dunker, but he does have a slight overbite. Not only does that mean I have to spend money having his teeth floated twice a year, but it also means that he’s a sloppy eater. He quids, which means some of the food slips out of his mouth due to the misalignment of his teeth. That means his water tub often resembles a kid’s half-eaten bowl of cereal. You know what I mean. There’s the bowl of milk and then there is a handful of waterlogged Cheerios floating on top. Such is Wally’s water, especially if he’s been treated to a scoop of pellets. Naturally, that means I end up changing his water nearly every day.

Finally, I have to deal with Cowboy, my mother’s two-year-old. The lanky palomino youngster sees water as a source of amusement. When bored, he plays Let’s See if This Sinks. He’ll drop his Jolly Ball, fly mask or anything else that was conveniently left within reach of his busy mouth into his water tub. You never know what you might find at the bottom of his water tub. On other occasions he grabs hold of the rim of his tub with his mouth and drags it to the far end of his large paddock. Then he overturns it. And stomps on it. And flips it around like a toy. Once he’s made a mud puddle, he invariably rolls in the slop, which sort of adds a final touch of panache to the entire melee.

I know, you’re probably wondering why I don’t break down and install automatic waterers. Been there, done that. Wally has proven he can destroy virtually every style on the market. It’s like he waits until dark then opens up his tool box and goes to work, dismantling the contraption before dawn. Topper, on the other hand, stays awake all night using the automatic waterer as a fountain. Or as a spa. When he was boarded at our trainer’s while he was competing on the show circuit, the automatic waterer in his stall had to be disconnected. Why? Because he repeatedly flooded his stall. So then our trainer put a water tub in his stall. And then he began dunking his hay. Which meant the water had to be dumped and changed each day. See how the madness continues?

I guess there could be worse stable management concerns than worrying about clean, fresh water. Yet each time I reach into the refrigerator for my lime-flavored bottle of water, I can’t help but wonder, “So what have the ‘chefs’ been cooking up outside in their water?”