If you’ve been following my blog then you’re familiar with my mom’s palomino youngster, Cowboy. He’s about 2 ½ years old now, and while I’ve dinked around with him quite a bit over the last year, it’s time to get serious. 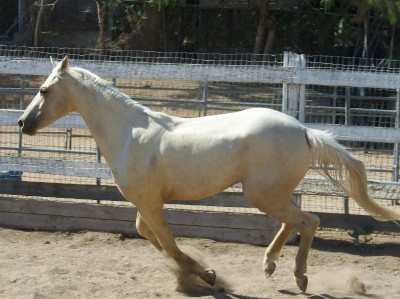 Like all the babies my sister Jill and I started in the past, when we were raising Thoroughbreds and warmbloods, Cowboy’s education has followed a fairly regimented program. We want him to understand from an early age that there are certain expectations for him. He already ties, loads and hauls quietly. I’ve also ponied him all over town. The only thing left before he’s actually saddle broke is perfecting his long-lining skills. That’s not a job I approach nonchalantly. Any time you combine a strong young horse with long lengths of rope there’s potential for all kinds of calamitous scenarios. 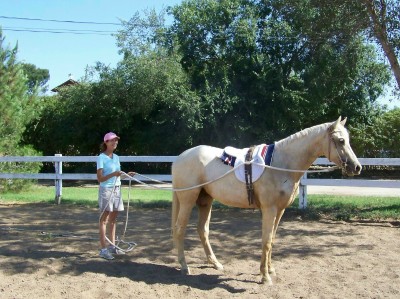 Long-lining has its unpleasant aspects. It’s referred to as “dirt skiing” for a reason.

But if it’s just another step in a thoughtful training program, long-lining is usually uneventful. And, in my mind, it’s invaluable. Long-lining teaches the greenie to stop, turn, back up, circle and move forward on command. But even though I’m a big fan of long-lining greenies before starting them under saddle, I’m well aware of the unpleasant side of the process. For example, there’s the dust. As I walk behind Cowboy the dust billows up in my face like exhaust from a city bus. Then, I often have moments where I feel slightly disoriented. It’s not because I’m suffering from vertigo. It’s because Cowboy, like all babies, initially has difficulty walking in a straight line when a person is at the helm. It’s like he’s a little tipsy. Luckily he catches on quickly and begins to rely on cues from the lines, otherwise I’d get dizzy. Finally, I have to be aware of when enough is enough. Greenies eventually catch on that the human is merely walking behind them (or slightly off to one side), and that if they really, truly wanted to just lean on the bit and, you know, take off at a gallop back to the barn, they could. At this point, however, Cowboy is being a model student and I don’t think that idea has occurred to him. Yet. And I’d like to keep it that way. 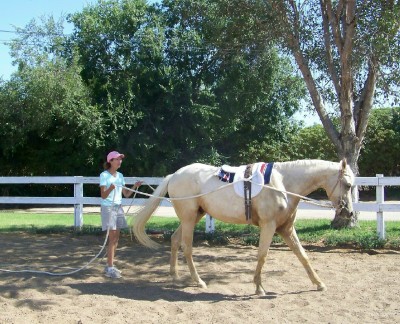 I could make the most of Cowboy’s willing disposition and invest in a cart. Or a plow.

After a few more sessions of long-lining, Cowboy will move on to wearing a lightweight western saddle. Once he’s been long-lined a few times in that, it’ll be time for one of the local colt-starting specialists to hop aboard. I’ll keep you up to date on that saga. In the meantime, though, I’ll keep working on the lanky palomino. I really think he has a future as a sport horse: he moves a lot like his dam, a warmblood mare of mostly Trakehner bloodlines. He’s also naturally well balanced. If he happens to pick up the wrong lead on the longe line he swaps immediately to the correct one on his own, which in the hunter/jumper world is seen as a good sign. So if I had a crystal ball I’d predict that he’ll eventually be someone’s colorful mount for amateur hunters, three-day eventing or lower level jumpers. Yet he seems perfectly happy long-lining. Perhaps we should harness him to a snazzy two-wheeled cart. Or maybe a plow. He’d look mighty fancy tugging a farming implement behind his ivory colored tail.