Most of my single horsey gal pals have given Internet dating a whirl. Thankfully I am hunkered down in a marriage, because I can barely deal with email. I can’t imagine what I’d wind up with if I trolled online for a guy who didn’t mind shoveling horse poop. Even scarier, in my viewpoint, is buying a horse online, particularly one you haven’t viewed in person. But apparently lots of folks do just that.

My own sister, Jill, did it. About six years ago she struck up a conversation (online, of course) with some of the kindhearted souls who run CANTER. It’s an organization that matches up Thoroughbred race horses on the brink of retirement with potential buyers. Despite my very vocal misgivings, Jill fell in love with the online photos of a flashy gelding named Rusty Gun. Through CANTER, Jill contacted Rusty Gun’s trainer at the track and asked about the horse’s soundness, trainability and temperament. Nothing set off any alarms. He was lightly raced, serviceably sound and easy to handle. When the trainer added, “This horse has got a lot of personality,” my sister was sold. She’s always had a soft spot for quirky horses.

In a few days Rusty Gun (who would later be re-christened “Topper”) was hauled all the way from his home in Michigan to Turf Paradise, a race track outside Phoenix. Once Jill got a phone call that he had arrived, she hitched up our trailer and headed to Arizona. When she came back with the horse in tow I was very nervous. What had she brought back with her? She let the ramp down and out walked a lanky red gelding that closely resembled his distant relative, Secretariat. An added bonus? He took one look around the place, stared for a moment at the barn, the arena, the goat, the dogs, and then went, “Oh look! Grass!”

From the start he was a pure joy. Seriously, in 90 days he was winning ribbons in baby green hunter classes.

Unfortunately, not everyone who is bold enough to buy a horse online realizes such a happy ending. One of my former neighbors bought what was supposed to be a fantastic dressage prospect: a warmblood (of sorts) that was destined to reach well over 16-hands (supposedly). Instead, what arrived on the van was a very small, short-strided youngster that looked like a miniature mascot for the Budweiser Clydesdale hitch. Though she was clearly dismayed, she never pursued any recourse, fearing it’d cost her even more grief and more money in legal fees. Besides, she kind of liked the little guy, after all, even if he was going to end up being a trail horse rather than her next FEI contender.

There have been other cases of online horse sales gone wrong, but none have been as alarming as the recent case of Trina Kenney, who lives not that far from my neck of the woods, at the foot of my local mountain range. Here’s an abbreviated excerpt from the Victorville Daily Press:

Trina Lee Kenney, 32, of Wrightwood… agreed to plead guilty to mail fraud for defrauding at least 61 people in 23 states and Canada…Kenney reportedly advertised horses on various Internet sites, but the ads made false claims about the horses’ breeds, pedigrees and organizational affiliations. She also made false claims about physical characteristics, abilities, temperaments and health of horses, a news release from the U.S. Attorney’s office stated… Kenney admitted that she lied by claiming horses she sold were safe for children and beginners. Kenney said she drugged a horse to make it appear docile during a victim’s examination of the horse, and that she had painted at least two horses to make them appear black rather than brown. Kenney further acknowledged that various horses she delivered were starved or sick, the news release stated.

Kenney’s scam might’ve continued even longer except she made the mistake of selling a horse that didn’t exist for $5,000 to an undercover FBI agent. Oops.

Now, I freely admit that I’ve ventured onto online horse sale sites. I’ve even broadened my search criteria to include shopping for horses outside my state. But when it comes to actually paying for a horse that I can’t actually ride, I get cold feet. There’s something special about picking up the reins and actually communicating with the horse I’m considering buying. I want to know its gaits. I want to see if it responds to my cues. I want to know that I have a connection to it, that I can achieve that almost ethereal bond that’s so important between horse and human.

I guess my point is that if you’re going to shop online, do it wisely. Things could turn out wonderfully or you could be horribly disappointed. And that goes for both horses and men that you find on the Internet. 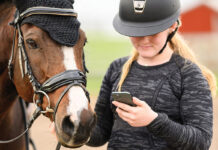 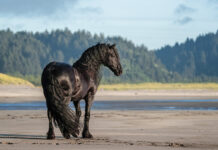