My favorite season is autumn. I like the way the orange hues of pumpkins complement the summer’s final yield of blue-green hay. Autumn is also a time for contemplation. Will my riding goals be different next year? How has my relationship with horses evolved over the past few months? Am I ever going to get around to going horse camping, or will I just keep staring at the brochures? 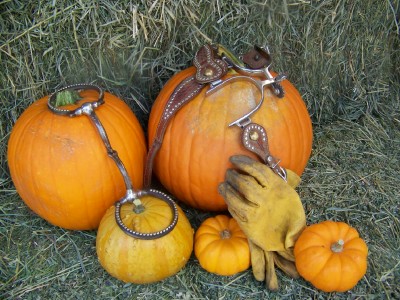 And since Halloween is here, I also contemplate this age-old question: If my favorite horse was dressing up for trick-or-treating, what would he wear?

I’ve heard it said that a costume represents one of two things. Either it signifies your alter ego (what you truly believe you are, personality-wise) or the fantasy version of your self-image. I suppose that’s why my Halloween costumes over the years have stuck to familiar themes: cowgirl, race horse jockey or… princess. I know. That last one really makes you laugh, right?

Of course there was the one year I was working as a hostess at a fancy Newport Beach dinner house. On Halloween we all dressed in costume. I decided to become a scarecrow and stuffed my plaid shirt and over-sized pants with hay straight from the feed room at my parents’ barn. The restaurant manager wasn’t pleased with me. I left a trail of tiny green sticks and emerald leaves wherever I went.

When it comes to horses choosing their Halloween costumes—let’s pretend they could—I think Wally would dress as a gangster. Or maybe as some kind of special ops soldier, complete with dark camouflage and assorted weaponry. Both suit his tough guy persona. And then, since not much excites Wally other than food, I imagine he’d approach the houses (or stalls) on his trick-or-treat run and not ask but demand some candy.

“Hey lady,” he’d snort through flared nostrils, “dump the candy corn in the feed bag and no one will get hurt.”

While I may be a little over-the-top in imagining a horse in a costume, I actually did put a dog in a costume for some Halloween festivities. My sister’s Jack Russell terrier, Snowden, modeled my masquerade fare for a couple of pet costume parades this month. As a confirmed ranch dog, Snowden has perfected all the characteristics of a JRT. Namely he barks, he yaps, he hunts, he digs, he chases and he gets dirty. Sometimes all at once. So trying to design a costume that reflected his temperament (and that would withstand his activity level) presented a challenge. Ultimately I decided to combine Snowden’s “love” of the local barn kitty community with the concept of a saddle and riding. My sister Jill and I scoured the craft stores until we found just the right shape of foam carving pumpkin. Then we shopped for a black and white stuffed cat. With the addition of some faux autumn leaves, a handful of green pipe cleaners, a spool of pretty ribbon and the use of a hot glue gun we made just the right outfit. Snowden sported a pumpkin saddle with a cat wired in place so that it perched upright on his back. The cat held a pair of reins attached to Snowden’s bridle (made of pipe cleaners) and held a sign that read: “JACK-o-lantern rides. 5 cents.” The final embellishment was a tiny pumpkin hat that Snowden wore tied atop his furry head. 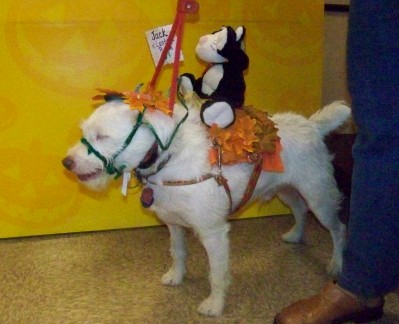 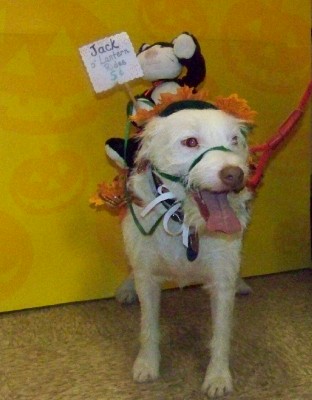 Snowden was quite a hit at his pet parades. The event at our local PetSmart, however, was especially memorable. Snowden was in line right behind a trio of alpacas. Yes, that’s right. Alpacas. As in small llama-like creatures. And one of them was dressed up like a giraffe. Needless to say, situating a Jack Russell terrier—one who’s perfected the art of tracking prey in competition—next to several alpacas is not conducive to maintaining a serene environment. I never heard such histrionic yelping in my life!

As Snowden whirled and twirled around, trying desperately to corral and command the alpacas, the black and white kitty straddling his back ducked and spun like a rodeo rider. Five cents a ride indeed! That cat was getting the ride of his life!

At the end of the costumed event, Snowden came home with yet another prize. Of course, nothing could compare to the treat I got from watching the entire calamitous event. Between the wily ranch dogs, the quirky horses, the palette of colors and the sense of inner peace, autumn is always welcomed into my life with horses. Yup, it’s a happy day when Halloween comes to the horse world.