Already I feel like I’ve owned Danny for a long time. I have a sense of serenity when I’m around him, much like I enjoy with Wally. Yet the first 48 hours that Danny was in my possession provided some startling revelations.

As soon as he arrived at my house I went to work doctoring the scabs that dotted his skin. Besides his fly allergy he had a bad case of scratches (a combination bacterial and fungal infection) on his lower legs. After I’d washed his legs with Betadine soap I dried them off and then slathered them with Furacin ointment. While I was wrapping his legs I just happened to glance up at his belly and saw a big glob of yellow stuff dripping from the back end of his sheath.

What the heck was that?

I soaped up my sponge and washed that entire area and hoped it looked better in the morning. But it didn’t.

Yet since I had Danny on a trial basis, and he didn’t seem the least bit bothered by whatever was going on between his hind legs, I tacked him up and went for a long ride. Even though he was a stranger to the trails in my town, he strolled along confidently. When I got home I called my vet, Jennifer, and asked her to come by and give me her opinion. Assured that he was not suffering from any major defects of sight or soundness, I motioned toward the draining goo. After a brief moment of analysis, Jennifer turned to me and said matter-of-factly, “That’s from being gelded.”

She explained that the symptoms were unmistakable: Danny hadn’t healed properly from being castrated and there was an infection. The drainage was oozing from a narrow tract that led from the pocket of pus to the outside.

Not only was the infection diagnosis troubling, but I believed I had purchased an 11-year-old gelding, not a recently castrated stallion. I immediately called the woman who had acted as the agent for the previous owners. I explained, in rather anxious tones, that my vet was standing next to me, convinced that Danny was suffering from a castration-gone-wrong.

“Yes, he was gelded five months ago,” was the response.

I was speechless. I just handed the phone to Jennifer and she carried on a conversation punctuated by lots of “Aha’s!”

When Jennifer hung up she explained my options. Danny needed surgery to re-open the site and drain out the infection. “Of course,” Jennifer said, “since you have the horse on trial, and it wasn’t disclosed that he was only recently gelded, and this is going to cost you several hundred dollars to fix, I want you to really think about this. You could just send him back.”

My stomach was churning. I felt so horribly conflicted. Yet I stood there and looked at the poor horse. For five months he’d been suffering from a walled-off infection that no one had discovered, much less treated. How could I send him back?

“I really like this horse,” I said. “Plus I feel sorry for him.”

Apparently I suffer from the curse of soft-hearted horse lovers everywhere. And that affliction could mean only one thing: I was about to spend a fistful of money I hadn’t planned on spending.

Jennifer sedated Danny and then prepared to do some exploration of the oozing area. Her assistant, Mark, held the thoroughly compliant Paint. 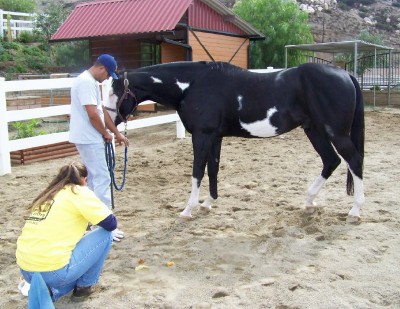 But once she opened up the area, there was very little pus. Yet she could still feel a hard, thickened area. She used a hemostat, which is a narrow, long-handled surgical instrument shaped like scissors with tiny clamps on the tips, and went hunting for whatever was sequestered in the tissue. It didn’t take long before she revealed what she found. “Wow, look at this!” she said, and held forth a small wad of gauze soaked with blood, fluid and a small amount of pus. “This has been in there all this time!” She seemed quite intrigued by her discovery, almost like she’d found buried treasure. 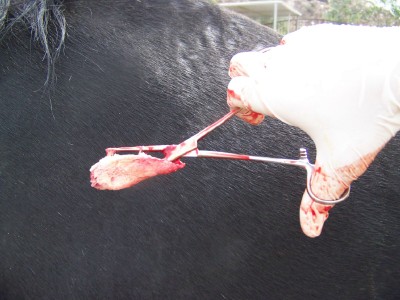 She finished up by flushing out the surgical site and then gave Danny a full set of vaccinations, including a tetanus booster. 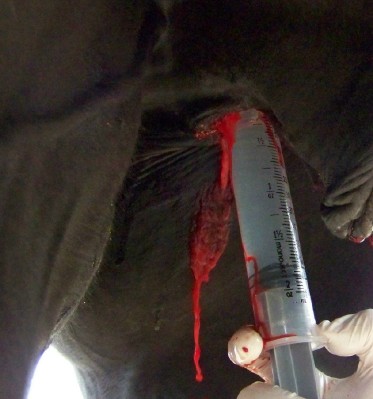 Why had the vet who performed the castration left behind some gauze packing? Who knows. But Danny’s body had healed around it, except for a very small opening. The gauze could never have been expelled through that tiny channel. It would’ve remained a source of infection until… well, until someone like me happened to do a thorough inspection of his underside.

I was relieved when Jennifer told me that Danny would recover just fine, though he’d have to stay on antibiotics until the wound healed. But I was still reeling from the fact that I now owned a recently gelded mature stallion. After Jennifer left I made another phone call to the gal at the ranch.

“I just didn’t think it mattered,” she explained. “As far as I know he was never bred.” Then she added, “I told his owners they had to geld him before I’d present him for sale, and they did. He came here right after and I had him turned out in pasture with a bunch of other horses and he never so much as neighed at them.”

Indeed, Danny’s demeanor was totally unlike the swaggering, puffed up sport horse stallions I had ridden and handled when I was competing. Plus, my neighbor a few doors down had an older Quarter horse stallion, and he was an absolute doll to be around both on the show circuit and on the trails. Maybe Danny’s sexual past wasn’t anything to worry about.

The next morning, though, my curiosity got the best of me and I called the American Paint Horse Association and asked them to look up Danny’s registration history. Guess what? He has a dozen registered Paint foals. So much for his never being a breeding stallion. Though I was still determined to keep him, I was beginning to wonder what else lurked in the background of the 16-hand horse in my backyard. So I called the ranch yet again. I was a little more demanding this time around, and I was promised that Danny’s previous owner would call me so I could get his history firsthand.

Thankfully, that went well. I found out quite a bit. In an odd twist of fate, he’d spent some time in a well-known hunter trainer’s barn, a professional on the A-circuit whose wife was once one of my fellow competitors (and an arch rival during my junior years). When Danny had proven to have less than spectacular style over fences he was sold inexpensively to his most recent owner, the husband and wife duo. There he’d not only been ridden on the trails, but he’d also served as a pack horse in the mountains and had even been used in the sport of cowboy mounted shooting. No wonder he was so dependable on the trails!

So you see, this story has a happy ending. I’m having fun riding Danny in the arena, alternating between English and western tack, and riding him on the trails. I’ve taken him on some extended rides with mares, including with my friend Barbara’s coquettish young Trakehner. Danny is always a perfect gentleman. Despite the surprises, I truly think he was meant to end up in my care.