Remember how I said I’d body clipped Danny? I meant that literally. I clipped his body. The top of his head and his ears? Not so much. He was shiny and sleek all the way up his neck and then… poof! A forest of fuzz stood just south of his ears and encircled his bridle path. When I rode him it was like staring at the back of a coal black Easter bunny. 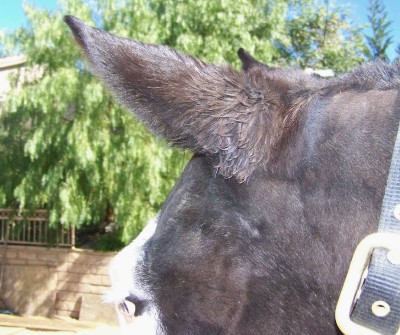 You can’t quite comprehend the entire Easter bunny effect in this photo, but trust me, there’s a hatful of hair there.

Why was my clip job so crummy? Because Danny came to me fully accessorized with passive-aggressive tactics. One, for example, is telescoping his swan-like neck until his head is beyond the reach of the human hand, especially a hand holding a set of clippers. Since my right arm is weak and lacks the full range of motion, I had no choice but to stop clipping, and that left Danny wearing a fuzz bonnet. I’m sure he was delighted with his sense of victory.

Honestly, the clipping episode didn’t surprise me. Soon after I bought Danny, his previous owner called and apologized in advance for his “pushy ground manners.” I’m not sure what dire doings Danny did at his other home, but with me his bad manners haven’t amounted to much. Sure, sometimes he’ll plant his feet on the way to the wash rack (he’s not big on baths) or shuffle around at the hitching post as if he’s auditioning for the equine version of Dancing with the Stars. But none of these demonstrations impress me much. After all, I also own Wally, who envisions himself as the master of bullying and intimidation.

So needless to say, Danny may have temporarily won the clipping battle, but he wasn’t going to win the war. I called my sister, Jill, and said I needed her assistance.

“Danny is using all 16-plus hands of his height to his advantage,” I said. “You need to help me explain to him that hair hats are so last season and that he really doesn’t want to traipse around town looking like a fashion misfit.

Always up for a challenge, and being a great sister as well, she drove over in a few minutes. I had the extension cord plugged in and the clippers ready by the time she arrived. Danny was going to lose his hair hat, whether he wanted to or not.

Just as I expected, as soon as Danny realized that he was outwitted and outmatched, he gave up. Though I had a twitch on stand-by and a stud chain at the ready, all it took was a second person to hold him firmly so I could hop up on the step-stool. With Jill assuming a no-nonsense stance, and me (and the clippers) now in the same stratosphere, Danny had two choices: Push the issue and start a rodeo or stand still and behave. It took him about three seconds to decide. 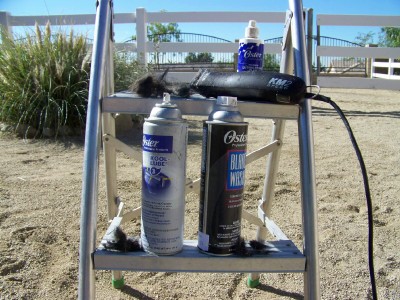 Danny met his match once my sister arrived and the step-stool was put into service.

The anti-climactic resolution could be because somewhere, back in his early training, he was taught that it’s far, far better to simply let the humans do their thing. Or he could be so lazy that he figured it wasn’t worth the energy to put up a fight. Then again, maybe his underlying sweet disposition just wouldn’t allow him to be nasty. Regardless, there’s one less horse wearing a hair hat these days.