A few years ago I participated in an online forum where horsewomen were discussing what they’d like to receive for Valentine’s Day. The most memorable contribution came from someone named Horseygal2, who lived on a small farm in Virginia. She wrote, “Nothing says ‘I love you’ like a tractor.” 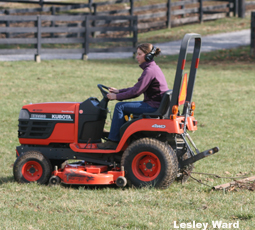 I’m not sure if Horseygal2 ever got a tractor from her beau. But I do know that as Valentine’s Day rolls around again there are a lot of unattached horsey gals hunting for a man. And it doesn’t even have to be a man with a tractor. As I’ve written before on this blog, it seems there is a shortage of guys out there who are willing to compete for a woman’s affection with an animal that outweighs them by 800 pounds. But rare as they are, I think I know where they all congregate, and it’s not at the local tack shop or feed store. Nope, in this technologically advanced era the place to meet a horse-loving dream date is online. Shopping for a man is just as simple as shopping for your next horse!

Since I am happily married—honest—I conducted some “research” (okay, I trolled) at equestriansingles.net by typing in some very broad criteria. For example, the men needed to be between 30 and 65 and still breathing. I waited a mere 50.3 seconds before being presented with a stable full of available men. There were scads of them, everywhere from British Columbia to Australia and even farther away, like Tennessee.

Each of my prospective mates came trotting out with their own page, complete with stats on income, education, marital status, and the important things, like how many horses they owned and what type of riding they enjoyed most. Then, much like any other stallion ad, there was a picture. Sometimes this would be a perfectly posed photo of Man on Horseback. Other times it was a fuzzy image from a cellphone depicting Man with Beer Bottle or, even more peculiar, a triumphant image of Man with Rifle Standing over Dead Wildebeest.

But most revealing were the personal descriptions, the part where each man got a chance to neigh about his positive traits and what he was looking for in a potential partner. Here is just a sampling of what some of them wrote, keeping in mind that I selected the ones best fitting the purpose of this blog, which is to both enlighten and entertain (with a big emphasis on “entertain”).

When it comes to favorite pastimes besides horseback riding, one guy professed his affection for his Border Collies: “I love them dogs.”

Another shared his passion for riding: “I’ll ride most anything with hair.”

And while we’re on the subject of hair, one man crowed about his attributes: “I still have my hair and teeth.”

Yet these aren’t just a bunch of guys who spend time with horses. They have other interests, too. One said, “I write sci-fi/fantasy with a western flare.” (Yes, he wrote “flare” not “flair” so I’m thinking maybe he has some kind of flame-powered pen shaped like a six-shooter?)

And, like all of us, they know what they want in a mate: “If you’re a cowgirl you need to still be feminine. Brand calves in the day and wear high heels at night.”

But I began to wonder just how much some of these supposedly horsey men truly know about horsey women, because one man wrote in very clear terms that his ideal woman “should be a mom TO ME… She should support MY INTERESTS.”

Unfortunately, broken hearts and bad romances have affected us all, including this forlorn fellow: “I’ve taken a few stompins from bulls and can still take them from horses but I’m tired of taking them from women.”

Yet they are prepared for dating disasters, if you believe this self-described rancher: “If a gal doesn’t act nice, she’ll be turned out without a blanket.”

Yes, Valentine’s Day is here, and it’s going to be stompin’ on some of us, that’s for sure. But rather than searching for unconditional, enduring love on a matchmaking site, I suggest finding it on the other side of the stall door or pasture gate.