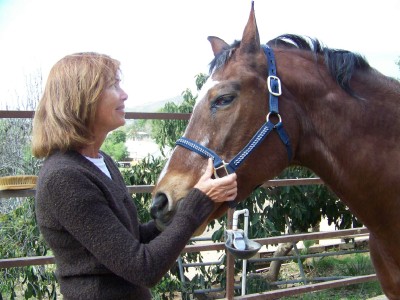 I haven’t visited Ziggy in a long time, but I’d like to think he remembers me.

Few horses have been a part of my life as much as Ziggy, a 16-hand Appaloosa/Trakehner-cross gelding. That’s quite a statement considering he isn’t mine. But I have known him literally since the day he was foaled. And now, very soon, he’ll celebrate his 26th birthday.

Ziggy belongs to Debbie, a close friend of my sister and me. Ziggy owes his existence to his dam, a big, gutsy snowflake Appaloosa mare that my sister picked out for Debbie as her first show hunter. I know, flashy Appaloosas aren’t usually what you think of when you envision a hunter, but Josey had a huge stride and jumped with fabulous style. Once Josey’s career was over, Debbie bred her to a pretty Trakehner stallion, and thus Ziggy came to be.

Though he didn’t arrive with a spotted coat, he is flashy nonetheless. His coppery bay coat is accented by silver frosting throughout his mane and tail, and his blazed face has the Arabian profile of his sire. But what made Ziggy unforgettable from the get-go was his disposition. I’ve always thought that the recipe of combining the sensitivity and intelligence of the Trakehner with the stoic determination of the Appaloosa is to blame. Or thank, depending on your perspective. From the moment he was started under saddle, Ziggy was spirited, unfocused, confrontational and easily bored. But he was also athletic, courageous, trustworthy and incredibly hardy. You could not tire him out and he was never unsound. These characteristics made him a little tough to ride in upper level hunter competition, but he was a blast to ride in pretty much any other situation. He found dressage worthy of his concentration and cross-country jumping the epitome of Fun for Horses.

Needless to say, Ziggy wasn’t the perfect mount for Debbie, but he was the perfect match for me. Over the years I showed him in the jumper division and in sport horse performance classes. I also used him as my horse for an all-Trakehner drill team, where our group dressed up in costumes and did synchronized jumping patterns to music. It was orchestrated craziness, but Ziggy adored it. Then there was the time I rode him in a real hunter trial, where I was matched with another rider and the two of us zipped around a cross-country course against the clock. Though Ziggy and I were total novices in the world of eventing and fox hunting, he was the horse who took every one of the jumps, including a huge stone wall and a fully dressed picnic table set with plates and silverware. I never had time to hesitate, because Ziggy was galloping down to every obstacle with or without me.

But my most memorable Ziggy moment was the time, at least 15 years ago, when Debbie took him to a multi-day show held at the Del Mar racetrack. I was going to ride him in several classes, and Ziggy was stabled in one of the huge, cement-block barns along the backstretch. Debbie had warned me over and over again not to turn my back on Ziggy while he was in the stall, not because he’d kick or bite me, but because he was an escape artist. If the door was left open even a crack, or not snapped shut, he’d wait until just the right opportunity and then leave. At a dead run. I suppose to some extent that I didn’t believe Debbie; that maybe she was just being overly-concerned about her horse. But no. One evening, after my class, I ducked into this stall to readjust his blanket and zoom! Out he went, tearing off down the barn aisle and racing around the corner into oblivion. There were rows and rows of barns, and trying to find the wily bay horse was like tracking down a fugitive. Just when I’d catch a glimpse of him, he’d see me and dart off in another direction. Soon the entire showgrounds was looking for him, trainers, show staff, other riders and horse show moms. It was like a mass hunt for an escaped prisoner. Finally one of the grooms rode past us on a bicycle and pointed to where Ziggy was hanging out. Armed with feed buckets and lead ropes, we finally cornered him and took him back to his stall. But I’m sure Ziggy simply let us catch him, and only because he was done with his tour.

Over the years Ziggy has lost most of his sight. He developed severe cataracts, and Debbie had surgery performed, but it wasn’t successful. So he picks his way carefully around his backyard stable, seemingly counting his steps to the turnout paddock, and knowing just where to stick his head to reach the grass growing outside the fence. Yet don’t let his equine senior citizen status fool you. He still tries to grab the lead rope before you put his halter on. He still nips at you whenever you try to pet him. There’s still a bit of a prance to his gait and yes, he still tries to bolt out the stall door. Despite being blind and nearly 26 years old, Ziggy is still, well, Ziggy. And I hope people will say the same about me when I get old: that my personality hasn’t changed and that I still have a mischievous twinkle in my eye. 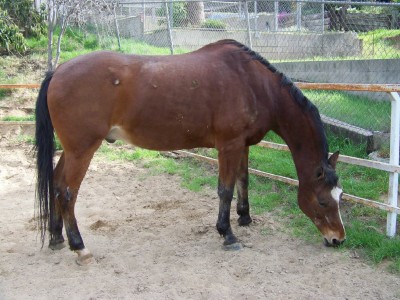 Even though he’s a pasture pet, Ziggy is still a wily spirit.