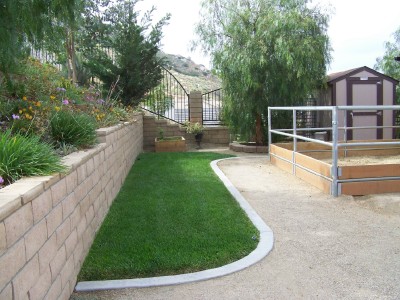 In defiance of Horsekeeping Logic, my husband planted a tiny sliver of manicured meadow just outside the corral fence.

I’ve learned there are certain secrets a horsewoman should keep from her non-horsey husband for fear of sending him into a tizzy of apprehension and dread. One is the date of the upcoming sale at the local tack store. Another is the advent of the vet’s truck sitting in our driveway. But the thing that drives my husband into a tailspin of turmoil is this: Wally getting loose and eating the grass.

You see, my husband has never accepted that one cannot seamlessly meld horsekeeping with landscaping. He continues to hold on to the dream that mankind can, indeed, house equines in close proximity to lush sod without incurring any consequences. He doesn’t get that putting what surely looks like a finely trimmed miniature meadow smack dab in front of Wally’s face is like dangling a slab of sirloin before a lion. Something, eventually, is going to be eaten. It’s just a matter of when.

You’ll notice I keep invoking Wally’s name here and not Danny’s. That could be because Danny is so dull he hasn’t yet noticed the strips of lawn intersecting our backyard stable. But it’s probably because he’s not conniving enough to figure out how to unlatch a gate and then bolt directly to the grass and begin munching. That’s what Wally does. I swear, if I do not use a snap plus a stud chain wrapped around the gate latch, Wally notices. He doesn’t make a big deal out of it at first. He just slowly moseys over to the gate and then suddenly flips the latch up with his upper lip (it functions like a thumb at the end of his nose), mouths the snap open, and then charges straight to the mini-meadow. 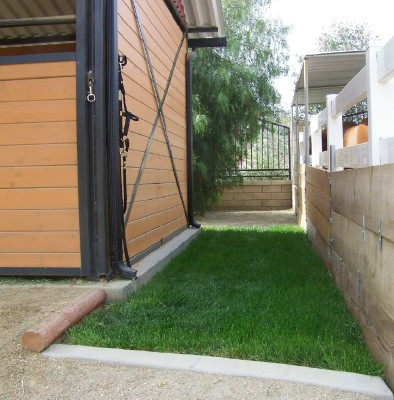 There’s another strip of emerald bliss next to the box stall, forever tempting my horses’ taste buds.

It’s amazing how much damage a fat Paint gelding can do in just a few bites. Since he knows he’s going to be apprehended he gobbles it up in frothy mouthfuls, eating as he trots, a motion which also rips out huge chunks of sod. I am able to describe this scenario so clearly because it’s happened twice.

Well, three times. But the last time I kept it a secret from my husband Ron.

The first two times Ron was so upset that I was half afraid Wally and I were going to be hitchhiking our way to the nearest boarding stable with a bunkhouse. Ron also contemplated tearing out the whole lawn and starting over again. But fortunately he simmered down, I promised to keep a closer eye on Wally and the gate, and the grass grew back in place.

Yet like I said, it happened again. Last week. Honestly, I had just wheeled the muck cart into Wally’s paddock when the fat red horse snuck behind me and in one quick move flipped the latch on the gate and darted out. He went right to the strip of lawn next to the barn and began eating. He got a few mouthfuls before I caught him and dragged him back into captivity, but the damage was done. Several green tufts were sticking up in the air like little bouquets and horse shoe prints were indelibly stamped into the soft earth.

After I put Wally away (do horses snicker?) I got down on my hands and knees and began pushing roots back into the dirt. I kept consoling myself by thinking, “Hey, I’ve watched tons of show jumping classes held on grass derby fields. All that grass grows back in, right?” Emboldened with such faith, I added a few handfuls of bagged soil from the garden shed and watered it all in heavily. Because, you know, dousing everything planted in the ground with water makes it magically all better. Sure.

I did everything possible to keep Ron from venturing out to the backyard barn for several days. Meanwhile, I’d stand over that section of lawn and coax it to grow. Mentally, I’d wish it to sprout new shoots and flourish.

By yesterday I was convinced that every smattering of evidence from Wally’s incursion was gone. The grass was green and fluffy and the hoof prints had disappeared. I was confident that my unavoidable date with destiny would be alright. Right around noon, about the time the morning dew had evaporated, Ron walked out to the garden shed and fired up the lawn mower. Once I heard it humming away I was relieved. Victory! And then…. It stopped. Pause. Silence. I could hear birds chirping, it was so still.

Then, the sound of Ron’s voice above the springtime melody: “Cindy? Did Wally get out again?”

I thought furiously. Should I ask him to define “again”?

He repeated, calling over the fence, “Did Wally get out again? Did he get on the lawn?”

“No,” I said, adding a little flourish of puzzlement to the tone of my voice, “not since the last time.”

Of course I wasn’t about to define what I meant by “since the last time.” It’ll be just another little secret.

Another few seconds past, then the lawn mower started up again. And all was well with the world once more.