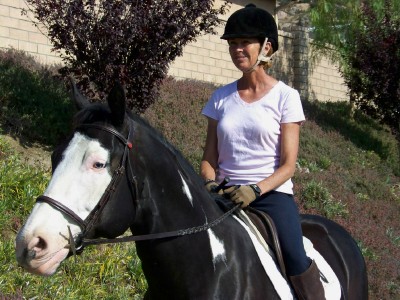 Danny and I head down the trail again for our Wednesday crossrails and chit-chat club.

Most people look forward to the weekends. I look forward to Wednesdays. That’s the day I tack up Danny in his hunt seat saddle and bridle, strap on my old velvet show helmet and ride a few blocks to the stable where my friend, Debbie, boards her ex-show horse. She and I ride together for an hour or so, spending just as much time on girl talk as we do on practicing our horsemanship.

Don’t get me wrong. In between sharing the latest local gossip and comparing how our respective husbands have either perplexed or annoyed us, we work our horses. Debbie’s flashy Thoroughbred, Rainy, had a stellar career in the show ring and once Deb gets him in the groove he stretches down on the bit and cruises around like he’s competing in a flat class. Danny, on the other hand, has only recently perfected the art of traveling in a straight line. When I bought him it required an Act of God to get him to pick up the left lead, he was so crooked. So I spend most of my Wednesday flatwork on simple basics like transitions, circles and simple and flying lead changes.

Needless to say, Debbie and I aren’t kids anymore. The culmination of decades spent on the back of a horse, plus the wear and tear of life, has left both of us battered. Debbie has recently recovered from knee replacement surgery and also suffers from chronic arthritis. I guess I don’t have to list all of my health problems. Fortunately, Rainy and Danny have tons of mileage on their odometers. Like a couple of vintage sedans, they suit us just fine.

A couple of Wednesdays ago I told Debbie, “We’re a couple of middle-aged women riding our creaky geldings.”

“What’s wrong with that?” she replied.

Of course, Debbie and I both have a bit of daredevil still left in us. (Maybe that’s the last thing to go?) So when we finish our flatwork we size up the jumps in the arena. As of yet we haven’t gotten beyond a few crossrails, some flower boxes and a small white panel. Debbie will freely admit that’s because she’s still ruminating over the fact that she fell off and suffered a concussion while trotting Rainy over a series of cavaletti a couple of months ago.

Remind her of it and she’ll say in her sing-song voice, “I still can’t figure out how that happened.”

My excuse? I’m mounted on a tall gelding with a big, loopy stride like a giraffe. And even though he came with an armful of accolades from the seller, including the enthusiastically delivered proclamation, “He’ll jump anything you point him at,” I’m not quite ready to point him at much of anything higher than the aforementioned crossrails, flower boxes and small white panel. After all, I bought him in October and it’s taken me this long to get him to canter in a straight line rather than shimmying down the arena rail contorted like a crab.

As you can imagine, the jumping courses Debbie and I perform evoke reactions from spectators ranging from admiration to riotous laughter. Sometimes Debbie gets lost midway and goes off course… even though there are only a half-dozen jumps on our pre-planned route.

“Debbie,” I’ll say, “I think your advanced age is affecting your short-term memory.”

Then it’ll be my turn. Last Wednesday, Danny jumped a dozen crossrails, ten different ways. He stays quiet and safe, but consistency is definitely not his forte.

After one lackluster effort, Debbie chided me with, “Hey, that last time he didn’t even pick up his legs.”

Thankfully, as we advanced to trotting and then cantering the white panel, both Debbie’s mental acuity and my horse’s jumping style improved. Apparently we all sharpen up when we’re faced with a bit of a challenge. Maybe that’s a lesson I can take away from my weekly Wednesday adventure.