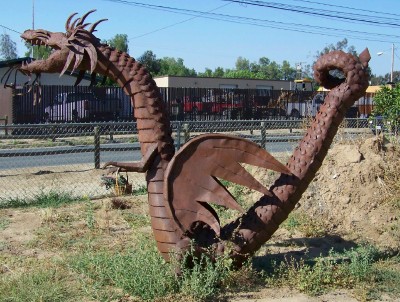 Wally has met his match, and it’s a big metal dragon statue.

I believe I speak for all trail riders when I say that avoiding a Spook Fest is one of our primary goals. Fortunately, most of the time the scariest things we encounter are rather mundane, like blowing plastic bags, school buses and yippy little dogs. It might take a moment, but our horses eventually process the situation, analyze the potential threat (or lack thereof) and move on. It’s when our horses can’t categorize the object that trouble ensues. At least that’s my theory.

As a case in point I offer up Wally and the way he reacts to a metal dragon statue in our town. It sits on a sparse corner lot several blocks from my house. I hesitate to say the rusty sculpture is life-sized because I’m not quite sure how large dragons are in real life. But this thing’s pretty big. It’s also quite detailed, all the way down to the flaming tongue and outstretched talons. Why someone thought it looked cool presiding over a patch of dirt and wild mustard plants I’m not sure, but there it sits. And Wally simply cannot handle it.

Keep in mind that Wally is what I consider a very brave, confident horse. In any group or herd situation, he is the alpha horse. Combine that attitude with years of professional western training and, generally speaking, he’s an awesome horse to ride on the trails. He splashes through water crossings like an amphibian. He’s fearless around traffic. He trudges up hills like a bulldozer. But when faced with a dragon? He falls apart.

How does Wally react to the dragon? Stark fear. His muscles become rigid, his eyes pop out of his head like they’re spring-loaded, and he exhibits a bold desire to go in any direction, providing it’s not in the direction of the dragon. Wally’s encounters with the dragon could be Exhibit A in “Proof that a Human Being Cannot Physically Coerce a Horse into Going Someplace it Does Not Want to Go.”

And yet, I did succeed, eventually, in getting him past the dragon. Twice.

The trade-off? I had to spend a considerable amount of time standing next to a sagging chain link fence, under the gaze of a mythical beast, while holding the reins of a snorting horse. I’ll share that whole experience—recounted with a humorous slant—in my next blog post.