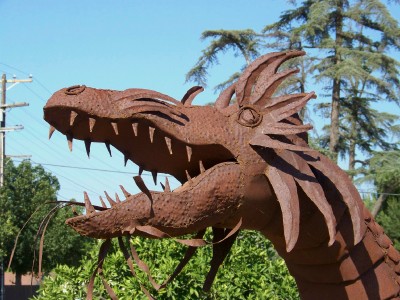 Just in case you come across a dragon like this on your next trail ride, I have some tips to help you slay it.

As I mentioned in my previous blog posting, my blustery, in-your-face Paint gelding, Wally, has finally met his match. And it’s a dragon statue sculpted out of rusted metal. After Wally suffered an existential crisis the first time he encountered the dragon, you’d think that I’d simply avoid riding past it again.

But then, you’d be wrong.

Because I’m nothing if not a horsewoman who wants to prove a point to her horse. And that point would be that metal dragons are not going to kill us anytime soon so we can just continue on past it thank you very much you idiot sorrel gelding.

Just in case you might encounter a dragon while riding, I’d like you to be prepared. So, with a hint of humor, I offer up How to Slay a Dragon in 13 Steps:

Eventually head home, both you and the horse exhausted from the ordeal of slaying a dragon.