Okay, show of hands. How many of you admit that you’ve taught at least one dog to jump like a horse? My sister and I certainly did. On many a lazy summer afternoon we’d come home from the barn and concoct a backyard course. We’d use improvised elements—upturned wheelbarrow, a sideways wagon, leaf rakes hung across terracotta pots—and then sweet talk our family dogs into becoming surrogate hunters and jumpers. In retrospect it was sort of like a modern day dog agility course.

Back then, I used to marvel at the odd similarities between the mechanics of a dog’s jumping style and that of a horse. Just like horses, some dogs put real panache into their jumping efforts; they soared through the air like acrobats. Then there were the dogs (and horses) that simply got from one side of the obstacle to the other as expediently as possible.

So I had to laugh when my sister emailed me photos of her dogs competing in a hurdle race.

She hauls her dogs to terrier meets almost every month, and the hurdle race is one of the most riotous events. That’s probably because most of the competitors are Jack Russell terriers, who are famous for putting a clown car spin on any kind of organized activity.

Here are the photos. See what you think. For comparison’s sake, I’ve also included a couple of photos of me aboard horses that seemed to jump with the same sort of style. 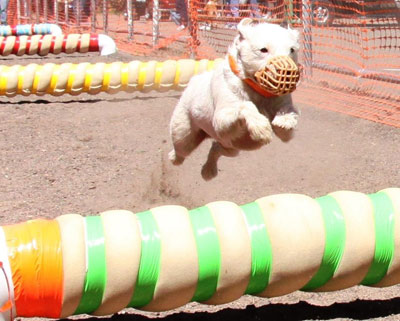 Much like a 17-hand warmblood, Snowden often dwarfs the other Jack Russell terriers in his class. He also jumps with the style of many warmbloods: his knees are pulled up to his chin and he’s flying inches above the hurdle. Because he jumps with such exuberance, his paws are flipped out, eager to find earth and bound toward the next hurdle. In horses, we call this form “stylistic reaching.” 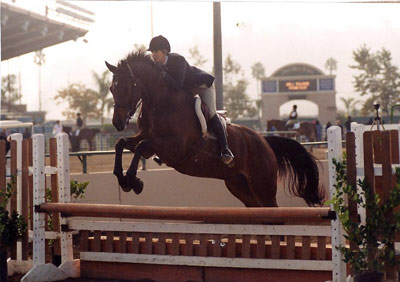 My sweet gelding Hammie was a Trakehner-Dutch warmblood cross. Like Snowden, he jumped with a lot of flair. He was always had quite an arc to his jump, too. And yes, he was a bit of a “reacher” too. 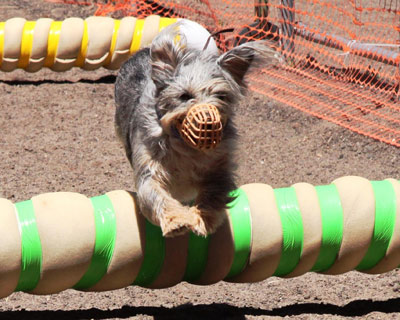 Sailor is… some kind of terrier mixed with some other kind of… dog. Though he lacks a fancy pedigree and a fancy style of jumping, he has a loyal heart and a darling temperament. You can always trust him to get over the hurdles. He’s just not going to do it with any pizzazz. 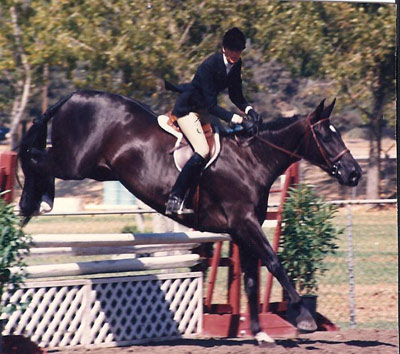 My black mare Syracuse had a mysterious background. She was some kind of warmblood. Allegedly. She was a very dependable jumper, but a lazy one. Here she is, just skimming over the back rail of this jump. As far as she was concerned, that was good enough.

See how a dog’s jumping style can mirror that of a horse? Or have I judged too many hunter and jumper classes? Although thinking about horse shows makes me wonder if requiring muzzles might be a good idea. At least for some of the humans.