We’ve had a visitor this summer and truly, it’s time for him to leave. He’s over-stayed his welcome. His name is Petey the Pigeon. 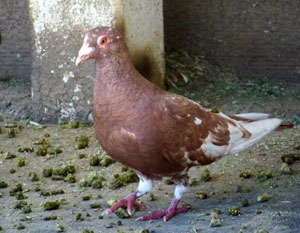 Meet Petey the Pigeon. Isn’t he cute, the way he munches on leftover pellets and carrots? Now please make him leave.

There are all sorts of critters that coexist with Ron, the horses and me on and around this property, from coyotes to hawks, bats, rabbits and assorted snakes. But pigeons are especially messy and when one in particular becomes a pest by repeatedly pooping in my horses’ water troughs, thereby fouling the water, then I have to take action.

Plus, Petey refuses to sleep in the barn rafters like a regular pigeon or hang out in the paddock, perched in one of the pepper trees. Instead, he prefers to sit atop the canvas awning outside my kitchen window. And quite frankly, after scooping horse manure several times a day the last thing I want to do is scoop pigeon poop off an awning or scrape it off my kitchen window.

At first, I thought Petey was a wayward homing pigeon. He’s a unique coppery color, and he seems remarkably friendly. So when he first arrived I looked for a band on one of his legs. Twice since we’ve lived here, homing pigeons have stopped by our house and I’ve caught them, read the phone number on their leg bands, and returned them to their owners. But regardless whether Petey lost his ID band or he’s just a really sociable feral pigeon, he has to go. And he won’t.

How can I blame him? Each afternoon, when I feed Wally and Danny their pellets and carrots, Petey is right there under their noses, pecking up every morsel and tidbit the horses happen to drop. It’s a veritable pigeon feast.

Finally, last week, I came up with a plan. I decided to catch him, figuring that surely he would be better off living his pigeon lifestyle someplace else. You know, someplace else where a husband and wife weren’t on the verge of attempting to strangle him.

So early one morning, before the sun had risen above the hills, I went out in my pajamas (which, for the purposes of creating the visual image necessary for this tale, I must explain are wildly colored and mismatched in both fabric and pattern) and began walking toward the feed room. Sure enough, in anticipation of an early morning meal, here came Petey, swooping down at my feet. I decided to treat him like a half-tamed chicken: I held out my arms and shushed him forward, herding him into the feed room. And then I followed him inside and closed the door.

He had nowhere to go. Aha! So I scooped him up and ran inside the house and grabbed the closest thing I could think of that would work as a pigeon carrier: a paper shopping bag! I folded up the top, snatched my truck keys, and drove Petey out of my neighborhood.

I headed all the way up a series of long, winding roads that lead to a golf course nestled behind the hills. I kept going past the country club until I reached field filled with scrub brush and willows, and then parked my truck. I got out and started walking through the chaparral in my foam bedroom slippers. I’m sure I looked like a deranged homeless woman, wandering around a field with a grocery bag in her hand. But I was on a mission. I opened the bag and out plopped Petey. He turned and looked at me and I told him to be a good pigeon, pointed toward the sparrows, pigeons and mockingbirds in the surrounding trees, and instructed him to make some new feathered friends. And then I left.

When I got home Petey was there, waiting for me in the driveway.

The very next day I called my sister and told her the tale of Petey. She promised to take him if I could catch him again. She lives on the other end of the canyon, in a different county, in fact, and has raised plenty of birds before.

“He can live in one of our coops in the backyard,” she said.

So Jill and I tossed out some horse pellets and lured Petey into the barn. With a little bit of pigeon wrangling we caught him. And then he got stuffed back into yet another grocery bag and deposited onto the front seat of Jill’s car.

“Before I head home I have to stop by Mom’s and pick up my dogs,” she said as she was driving away.

That should’ve been a clue that Petey’s travel plans were about to change.

About half an hour later the phone rang. It was my sister. All she said was, “Is he there yet?”

I dropped the phone and ran to look out the kitchen window. There was Petey, bobbing around Wally’s paddock, looking a little bit tired but otherwise perfectly content to be back at the Hale horse ranch.

“What the heck happened?” I yelled into the phone.

“Well,” my sister began, “I got the dogs into the car and started down Mom’s driveway. And then the pigeon started wrestling around inside that bag and my dogs heard him. All I could think of was, ‘Here I am, driving a car with Jack Russell terriers in the back seat, and a pigeon that’s about to get loose in the front seat. What’s wrong with this picture?’ So I stopped the car and let him go.”

I understood why she did what she did—the last thing I needed was to be responsible for my sister’s demise due to a poorly planned pigeon transport—but I was speechless nonetheless.

“It was pretty amazing, actually,” my sister continued. “Petey got out of the bag, sort of looked around, and then took off. He flew around in one, maybe two little circles overhead, and then whoosh! He made a beeline right back in the direction of your house.”

Needless to say, Petey is now a little bit more wary of me than before. But over time I’m going to win back his confidence. And then I’m going to catch him and deliver him to one of the homing pigeon hobbyists in town. I’ll beg them to brainwash Petey into joining a different brood. I’ll relate that whole birds of a feather flocking together scenario.

In the meantime I have to get outside and give Wally and Danny their pellets and carrots. I know it’s lunchtime because I have a fat red pigeon sitting on the awning, staring at me through my kitchen window.